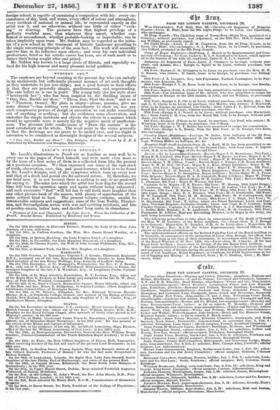 On the 16th December, in Harcourt Terrace, Dublin, the Lady of the Hon. John Jocelyn, of a son, still-born.

On the 18th, in Carlton Gardens, the Hon. Mrs. James Stuart Wortley, of a daughter.

On the 7th December, at Baltimore, C.S , suddenly, Henry George Kuper, Esq., British Consul at that city, eldest son of the Rev. William Kuper, D.D., K.H., Chaplain to the Royal German Chapel, after upwards of thirty years passed in her Majesty's service; in hie 53d year. On the 7th, at Malta, Lieutenant James Nixon G. Macartney, Fifty-seventh Re- ghnerit, son of Brigadier-Major Macartney; in his 20th year. He was present at the attack- of-the Redan and capture of Sebastopol.

On the 9th, at the residence of her son, Dr. Archibald Armsifong, Sligo, Eleanor, relict of the late Dr. William Armstrong, of that town ; in her 100th year. On the 15th, at Bishopsteignton, Devonshire, General the Hon. William Henry Gardner, Colonel-Commandant of the Tenth Battalion Royal Artillery ; in his 82d pear.

On"the 16th, iit Paris, the_Han. Gilbert Stapleton, of Ditton Hail, Lancashire, eldest surviving brother of the-last and uncle of the present Lord Beaumont ; in his 48th year. -On-the 18th, in Grafton Street, Fitzroy Square, Mary Ann Burnett, sister of the late Gilbert Burnett, Professor of Botany : he was the last male descendant of Bishop Burnett. On the 18th, at Leadenham, Lincoln, the Right Hon. Lady Jane Sherard, fourth daughter of the late Philip, Earl of Harborough, and sister of the present Earl. On the 19th, at Canaan House, Edinburgh, the Moat Noble John Marquis of Queensberry; in his 78th year. On the 21st, in Upper Mount Street, Dublin, Rear-Admiral Frederick Augustus 'Wetherall, of Baling, Middlesex. On the 21st, at the College, St. John's Wood, the Rev. John Harris, D.D., Prin- cipal of New College, -London ; in his 54th year. ' On the 22d, Rear-Admiral Sir Henry Hart, K.C.H., Commissioner of Greenwich Hospital. ' On the 24th, in Dover Street, Dr. Paris, President of the College of Physicians ;