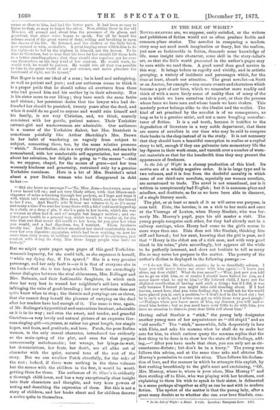 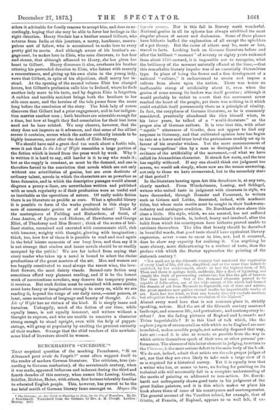 IN THE ISLE OF WIGHT.*

NOVEL-READERS are, we suppose, easily satisfied, or the 'writers and publishers of fiction would not so often produce feeble and common-place stories. The novelist in composing a modern story may not need much imagination or fancy, but the realism, just now so fashionable in fiction, demands some knowledge of life, some insight into character, some skill in the story-teller's art, so that the little world presented in the author's pages may be ours while we read them. A good novel does good service in this way. It brings before us rapidly and vividly, and in artistic grouping, a variety of incidents and personages which, for the time at least, absorb our attention. The great novelist—a Scott or an Austen, for example—can create events and characters which become a part of our lives, which we remember more readily and think of with a more lively sense of reality than of many of the acts in which we have ourselves taken part, or than the persons whose faces we have seen and whose hands we have shaken. This masterly power belongs alike to the idealist and the realist. The kind of art practised by the novelist is of no consequence, so long as he is a genuine artist, and not a mere bungling manufac- turer of fiction. It is a sad truth, because it testifies to the degradation of literature in a very noble department, that there are scores of novelists in our time who may be said to compose their books in the shop instead of in the study. It is not necessary that they should have a beautiful conception to realise or a capital story to tell, enough if they can galvanise into momentary life the lay-figures in their work-room, and varnish over a number of worn- out materials so that for the hundredth time they may present the appearance of freshness.

In the Isle of Wight is a clumsy production of this kind. Its merits are of a wholly negative order. It is in large type and in two volumes, and it is free from the doubtful morality in which some of our third-rate novelists, especially our women novelists, are accustomed to trade. The novel is not sensational, nor is it written in conspicuously bad English ; but it is common-place and mindless, and destitute, so far as we have been able to discover, of a single literary merit.

The plot, or at least as much of it as will serve our purpose, is soon told. Elsie, the heroine, is on a visit to her uncle and aunt at the Vicarage of Lexton, when Henry Sinclair, who was for- merly Mr. Murray's pupil, pays his old master a visit. The young people recognise each other, for they had already met in a railway carriage, when Henry had come to the girl's rescue in more ways than one. Elsie does not like Sinclair, thinking him stiff and formal ; but her aunt, knowing that the girl is poor, and that "Henry is the eldest son of a rich man, and with very good blood in his veins," plots accordingly, but appears all the while to be perfectly innocent, and does not hesitate to tell as many fibs as may serve her purpose in the matter. The poverty of the author's diction is displayed in the following passage :—

", I do not like Mr. Sinclair, auntio ; he is so dreadfully solemn. I hope you will never leave me alone with him again.'—' I leave you alone, my dear child! What do you mean ?'—' Why, just now you told me to go on with him, or of course I should have waited for you, as I never know what to say to him.'—' My beloved child, I have not the slightest recollection of having said such a thing ; but if I did, it was only because I feared you might take cold standing about. If I had known, sweet love, that you were feeling shy, I would not for the world have placed you in such a position.'—•I don't feel in the least shy ; but he is such a stick, and I never can got on with these very good people.' =Perhaps when you know more of him, my dearest, you will under- stand him better ; but as you need have very little to do with him, you have no occasion to distress your dear little self about him.'"

giving called Sinclair a "stick," the young lady designates another young man of her acquaintance an "old stupid" and an "old noodle." The "stick," meanwhile, falls desperately in love with Elsie, and asks his mamma what he shall do to make her care for him, to which curious query the mamma replies that the first thing to be done is to show her the state of his feelings, add- ing,—" After you have made that clear, you can only act as cir- cumstances dictate ; but don't be in a hurry." The young man follows this advice, and at the same time asks and obtains Mr. Murray's permission to court his niece. Then follows his declara- tion of love, and the manner in which he attempts this exploit, by first rushing breathlessly to the girl's aunt and exclaiming, "Oh, Mrs. Murray, where is, where is your niece, Miss Murray ?" and then striding off to Elsie, who was playing with her brothers, and. explaining to them his wish to speak to their sister, is delineated in a scene perhaps altogether as silly as can be met with in modern fiction. The upshot of the matter is that the young lady, after a great many doubts as to whether she can ever love Sinclair, con-

* In the Isle of Wight: a Novel. 2 cols. London: Sampson Low. 1973. eiders it advisable for family reasons to accept him, and does so ac- cordingly, hoping that she may be able to force her feelings in the right direction. Henry Sinclair has a brother named Gilbert., who returns from India at this juncture, a merry, handsome, unscru- pulous sort of fellow, who is accustomed to make love to every pretty girl he meets. And although aware of his brother's en- gagement, he makes love to Elsie, who soon discovers, to her fear and shame, that although affianced to Henry, she has given her heart to Gilbert. Henry discovers it also, overhears his brother uttering his pretended devotion to Elsie, who listens with scarcely a remonstrance, and giving up his own claim to the young lady, vows that Gilbert, in spite of his objections, shall marry her in- stead. At the opening of the second volume Elsie has changed lovers, but Gilbert's profession calls him to Ireland, where he finds another lady more to his taste, and by degrees Elsie is forgotten A sudden and terrible accident brings both the brothers to her side once more, and the heroine of the tale passes from the scene long before the conclusion of the story. The Irish lady of course discovers that Gilbert had a prior engagement, and in her indigna- tion marries another man ; both brothers are miserable enough for a time, but how at length they find consolation for their lost loves need not be here related. We may observe, however, that the story does not improve as it advances, and that some of the silliest scenes it contains, scenes which the author evidently intends to be highly humorous, occur after the death of Elsie Murray.

We should have said a great deal too much about a feeble tale, were it not that In the isle of Wight resembles a large portion of the fiction which is issued from the press week by week. Why it is written it is hard to say, still harder is it to say who reads it ; but as the supply is constant, so must be the demand, and one is therefore forced to the conviction that novels which are not only without one scintillation of genius, but are even destitute of ordinary talent, novels in which the characters are as powerless as bran dummies, and in which the descriptive passages would almost disgrace a penny-a-liner, are nevertheless written and published with as much regularity as if their production were as useful and as inevitable as the operations of nature. Of really noble fiction there is no literature so prolific as ours. What a splendid library it is possible to form of the works produced in this shape by men of consummate genius or of admirable talent! Think of the masterpieces of Fielding and Richardson, of Scott, of Jane Austen, of Lytton and Dickens, of Hawthorne and George Eliot, of Thackeray and Miss Bront6 ; think of the scores of bril- liant stories, conceived and executed with consummate skill, rich with humour, weighty with thought, glowing with imagination ; think, too, how few of these it is possible to read and read again in the brief leisure moments of our busy lives, and then say if it is not strange that aimless and inane novels should be so readily accepted by the public! We are far indeed from saying that every reader who takes up a novel is bound to select the choice productions of the great masters of the art. Men and women are too happily constituted to need always the rarest wine, the love- liest flowers, the most dainty viands. Second-rate fiction may sometimes afford very pleasant reading, and if it be the honest work of conscientious novelists, may deserve the temporary praise it receives. But such fiction must be sustained with some ability, must have fancy or imagination enough to carry us, while we are reading it, beyond the range of our daily cares,—must possess, at least, some animation of language and beauty of thought. In the isle of 117iglit has no virtues of the kind. It is simply inane and harmless. Unhappily, much of the fiction of our time, while equally inane, is not equally innocent, and writers without a thought to express, and who are unable to conceive a character strong enough to stand upright, even with the help of puppet- strings, will grasp at popularity by exciting the prurient curiosity of their readers. Strange that the chief vendors of this unwhole- some kind of literature should be women.