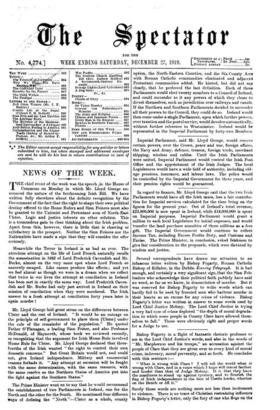 Mr. Lloyd George laid great stress on the differences between

Ulster and the rest of Ireland. " It would be an outrage on the principle of self-government to place them [Ulster] under the rule of the remainder of the population." He quoted Father O'Flanagan, a leading Sinn Feiner, and also Professor McDonald, of Maynooth, whose book we reviewed recently, as recognizing that the argument for Irish Home Rule involved Home Rule for Ulster. Mr. Lloyd George declared that three- fourths of the Irish wanted " the right to control their own domestic concerns." But Great Britain would not, and could not, give Ireland independence. Military and commercial reasons forbade it. " Any attempt at secession will be fought with the same determination, with the same resource, with the same resolve as the Northern States of America put into the fight against the Southern States."