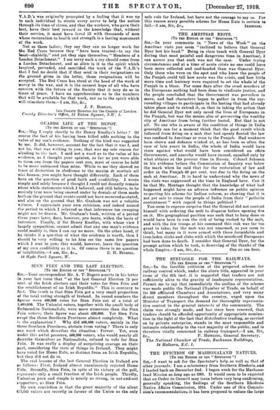 tab STRUGGLE FOR THE RAILWAYS.

[To THE. EDITOR OF TEE " SPECTATOR.") SIR,—In the forcible criticism of the proposed scheme for railway control which, under the above title, appeared in your issue of the 6th inst. it is suggested that traders are not sufficiently alive to the gravity of inadequate representation. Permit me to say that immediately the outline of the scheme was made public the National Chamber of Trade, on behalf of its 250 affiliated Chambers and Associations, and very many direct members throughout the country, urged upon the Minister of Transport the demand for thoroughly representa- tive control in the general interests of the community. The claim was strongly made, and has since been renewed, that traders should be afforded opportunity of appropriate nomina- tion in the light of the fact that distributive trading, as carried on by private enterprise, stands in the most responsible and intimate relationship to the vast majority of the public, and is therefore vitally concerned in railway transport.—I am, Sir, &c., P. HOWLING, General Secretary. The National Chamber of Trade, Buchanan Buildings, 24 Holborn, B.C. 1.