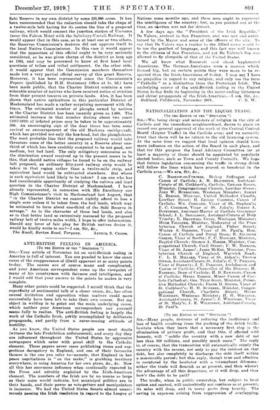 NATIONALIZATION AND THE LIQUOR TRADE.

Sue—We, being clergy and ministers of religion in the city of Carlisle and the immediate neighbourhood, desire to place on record our general approval of the work of the Central Control Board (Liquor Traffic) in the Carlisle area; and we earnestly trust that there will be no return to the old licensing system. At the same time we suggest that local opinion should have more influence on the action of the Board in each place, and that for this purpose the Local Advisory Committee (or at least a majority of them) should be appointed by popularly elected bodies, such as Town and County Councils. Wo hope that future legislation concerning the traffic in strong drink will follow the lines which have proved so beneficial in the Carlisle area. We are, Sir, ho.,