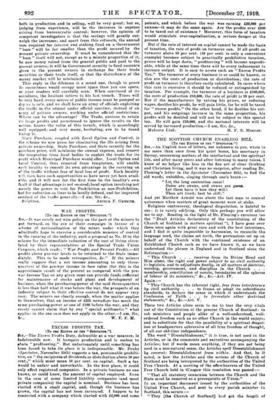 ITo TILE EDITOR Or THE " SPECTATOR.") &R,—The Excess Profits Duty, defensible as a war measure, is indefensible now. It hampers production and is useless to abate "profiteering." But unfortunately until something has been found to take its place it is indispensable. Mr. Drake (Spectator, November 15th) suggests a tax, presumable prohibi- tive, on " the recipients of dividends or distribution above 10 per cent.," which must mean 10 per cent. on capital. Sucli a tax would be unfair and unworkable. In the first place, it could only affect registered companies. In a private business no one knows, or could know, the amount of capital employed. Even in the case of some limited liability companies (and most private companies) the capital is nominal. Business has been started with a small capital, and, though the business has grown, the capital has not been increased. I happen to be connected with a company which started with £2,000 and some patents, and which before the war was earning £20,000 per annum—it may do the same again. Are the profits over £200 to be taxed out of existence ? Moreover, this form of taxation would stimulate over-capitalization, a serious danger at the present time.

But if the rate of interest on capital cannot be made the basis of taxation, the rate of profit on turnover can. If all profit on turnover above 10 per cent. (10 per cent. is only a convenient example) becomes subject to practically prohibitive taxation, prices will be kept down, " profiteering " will become unprofit- able, while at the same time there will be every inducement to increase output. It is easy to assess such an "Excess Profits Tax." The turnover of every business is or could be known, so also are the costs of production or distribution; the rate of profit on turnover is therefore easily calculated. In cases where this rate is excessive it should be reduced or extinguished by taxation. For example, the turnover of a business is £100,000, the costs of production £90,000, the rate of pri,fit is 10 per cent. But if the manufacturer by raising his prices, or reducing wages, doubles his profit, he will gain little, for he will be taxed for " excess profits." On the other hand, if he doubles his out- put, and his outgoings increase in the same proportion, his profits will be doubled and will not be subject to this special tax. He will gain £10,000, and the national interests will be served by increased production.—I am, Sir, &c.,