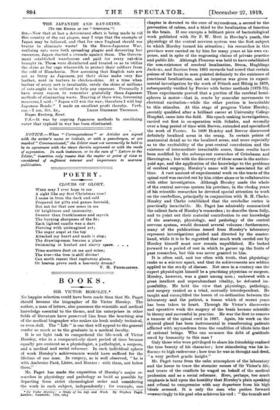 Sm,—Now that at last a determined effort iS being made to rid this country of the rat plague, may I urge that the example of Japan may be followed, and that for once England should use brains to eliminate waste? In the Russo-Japanese War, realizing rats were both spreading plague. and devouring her resources, Japan started a crusade against them. The Govern- ment established warehouses and paid for every rat-skin brought in. These were disinfected and treated so as to utilize the skins as fur caps wherewith to protect their soldiers from the cold of Manchuria. Now assuming that English rats are not as furry as Japanese, yet their skins make very fine leather, next in texture to chicken-skins. At a time when leather of every sort is invaluable, surely the skins of millions of rats ought to be utilized to help pay expenses. Personally I have every reason to remember gratefully these Japanese methods of eliminating waste. Hearing of these wise, foreseeing measures, I said : " japan will win the war; therefore I will buy Japanese Bonds." I made an excellent profit thereby. Verb.

P.S.—It was by copying Japanese methods in sterilizing water that typhoid in war has been eliminated.