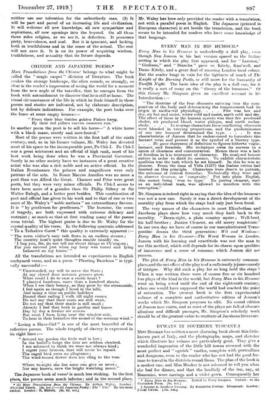 EVERY MAN IN HIS HUMOUR.*

Every Man in his Humour is undoubtedly a dull play, even though Ben Jonson in his last version spared us the Italian setting in which the play first appeared, and for " Lorenzo," " Giuliano," and " Biancha " gave us Kitely, Kno'well, and

Dame Kitely, and a great deal of amusing London local colour. But the reader longs in vain for the lightness of touch of The Knight of the Burning Pestle, or still more for the humanity of Twelfth Night. The basic idea of the play is a dull one, for it is really a sort of essay on the theory of the humours." Of this theory Mr. Simpson gives an excellent account in his Introduction :-

" The doctrine of the four elements entering into the com- position of the body and determining the temperament had its origin in mediaeval physiology. . . . Fire was hot and dry, air hot and moist, water cold and moist, earth cold and dry. The effect of these in the human system was that fire produced choler, air produced blood, water phlegm, and earth melan- choly. . .In average characters these conflicting elements were blended in varying proportions, and the predominance of any one humour determined the type. . . . It was characteristic of Jonson that he endeavoured to formulate this inexact term and present it as the symbol of a literary type. . . . He gave sharpness of definition to figures hitherto vague, inexact, and formless: His technique owes its success to a union of clearness and concentration. Hence there was a lack of freedom in his treatment of character. He analysed human nature in order to distil its essence. To exhibit characteristic qualities was the task which he set himself. In this he was no pioneer. From the time of Vida (1527) the Italian critics had insisted on this principle. Characters were drawn to pattern, the outcome of critical formulae. Technically they were said to observe decorum, or congruity.' Put into plain English, this meant being ' true to type.' No jarring element, such as an individual trait, was allowed to interfere with this conception."

Mr. Simpson is indeed right in saying that the idea of the humours was not a new one. Surely it was a direct development of the morality play from which the stage had only just been freed.

The very names of the characters in most Elizabethan and Jacobean plays show how very much they hark back to the morality. " Down-right, a plain country squire ; Well-bred, his half-brother ; Justice Clement, an old merry magistrate." In our own day we have of course in our unsophisticated Trans- pontine drama the third generation: Wit and Wisdom— Every Man in his Humour—The Worst Woman in London.

Jonson with his learning and exactitude was not the man to use this method, which still depends for its charm upon qualities of innocence and a sense of romance which Jonson did not possess.

The plot of Every Man in his Humour is extremely common place,and the net effect of the play is of a sufficiently jejune comedy of intrigue. Why did such a play for so long hold the stage ? When it was written there were of course five or six hundred less plays of the kind in the world, but Every Man in his Humour went on being acted until the end of the eighteenth century,

when one would have supposed the world had reached the point of saturation. The present book is the first experimental

volume of a complete and authoritative edition of Jonson's works which Mr. Simpson proposes to edit. No sound edition of Jonson now exists, and as most of the plays are fulled obscure allusions and difficult passages, Mr. Simpson's scholarly work should be of the greatest value to students of Jacobean literature-