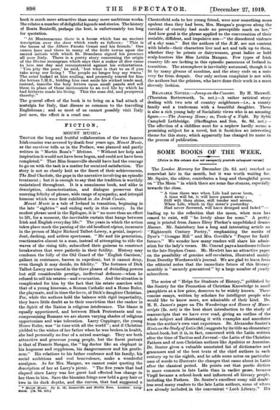 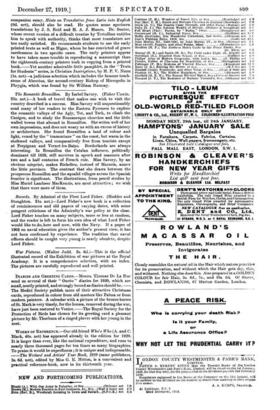 The series of " Helps for Students of History," published

the Society for the Promotion of Christian Knowledge in small pamphlets at a low price, deserves to be widely known. These concise essays, written by scholars for intelligent people who would like to know more, are admirable of their kind. Dr. M. R. James's paper on The Wanderings and Homes of Manu- scripts (2s. net) is the best short introduction to the study of manuscripts that we have ever read, giving an outline of the whole subject and illustrating it with examples and anecdotes from the author's own vast experience. Dr. Alexander Souter's Hints on the Study of Latin (8d.) suggests by its title an elementary school-book, but it is, in fact, concerned with the Latin written after the time of Tacitus and Juvenal—the Latin of the Christian Fathers and of non-Christian authors like Apuleius or Ausonius. Dr. Souter gives a valuable annotated list of dictionaries and grammars and of the best texts of the chief authors in each century up to the eighth, and he adds some notes on particular uses of words to illustrate the changes that came about in Latin after the classical period. He points out that poetic diction is more common in late Latin than in earlier prose, becauFe Virgil became a school-book and influenced all literary people, including the Fathers. Dr. Souter's excellent essay will doubt- less send many readers to the late Latin authors, some of whom are already included in the convenient Loeb Library." His

companion essay, Hints on Translation from Latin into English (6d. net), should also be read. He quotes some specimen translations by J. S. Reid and H. A. J. Munro. Dr. Souter, whose recent version of a difficult treatise by Tertullian entitles him to speak with authority, thinks that most translators are too easily satisfied. He recommends students to use the early printed texts as well as Migne, whom he has convicted of grave carelessness in two specific cases. The early printers appear to have taken more trouble in reproducing a manuscript than the eighteenth-century printers took in copying from a printed book.—Yet another admirable little pamphlet, in the Texts for Students" series, is Christian Inscriptions, by H. P. V. Nunn (Is. net)—a judicious selection which includes the famous tomb- stone of Abereius, the second-century Bishop of Hieropolis in Phrygia, which was found by Sir William Ramsay.