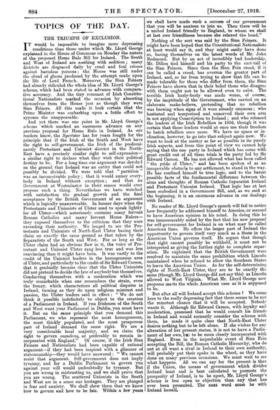 THE TRIUMPH OF EXCLUSION.

IT would be impossible to imagine more depressing conditions than those under which Mr. Lloyd George explained in the House of Commons on Monday the nature of the proposed Home Rule Bill for Ireland. The South and West of Ireland are seething with sedition ' • many districts are disgraced daily by cruel and foul crimes against harmless persons • the House was still under the cloud of gloom produced by the attempt made upon the life of Lord French. Moreover, the Sinn Feiners had already ridiculed the whole idea of Mr. Lloyd George's scheme, which had been stated in advance with compara- tive accuracy. And the tiny 'remnant of Irish Constitu- tional Nationalists marked the occasion by absenting themselves from the House just as though they were Sinn Feiners. All this made it look certain that the Prime Minister was embarking upon a futile effort to appease the unappeasable.

And yet there was one point in Mr. Lloyd George's scheme which marked an enormous advance on any previous proposal for Home Rule in Ireland. As our readers know, the Spectator has for years fought for the principle that if the Irish of the South and West have the right to self-government, the Irish of the predomi- nantly Protestant and Unionist district in the North- East have a precisely similar right to self-expression— a similar right to declare what they wish their political destiny to be. For a long time our argument was derided on the ground that Ireland was an entity that could not possibly be divided. We were told that " partition " was an inconceivable policy ; that it would annoy every- body in Ireland without exception ; and that no Government at Westminster in their senses would ever propose such a thing. Nevertheless we have watched with satisfaction the gradual growth and the final acceptance by the British Government of an argument which is logically unanswerable. In former days when the Protestants and Unionists of Ulster used to speak lightly for all Ulster—which notoriously contains many fervent Roman Catholics and many fervent Home Rulers— they exposed themselves to the criticism that they were exceeding their authority. We longed to see the Pro- testants and Unionists of North-East Ulster basing their claim on exactly the same ground as that taken by the Separatists of the South and West. For so long as the Ulster claim had an obvious flaw in it, the voice of Pro- testant and Unionist Ulster rang less true and was less convincing than it might have been. It was vastly to the credit of the Unionist leaders in the homogeneous area of Ulster, and particularly to the credit of Sir Edward Carson, that it gradually became clear that the Ulster Unionists did not pretend to decide the fate of anybody but themselves. Conducting themselves with a moderation which was truly remarkable when one remembers the strain, even the frenzy, which characterizes all political disputes in Ireland, turning as they do upon religious mistrust and passion, the Ulster leaders said in effect : " We do not think it possible indefinitely to object to the creation of a Parliament in Ireland. If you Irishmen of the South and West want your Parliament in Dublin, you must have it. But on the same principle that you demand this Parliament,- we who represent the most homogeneous, the most thickly populated, and the most prosperous part of Ireland demand the same right. We are a very considerable local majority, and we claim the right to govern ourselves, or preferably to remain in- corporated with England." Of course, if the Irish Sinn Feiners and Nationalists had been capable of rational argument—if they had been inspired with a glimmer of statesmanship—they would have answered : " We cannot resist that argument. Self-government does not imply tyranny, and for a Dublin Parliament to govern you against your will would undoubtedly be tyranny. But you are wrong in mistrusting us, and we shall prove that you are wrong. The scattered Unionists in the South and West are in a sense our hostages. They are plunged in fear and anxiety. We shall show them that we know how to govern and how to be fair. Within a few years we shall have made such a success of our government that you will be anxious to join us. Then there Will be a united Ireland friendly to England, to whom we shall at last owe friendliness because she relaxed the bond."

Nothing of the sort was said by the Sinn Feiners. It might have been hoped that the Constitutional Nationalists at least would say it, and they might easily have done so, basing themselves on the latest words of Mr. John Redmond. But by an act of incredibly bad leadership, Mr. Dillon tied himself and his party to the cart-tail of the Sinn Feiners. Since then the Sinn Fein creed, if it can be called a creed, has overrun the greater part of Ireland, and, so far from trying to show that life can be made tolerable for those who differ from them, the Sinn Feiners have shown that in their belief those who disagree with them ought not to be allowed even to exist. The terrible Irish hurly-burly was made worse, of course, by the ineptitude of the Government, who carried on an elaborate make-believe, pretending that no rebellion was brewing when signs of it were already ominous ; who hesitated and temporized and unnerved their own arm in not applying Conscription to Ireland ; and who released the leaders of the Irish Rebellion in 1916, though it was certain that those leaders would at once use their freedom to hatch rebellion once more. We have no space or in- clination, however, to go into that subject again now.' We want to look at the matter as far as possible in its purely Irish aspects, and from this point of view we cannot help saying that the one party in Ireland which has come with great credit out of all these trials is the party led by Sir Edward Carson. He has not allowed what has been called " the pride of Ulster," and has been spoken of as an insuperable obstacle to any settlement, to stand in the way. He has confined himself to true logic, and to the barest possible facts of the fundamental difference between the aims and thoughts of Roman Catholic separatist Ireland. and Protestant Unionist Ireland. That logic has at last been embodied in a Government Bill, and, as we said at the beginning, it is an enormous advance in our dealings with Ireland.

No reader of Mr. Lloyd George's speech will fail to notice how frequently he addressed himself to America, or seemed to have American opinion in his mind. In doing this he was immeasurably aided by the fact that his new proposal for self-government for Ireland is on what may be called American lines. He offers the larger part of Ireland the opportunity to govern itself very much as a State in the American Union governs itself. He argues that though that right cannot possibly be withheld, it must not be interpreted as giving the further right to complete separ- ation. He, explained that the British Government were resolved to maintain the same prohibition which Lincoln maintained when he refused to allow the Southern States to leave the American Union. As for the self-determining rights of North-East Ulster, they are to be exactly the same (though Mr. Lloyd George did not say this) as Lincoln allowed to West Virginia. What Mr. Lloyd George now proposes meets the whole American case as it is supposed to be.

But after all will Ireland accept this scheme ? We come here to the really depressing fact that there seems to be not the remotest chance that it will be accepted. Nobody wants it. Although Sir Edward Carson, with loyalty and moderation, promised that he would consult his friends in Ireland and would earnestly consider the scheme with them, he made it quite clear that North-East Ulster desires nothing but to be left alone. If she wishes for any alteration of her present status, it is not to have a Parlia- ment of her own, but to be more closely incorporated with England. Even in the improbable event of Sinn Fein accepting the Bill, the Roman Catholic Hierarchy, who do not at all want a rival in Ireland to their own authority, will probably put their spoke in the wheel, as they have done on many previous occasions. We must wait to see what happens. All we can say for the present is that if the Union, the means of government which divides Ireland least and is best calculated to promote the prosperity of Ireland, is to be upset, Mr. Lloyd George's scheme is less open to objection than any that has ever been presented. The next word must be with Ireland herself.