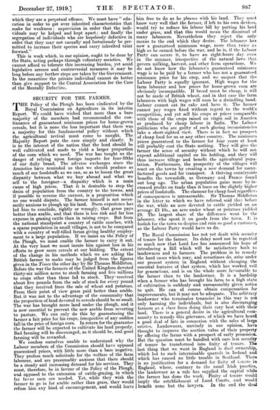 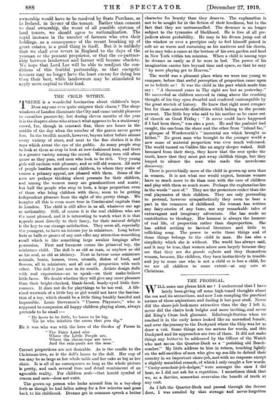 SECURITY FOR THE FARMER. T HE Policy of the Plough has

been vindicated by the Royal Commission on Agriculture in its interim Report. We could have wished that more than a bare majority of the members had recommended the con- tinuance of guaranteed minimum prices for home-grown cereals, but it is none the less important that there was a majority for this fundamental policy without which the agricultural revival must come to naught. The Majority Report puts the case simply and clearly. It is to the interest of the nation that the land should be well cultivated and made to yield a larger proportion of the corn which we need. The war has taught us the danger of relying upon foreign imports for four-fifths of our daily bread. The adverse exchanges since the Armistice have reminded us that we should produce as much of our foodstuffs as we can, so as to lessen the great disparity between what we buy abroad and what we sell to the foreigner—a disparity which is a main cause of high prices. That it is desirable to stop the drain of population from the country to the towns, and if possible to reverse the current, is a proposition which no one would dispute. The farmer himself is not neces- sarily anxious to plough up his land. Stern experience has led him to conclude, rightly or wrongly, that grass pays better than arable, and that there is less risk and far less expense in grazing cattle than in raising crops. But from the national standpoint a country of cattle ranches, with a sparse population in small villages, is not to be compared with a country of well-tilled farms giving healthy employ- ment to a large. population. If we insist on the Policy of the Plough, we must enable the farmer to carry it out. At the very least we must insure him against loss in his efforts to grow more cereals at our bidding. The extent of the change in his methods which we are asking the British farmer to make may be judged from the figures given in the Times the other day by Sir Thomas Middleton. Before the war the farmers of the United Kingdom devoted thirty-six million acres to stock farming and five millions to crops other than those fed to stock. They - received about five pounds from the sale of stock for every pound that they received from the sale of wheat and potatoes. From their point of view grass paid better than arable.

But it was not to the advantage of the community that the proportion of land devoted to cereals should be so small. The war has brought more land under the plough, and it is now essential to prevent the new arable from reverting to pasture. We can only do this by guaranteeing the farmer a fair price for his crops, irrespective of any sudden fall in the price of foreign corn. In return for the guarantee the farmer will be expected to cultivate his land properly. Bad farming will be discouraged, as it should be, and good farming will be rewarded. We confess ourselves unable to understand why the Labour members of the Commission should have opposed guaranteed prices, with little more than a bare negative. They profess much solicitude for the welfare of the farm labourer, and are presumably anxious that there should be a steady and increasing demand for his services. They must, therefore, be in favour of the Policy of the Plough, and opposed to the extension of cattle-grazing, in which far fewer men are needed. Yet, while they wish the farmer to go in for arable rather than grass, they would. refuse him any kind of encouragement, and would leave him free to do as he pleases with his land. They must know very well that the farmer, if left to his own devices, would try to reduce his labour bill by putting his land under grass, and that this would mean the dismissal of many labourers. Nevertheless they reject the only means to the end which they desire. The labourer has now a guaranteed minimum wage, more than twice as high as he earned before the war, and he is, if the Labour Party can secure it, to have an eight-hours day even in the summer, irrespective of the natural laws that govern milking, harvest, and other farm operations. We do not know how the labourer's guaranteed minimum wage is to be paid by a farmer who has not a guaranteed minimum price for his crop, and we suspect that the Labour Party is equally ignorant. High wages for the farm labourer and low prices for home-grown corn are obviously incompatible. If bread must be cheap, it will not be made of British wheat, and in that case the farm labourers with high wages will soon be a dwindling band. Labour cannot eat its cake and have it. The farmer cannot pay wages fixed without regard to the world's competition, and yet sell his crops at prices comparable with those of the crops raised on virgin soil in America or produced by cheap labour in India. The Labour politicians who are guilty of such glaring inconsistencies take a short-sighted view. There is in fact no prospect of cheap food for us or any other country. The minimum prices guaranteed to the farmer for four years at least will probably cost the State nothing. They will give the farmer the sense of security without which he will not expend additional capital on his holding, and they will thus increase tillage and benefit the aericultural popu- lation. Furthermore, the prosperity of 'the villages will react on the towns by creating a new demand for manu- factured goods and for transport. A thriving countryside benefits the townsfolk, as Germany and France found out long ago. The urban population gains more by in- creased profits on trade than it loses on the slightly higher prices of foodstuffs. The clamour for cheap food regardles% of consequences is unreasonable. Sir Thomas Middleton in the letter to which we have referred said that before the war, while an acre devoted to cattle yielded on an average £3 lOs., an acre under wheat or potatoes yielded £9. The largest share of the difference went to the labourer, who spent it on goods from the town. It is foolish for the town to despise and ruin so good a customer, as the Labour Party would have us do.

The Royal Commission has not yet dealt with security of tenure for the farmer. Its delay need not be regretted so much now that Lord Lee has announced his hope of introducing a Bill which will be satisfactory both to landowners and to farmers. The problem is to remedy the hard cases which may, and sometimes do, arise under our present system in England without changing the essential features of that system, which has worked well for generations, and is on the whole more favourable to the farmer than to the landowner. It is a hardship when a farmer who has brought his farm to a high state of cultivation is suddenly and unreasonably given notice to quit. He can of course obtain compensation for improvements, but it may not be adequate. The arbitrary landowner who terminates tenancies in this way is not only harming the individuals, but is also discouraging farmers as a class from doing their very best with their land. There is a general desire in the agricultural com- munity to remedy this grievance, of which we have heard a good deal of late in connexion with the sales of large estates. Landowners, unwisely in our opinion, have thought to improve the auction value of their property by offering the farms with a prospect of early possession. But the question must be handled with care lest security of tenure be transformed into fixity of tenure. Tha last thing that we want in England is dual ownership, which led to such interminable quarrels in Ireland and which has caused no little trouble in Scotland. There is no justification for a demand for fixity of tenure in England, where, contrary to the usual Irish practice, the landowner as a rule has supplied the capital while the farmer has done the work. Fixity of tenure would imply the establishment of Land Courts, and would benefit none but the lawyers. In the end the dual ownership would have to be resolved by State Purchase, as in Ireland, in favour of the tenant. Rather than consent to dual ownership, the worst of all possible systems of land tenure, we should agree to nationalization. The rapid increase in the number of farmers who own their holdings, as a consequence of the recent breaking up of great estates, is a. good thing in itself. But it is unlikely that we shall ever revert in England to the days of the yeoman or the peasant proprietor, or that the co-partner- ship between landowner and farmer will become obsolete. We hope that Lord Lee will be able to readjust the con- ditions of this fruitful partnership, so that energetic farmers may no longer have the least excuse for doing less than their best, while landowners may be stimulated to apply more capital to their land.