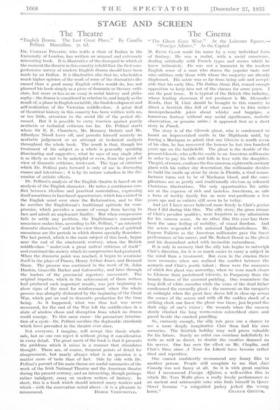 "The Ghost Goes West." At the Leicester Square.'— "Foreign Affaires." At the Capitol

M. RENE. CLAIR made his name by a very individual form of fantasy. He was a realist, with a social conscienee, dealing satirically with French types and scenes which he knew intimately. He' was not a -humorist in • the modern English sense of a than who shares the popular taste mid who satirises only those with whom the majority are already displeased. His satire was so far from being safe and :weep t- able that his early fihnm, The Italian Straw Hal, roused enough opposition to keep him out of the cinema for some years. I use the past tense. It is typical of the British fihn industry, whose leading showman if not producer is Mr. Alexander Korda, that M. Clair should be brought to this country to direct a Scottish film full of what must be to him rather incomprehensible jokes about whisky and bagpipes, a humorous fantasy without any social significance, realistic observation, or genuine satire : it appeared first as a short story in Punch.

The story is of the Glowrie ghost, who is condemned in haunt an impoverished castle in the Highlands until, by forcing a Maclagan to admit that one Glowrie is worth seven of his clan, he has recovered the honour he lost two hundred years ago on the battlefield. The ghost is the double of the present Glowrie, who sells the castle to an American millionaire in order to pay his bills and falls in love with the dough ter. The girl, of course, confuses the free amorous eighteenth-century ghost with his rather shy descendant, the millionaire decides to build the castle up stone by stone in Florida, a rival menu- lecturer turns out to be of Maclagan blood, and the com- plications are as gently and traditionally obvious as coloured Christmas illustrations. The only opportunities for satire are at the .expense of rich and tasteless Americans, as safe a form of weekly family fun as were war-profiteers a few years ago and as cubists still seem to be today.

And yet I have never believed more firmly in Chair's genius than I did during this film.' The silly story, the gross misuse of Chair's peculiar qualities, were forgotten in .my admiration -for his camera sense. In no other film this year has there -been the same feeling of mobility, of visual freedom. And the actors responded with unforced lightheartedness. Mr. Eugene Pallette as the American millionaire gave the finest performance of his career, and Mr.' Robert Donat as -the ghost and his descendant acted with invincible naturalness.

It is only in memory that the silly tale begins to outweigh Chair's direction, for it is so much easier to carry a subject in the mind than a treatment. But even in the cinema there were moments when one realised the conflict between the scenario and Clair's poetic talent ; these were the moments of which this ghost was unworthy, when we were much closer to Elsinore than pasteboard Glowrie, to Purgatory than the brandy flames of the seasonal pudding. One remembers the long drift of white cumulus while the voice of the dead father condemned the cowardly ghost ; the moment on the ramparts at midnight when the great lace sleeve fell in close-up acrois the corner of the screen and with all the sudden shock of a striking clock one knew the ghost was there, just beyond the dark edge of one's vision ; the seconds when. the camera slowly climbed the long worm-eaten • cobwebbed stairs and paced beside the cracked panelling.

So, curiously enough, the silly tale gave one a chance to see a more deeply imaginative Clair than had his own scenarios. The Scottish holiday may well prove valuable for his future, Surely no artist can continue indefinitely to write as well as direct, to double the creative demand on his nerves. One has seen the effect on Mr. • Chaplin, and Chair's films since A Nous La Liberte have become rather tired and repetitive.

One cannot confidently recommend any funny film to another person. People still complain to me that Jazz Comedy was not funny at all. So it is with great caution that I recommend Foreign Affaires, a well-written film in which Mr.'Tom Walls gives a really lovely performance as an ancient and 'aristocratic rake who finds himself in Queer Street because " a misguided jockey 'jerked the wrong