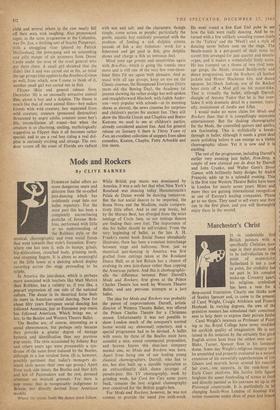 By CLIVE BARNES delusion than the so-called jazz-dancing which has insidiously crept into our ballet repertory. For the most part this has been a completely unconvincing pastiche of Jerome -Rob- bins, performed with little or no understanding of the Robbins style or the musical, choreographic and even social forces that went towards that style's formation. Every- where one has seen it, with its bumps, grinds, hip-dislocations, crouched body, grinning teeth, and snapping fingers. It is about as meaningful as the little lasses at a dancing school display cavorting across the stage pretending to be sylphs.

In America. the jazz-dance, which is perhaps more associated with teachers like Matt Mattox than Robbins, has a validity as, if you like, a pop-art 'expression of one side of the national culture. The dance in its theatrical form finds its roots in American social dancing. Now for about fifty years European social dancing has followed American, just as European pop music has followed American. Which brings me, at last, to the Beatles and Western Theatre Ballet.

The Beatles are, of course, interesting as a social phenomenon, but perhaps only because they provoke a greater degree of teenage hysteria and identification than any previous pop music. The riots occasioned by Johnny Ray and others years ago were presumably a syn- drome of the same fever induced by the Beatles, although in a less virulent form. (It is, however, possibly pertinent that today's teenagers de- mand idols nearer their own -age group.) Apart from such side issues, the Beatles and their kith and kin of Pacemakers and the rest, demand attention on musical grounds. , For here is pop music that is recognisably indigenous to Britain, not directly derived from American models.

Where the music leads the dance must follow. While British pop music was dominated by America, it was a safe bet that what New York's Roseland was dancing today Hammersmith's Palais de Danse would be dancing tomorrow. But the last social dances to be imported, the Bossa Nova and the Madison, made compara- tively little effect. And as our pop music, led by the Mersey Beat, has diverged from the strict tutelage of Uncle Sam, so our teenage dances are finding their own feet. The importance of this for ballet should be self-evident. From the very beginning of ballet, as the late A. H. Franks's recent book Social Dance abundantly illustrates, there has been a constant interchange between' stage and ballroom. Now, just as theatrical jazz-dancing in America was first grafted from cuttings taken at the Roseland Dance Hall, so at last Britain has a chance of evolving its own jazz-dance rather than copying the American pattern. And this is choreographic- ally the difference between Peter Darrell's Mods and Rockers, first given at the Prince Charles Theatre last week by Western Theatre Ballet, and any previous attempts at a jazz ballet.

The idea for Mods and Rockers was probably the purest of improvisations. Darrell, artistic director of Western Theatre Ballet, was offered the Prince Charles Theatre for a Christmas season. Unfortunately it was not possible to show London much of the company's normal (some would say abnormal) repertory, and a special programme had to be devised. A ballet with music by three of the Beatles must have sounded a nice, sound commercial proposition, and heaven knows this shoe-lace company needed one, so Mods and Rockers was born. Apart from being one of our leading young classical choreographers, Darrell, who has to eat, has also built up a sizeable reputation as an extraordinarily slick dance arranger of pseudo-jazz. His TV choreography, week by grinding week, for Cool for Cats some years back, remains the best original choreography ever conceived for the British goggle-box.

For Mods and Rockers, however, he was not content to provide the usual jive mish-mash.

He went round a few East End pubs to see how the kids were really dancing. And he re- turned with a few unlikely sounding names (such, as the 'Turkey' and the 'Mash') and a style of dancing never before seen on the stage. They Beatle-music is a pot-pourri of their more in-' sistent hits arranged for jazz quartet and mouth-, organ, and it makes a wonderfully lively score. He has trumped up a theme of two rival teen- age gangs, the Mods, dressed Beatle-style and dance progressives, and the Rockers, all leather jackets and Honor 'Blackman kits, and dance squares. Jet/Shark fashion, one of the Rocker boys carts off a Mod girl on his motor-bike. That is virtually the ballet, although Darrell, disciple of Antony Tudor that he is, has over- laden it with dramatic detail in a manner, typic- ally, reminiscent of Jardin aux Liras.

I would make no more claim for Mods and Rockers than that it is compellingly enjoyable entertainment. But the shaking choreography for the Mods, the controlled quivers and quirks, are fascinating. This is stylistically a break- through in ballet, although it needs a great deal more polishing before it can emerge as a viable choreographic idiom. Yet it is new and it is exciting.

The rest of the programme, including Darrell's earlier very amusing jazz ballet, Non-Stop, a couple of new classical pas de deux by Darre and John Cranko, and Walter Gore's Stree Games, with brilliantly fuzzy designs by Andra Francois, adds up to a splendid evening. This is the first time Western Theatre Ballet have been in London for nearly seven years. More and more they are gaining international recognition as one of Europe's leading companies. Please go to see them. They need to sell every seat they can in the first place, and you will thoroughly enjoy them in the second.