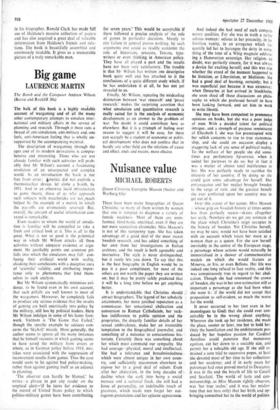 The Bomb and the Computer Andrew Wilson (Barrie and Rockliff 30s) The bulk of this book is a highly readable account of wargaming and of all the many other contemporary attempts to simulate inter- national and military affairs in the service of planning and research. Through it there runs a thread of anti-simulation, anti-military and, one feels, anti-American feeling that is wholly un- supported by the accompanying material.

The description of wargaming through the ages and of its modern derivations is compre- hensive and interesting. Those who are not already familiar with such activities will prob- ably find Mr Wilson's account a fascinating revelation of an unsuspected and complex world. As an introduction the book is not free from error: 4merica did not explode a thermonuclear device, let alone a bomb, by 1951. And in an otherwise lucid introduction to game theory, those of us who approach such subjects with matchsticks are notonuch helped by the example of a matrix in which the pay-offs are erroneously reversed. But, overall, the amount of useful information con- veyed is remarkable.

Even readers to whom the world of simula- tion is familiar will be compelled to take a fresh and critical look at it. This is all to the good. What is not so good is the polemical way in which Mr Wilson attacks all these activities without adequate evidence or argu- ment. He justifiably points out common pit- falls into which the simulators may fall : con- fusing their artificial world with reality, cloaking their conclusions with a deceptive aura of 'scientific' validity, and attributing impor- tance only to phenomena that lend them- selves to such analysis.

But Mr Wilson systematically minimises evi- dence, to be found even in his own account, that such pitfalls are well known to most of the wargamers. Moreover, he completely fails to produce any serious evidence that the results of gaming are built uncritically into policy by the military, still less by political leaders. Here Mr Wilson indulges in some of his faster foot- work. Vietnam is The Game that Failed,' though the specific example he adduces con- cerns the `Skybole missile. More generally, the author seems to ignore all the many instances that he himself recounts in which gaming seems to have saved the military from errors or where, as in German policy before 1914, mis- takes were associated with the suppression of inconvenient results from games. Thus the case would seem to be against bad policy-making, rather than against gaming itself as an adjunct to planning.

`The observer can hardly be blamed,' he writes—a phrase to put any reader on the sceptical alert-1f he turns for evidence to the record of United States policy to which politico-military games have been contributing for seven years.' This would be acceptable if there followed a precise analysis of the role of games in particular decisions. Merely to cite failure in general proves nothing; by such arguments one could as readily condemn the role of historians, senators, Texans, type- writers or even thinking in American policy.

They have all played a part and the results have not been very satisfactory. The trouble

is that Mr Wilson has written one descriptive book quite well and has attached to it the conclusions of a quite different study which, if he has undertaken it at all, he has not yet revealed to us.

Finally. Mr Wilson, repeating the misleading distinction between 'war research' and 'peace research,' makes the surprising assertion that -what simulation and quantitative research is really suited for is the analysis of economic development as an answer to the problem -of war. No doubt it could contribute here as elsewhere. But it is a triumph of feeling over reason to suggest it will be easy, for there can scarcely be a student of economic or politi- cal development who does not confess that in hardly any other field are the relations of cause and effect, ends and means, more elusive.