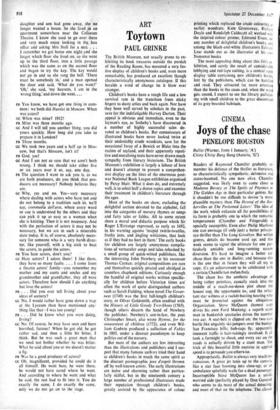 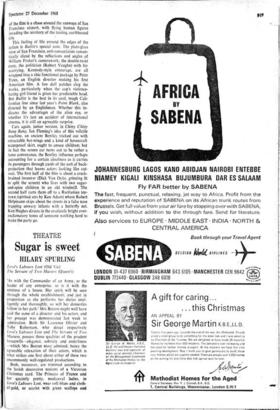 Joys of the chase

Readers of Raymond' Chandler probably re- member his defence of the thriller as literature, so characteristically sympathetic, defensive and status-haunted. No one now alive, Chandler suggested, was likely even to come close to Madame Bovary or The Spoils of Poynton or The Golden Age in their particular genres. But it shouldn't be too difficult to devise "a more plausible mystery than The Hound of the Bas- kervilles or The Purloined Letter.' The. idea of the work which exhausts all the possibilities of its form is probably one to which the romantic temperament (Chandler and Fitzgerald) is specially susceptible. Even after Philip Marlowe one can envisage (if only just) a better private- eye thriller than The Long Goodbye. But within genres, details do become used up; and this week seems to signal the ultimate for one par- ticularly amiable and long-running screen diversion. It's hard to imagine a better car chase than the one in Bullitt; and because this is the one that in future they will all try to copy, it's an achievement to be celebrated with a certain Chandlerian melancholy.

The chase has the aesthetic advantage of being rather pointless, casually stuck into the middle of a reach-me-down plot about the honest cop, the opportunist DA, and the reluc- tant star witness at a racket-busting hearing who must be protected against the ubiquitous Organisation. Steve McQueen (honest cop) drives his own Ford Mustang; a superb stunt man in bankerish spectacles drives the number two car. A seat-belt is clipped on; the two cars hurtle like ungainly ski-jumpers over the bumpy San Francisco hills; hub-caps fly; apparently innocent traffic is hair-raisingly involved. It all took a fortnight to shoot, and every car on the roads is actually driven by a stunt man. The trick of this beautiful little exercise in applied speed is to persuade you otherwise.

Appropriately, Bullitt is always very machine. conscious. A great jet taxis up to the camera, like a star face looming into close-up; or a0 ambulance spitefully waits for a dead passenger. Incorruptible Steve McQueen has a small/ worried aide (perfectly played by Don Gordon/ who seems to do most of the actual detecting and most of that on the telephone. The climas of the film is a chase around the runways of San Francisco airport, with flying human figures invading the territory of the taxiing, earthbound jets. This feeling of life around the edges of the action is BuIlitt's special note. The plate-glass view of San Francisco, anti-romanticism roman- tically sliced by the reflections and angles of William Fraker's camerawork, the double-twist story, the politician (Robert Vaughn) with his scurrying, Kennedy-style entourage, are all wrapped into a chic functional package by Peter Yates, an English director making his first American film. A few dull patches clog the works, particularly when the cop's violence- hating girl friend is given her predictable head. But Mitt is the best in its cool, tough Cali- fornian line since last year's Point Blank, also directed by an Englishman. Whether this in- dicates the advantages of the alien eye, or whether it's just an accident of international cinema, it is still an agreeable surprise.

Cars again, junior version, in Chitty Chitty Bang Bang. Ian Fleming's idea of this volatile machine, an ancient Bentley tricked out with retractable bat-wings and a kind of hovercraft waterproof skirt, ought to amuse children; but in fact the screen car turns out to be rather a tame conveyance, the Bentley influence perhaps accounting for a certain aloofness as it carries its passengers through yards of the sort of back- projection that leaves actors looking like cut- outs. The first half of the film is about a crack- brained inventor (Dick Van Dyke, grinning fit to split the screen) who lives with two sugar- and-spice children in an old windmill. The second half carts them off to a Ruritanian toy- town (spirited sets by Ken Adam) where Robert Helpmann skips about the streets in a false nose trapping unwary infants with a butterfly net. Ken Hughes directs in the resolutely bright over- exclamatory tones of someone working hard to make the party go.