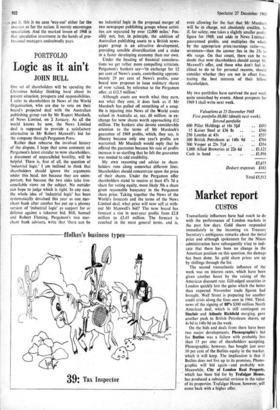 Transatlantic influences have had much to do with the performance of London markets in the past few days. Gold shares responded immediately to the incoming us Treasury Secretary's ambiguous remarks about the metal price and although spokesmen for the Nixon administration have subsequently tried to indi- cate that there has been no change in the American position on this question, the damage has been done. So gold share prices are up by shillings through the list.

The second transatlantic influence of the week was on interest- rates, which have been given another boost by the raising of the American discount rate. Gilt-edged securities in London quickly lost the gains which the better than expected November trade figures had brought. Wall Street is preparing for another credit crisis along the lines seen in 1966. Third, news of the signing of BP's $300 million North American deal, which is still contingent on Sinclair and Atlantic Richfield merging, gave another push to British Petroleum shares, up 4s 9d to 140s 9d on the week.

On the bids and deals front there have been two major developments. Phonographic's bid for Butlins was a failure with probably less than 15 per cent of shareholders accepting. Phonographic, however, has bought just over 10 per cent of the Butlins equity in the market. which it will keep. The implication is that if Butlins does not live up to its promises, Phono- graphic will bid again—and probably win. Meanwhile, City of London Real Property, which has been bid for by Trafalgar House, has produced a substantial revision in the value of its properties. Trafalgar House, however, will come back with a higher offer.