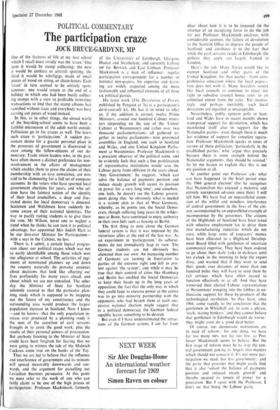 One of the features of life at my first school which I recall most vividly was the 'craze.' One term it would be stamp collecting; the next it would be conkers or aircraft spotting; the third it would be whirligigs, made of small pieces of wood on string, or chain-letters. Each

'craze' in turn seemed to- be entirely spon- taneous: one would return at the end of a

holiday in which one had been busily collect- ing stamps with a view to profitable term-time transactions to find that the stamp albums had vanished without trace and everybody was busy carving out pieces of wood instead.

In this, as in other things, the closed world of the boarding-school seems to have been a faithful microcosm of the adult world outside. Politicians go in for crazes as well. The latest such craze is 'participation.' A sudden pas- sionate desire for a greater personal place in the processes of government is discovered to exist among the fellow-citizens of our de- mocracy. Trade union leaders who, in the past, have often shown a distinct preference for non- involvement in the affairs of management which enables them to press the claims of their membership with an easy conscience, are now said to be clamouring for a full set of company accounts. In the voters who have spurned local government elections for years,' and who sel- dom have the faintest notion of the identity of their local councillors, a deep and frus- trated desire for local democracy is detected.

Scotsmen and Welshmen have suddenly be- come aware of their national identities. The way to pacify rioting students is to give them the vote. Mr Wilson, never one to neglect a trend when he thinks he can turn it to political advantage, has appointed Mrs Judith Hart to be our first-ever Minister for Participation— with a seat in the Cabinet, no less.

There is, I admit, a certain logical progres- sion about our political crazes which was not so easily identifiable among those which won our allegiance at school. The activities of regi- ments of nominated planners up and down the country naturally do provoke anxieties about decisions that look like affecting our lives profoundly for many years ahead, and about which we are not consulted. The other day the Minister of State for Scotland solemnly assured us that the particular plan- ning study which is supposed to be mapping out the future of my constituency and the surrounding area would produce the largest population increase in Scotland. Now I know —and he knows—that the only population in- crease ever produced by a planning study is the sum of the accretion of civil servants brought in to assist the good work, plus the results of their personal powers of procreation. But anybody listening to the Minister of State could have been forgiven for fearing that we were going to witness the tale of the Midwich Cuckoos come true on the banks of the Tay.

Thus we are led to believe that the influence and interference of government and its minions will spread inexorably downwards and out- wards, and the argument for parcelling out Leviathan becomes persuasive. At this point we must refer to the work of one who can fairly claim to be one of the high priests of participation: Professor Mackintosh, formerly of the Universities of Edinburgh, Glasgow, Ibadan and Strathclyde, and currently Labour

Mackintosh is a man of influence: regular participation correspondent for a number of

national newspapers, his expertise and learn- ing are widely respected among the more fashionable and influential elements of all three UK political parties.

His latest work (The Devolution of Power, published by Penguin at 5s) is a participator's do-it-yourself kit. He has it in mind to offer us, if my addition is correct, twelve Prime Ministers, around one hundred Cabinet minis- ters (depending on the size of the 'Union' -Cabinet at Westminster) and rather over two thousand parliamentarians; all gathered to- gether in twelve parliaments—nine provincial assemblies in England, one each in Scotland and Wales, and one United Kingdom Parlia- ment at Westminster. Professor Mackintosh is a prescient observer of the political scene, and he evidently feels that such a fine proliferation of representative institutions would save the Labour party from oblivion in the years ahead. 'Any Government,' he suggests, 'which can solve the balance of payments position and induce steady growth will secure its position in power for a very long time'; and somehow, one feels, he doesn't see the Labour govern- ment doing that. So obviously what is needed is a system akin to that of West Germany, whereby, as he points out, the Social Demo- crats, though suffering long years in the wilder- ness at Bonn, have continued to enjoy authority in their own fiefs such as Saxony or Berlin.

The first thing to note about the German federal system is that it was imposed by the victorious allies at the end of the last war. As an experiment in 'participation,' its achieve- ments do not immediately leap to view. The German students are not obviously less alienated than our own. An increasing number of Germans are turning in frustration to parties of the extreme right and left in pro- test against 'the system'; and while it may be true that their control of cities like Hamburg and Berlin has enabled the Social Democrats to keep their heads up in the long years of opposition, the fact that the only way in which they could hope to exercise power at the centre was to go into minority partnership with the opponents who had beaten them at each suc- cessive national election might suggest that as a political democracy the German federal republic leaves something to be desired.

But even if I have underestimated the attrac- tions of the German system, I am far from clear about how it is to be imposed (in the absence of an occupying force to do the job for us). Professor Mackintosh analyses, with considerable acumen, the failure of devolution to the Scottish Office to impress the people of Scotland, and attributes it to the fact that

while the civil servants reside in Edinburgh, the policies they apply are largely framed in London.

Here's the rub. Many Tories would like to exempt Scotland--and other parts of the

United Kingdom. for that matter—from com-

prehensive education where the local popula- tion does not wish it. Many Socialists would

like local councils to continue to enjoy the right to subsidise council house rents to an unlimited extent from the rates. Yet increas- ingly, and perhaps inevitably, such local deviations are regarded as unacceptable.

widespread support for devolution, which has

manifested itself also in support for the Nationalist parties—even though there is much less evidence of support for complete separa- tion. Professor Mackintosh speaks in tones of sorrow of those politicians, 'particularly in the established parties,' who 'argue that precisely because there is some strength behind the Nationalist arguments, they should be resisted.' So let me hasten to explain that this is not my position at all.

At another point our Professor asks what can have happened 'in the brief period since the 1966 general election' (for he recognises that Nationalism has enjoyed a meteoric and entirely unexpected advance since then). I will tell him. We have had an unparalleled exten- sion of the wilful and mindless interference of central government in the lives of the citi- zen, accompanied by an unparalleled example of incompetence by the governors. The citizens of the Highlands of Scotland have been taxed with selective employment tax to drive them into manufacturing industries which do not exist, while large sums of taxpayers' money have been allocated to a Highland Develop- ment Board filled with gentlemen of uncertain commercial expertise. They have been ordered to go about their daily tasks in darkness until ten o'clock in the morning to help the export drive, and warned that if they want to send their goods over distances of more than one hundred miles they will have to send them by rail services which have often ceased to function effectively or at all. And they have witnessed their elected Labour representatives at Westminster trooping into the lobbies in en- thusiastic support for these by-products of the technological revolution. So they have, since 1966. come rapidly to the conclusion that the gentlemen in Whitehall are, to coin a phrase, 'stark, staring honkers,' and they cannot believe that gentlemen in Edinburgh would do worse: they might even do a good deai, better.

Of course, our democratic institutions are in need of reform: for one thing, we have far too many MPS, not far too few, as Pro- fessor Mackintosh seems to believe. But the first stage of reform must be to stop the cen- tral government poking its fingers into matters which should not concern it. It's not more par- ticipation we need, but less government: and the party that provides that might easily find that it also 'solved the bafance of payments position and induced steady growth' and thereby secured its tenure of power for a generation. But I agree with the Professor, I don't see that being the Labour party.