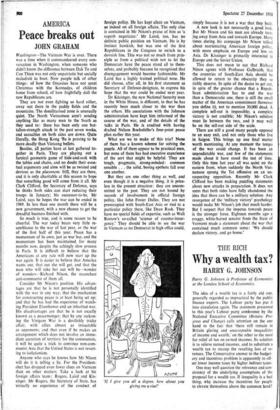 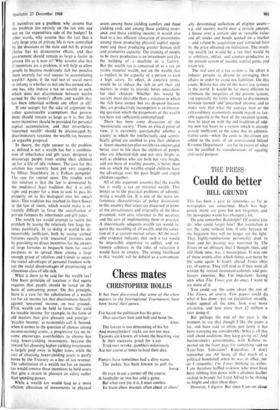 Why a wealth tax?

The idea of a wealth tax is a fairly old one, generally regarded as impractical by the public finance experts. The Labour party has put it into circulation again. The statement presented to this year's Labour party conference by the National Executive Committee .(Britain: Pro- gress and Change) calls attention on the one hand to the fact that 'there still remain in -Britain glaring and unacceptable inequalities of income and wealth,' on the other to the need for relief of tax on earned incomes. Its solution is to relieve earned incomes, and to substitute a wealth tax to recoup the resulting loss of re- venues. The Conservative answer to the budget- ary and incentives problem is apparently to off- set lower income taxes by higher indirect taxes.

One may well question the relevance and con- sistency of the underlying assumptions of the proposal for a wealth tax. If inequality is a bad thing, why increase the incentives for people to elevate themselves above the common herd?

If incentives are a problem, why assume that the problem lies entirely on the tax side and not on the expenditure side of the budget? In other words, why assume that the fact that a very large area of private life is now controlled by the decisions of the state and not by private choice has no disincentive effects, and that government should remain as large a factor in private life as it now is? Why assume also that if incentives are a problem, it will help to allow people to become moderately rich but penalise them severely for real success in accumulating wealth? Again, if the real test of social merit or infamy is whether or not one has earned what one has, why impose a tax on wealth as such, which does not discriminate between wealth earned by the owner's efforts and wealth that has been inherited without any effort at all?

If one accepts for the sake of argument the rather questionable assumptions that govern- ment should remain as large as it is, but that more incentives should be provided for personal capital accumulation, and that nevertheless `unearned wealth' should be discouraged by discriminatory taxation the wealth tax becomes an arguable proposal. "

In theory, the right answer to the problem so defined is not a wealth tax but a combina- tion of inheritance and gift taxes, designed to discourage people from setting their children up for a life of idle richness. The case for this solution has recently been put very cogently by Oliver Stutchbury in a Fabian pamphlet, The case for capital taxes. The trouble with this solution is that the law is dominated by the mediaeval legal tradition that it is only right and proper for a man to seek to pass his property on to his biological (not his social) heirs. This tradition has reached its finest flower in the law of trusts, which would make it ex- tremely difficult to force the socialisation of private fortunes by inheritance and gift taxes.

The wealth tax would attempt to tackle this problem by taxing the relatively few large for- tunes punitively. In so doing it would be de- monstrably inefficient, both by taxing 'earned' fortunes equally with 'unearned' fortunes, and by providing no direct incentives for the owners of large fortunes to bequeath them for social purposes or to spread them among a large enough group of relatives and friends to secure the social advantages of personal freedom with- out the social disadvantages of perpetuating an obnoxious class of idle rich.

What is there to be said for the wealth tax? One basic principle of taxation is that equity requires that people should be taxed on the basis of consuming power. On this principle, there is a case for the substitution of a wealth tax for an income tax that discriminates heavily against 'unearned' income, on two grounds. First, wealth can be held in forms that yield no taxable income, for example, in the form of old masters that give pleasure and prestige— `psychic income,' as economists call it. Second, when it comes to the question of choices among income-earning assets, a progressive tax on in- come encourages asset-holders to choose less risky lower-yielding investments, because the reward for choosing higher-yielding investments is largely paid away in higher taxes, while the cost of choosing lower-yielding assets is partly borne by the Treasury as a loss of tax revenue. The substitution of a wealth tax for an income tax would remove these incentives to hold assets that give a return in pleasure or safety rather than spending power.

While a wealth tax would lead to a more efficient allocation of investments in physical assets among those yielding comfort and those yielding cash, and among those yielding insur- ance and those yielding income, it would also lead to a less efficient allocation of investments among those producing physical capital equip- ment and those producing greater human skill and productive capacity. The training of people to be more productive is an investment just like the building of a machine or a factory. But the wealth tax is conceived of as a tax on visible material wealth, not on the wealth that is implicit in the capacity of a person to earn a high salary. Its effect, in concrete terms, would be to induce the rich to sell their old masters in order to provide better educations for their children. Whether this would be socially more desirable than a situation in which the rich have money but are despised because they are productively incompetent is an interest- ing question which the proponents of the wealth tax have not sufficiently contemplated.

There has been some discussion of the `meritocratic society.' From an ethical point of view, it is extremely questionable whether a society in which the intellectually and scienti- fically gifted are enabled to give their children a lower-income-tax-plus-wealth-tax-encouraged better start in life than the children of people who are inherited-rich and not very bright as well as children who are both not very bright, and not born of wealthy parents, is better than one in which the wealthy-stupid children have the advantage over the poor bright and stupid children together.

All of this argument assumes that the wealth tax is really a tax on material wealth. This brings us to the practical problems of adminis- tering a wealth tax. It is one of the more un- fortunate characteristics of policy discussions in this country that issues are discussed in terms of the attractiveness and originality of the ideas presented, with zero reference to the accuracy and the cost of implementing them in practice. A theoretically adequate wealth tax would re- quire the recording of all wealth, and the valua- tion of it at current market values. All the avail- able evidence indicates that such a tax would be impossibly expensive to collect, and ex- tremely arbitrary in the rules of valuation it would have to employ. The strong likelihood is that 'wealth' will be defined as a convention-

ally determined collection of eligible assets- e.g. old masters worth over a certain amount, a house over a certain size or rateable value, and all stocks and bonds quoted on a market —and valued by acquisition cost corrected later by the price obtained on realisation. The result- ing wealth tax would be a tax that would be as arbitrary, unfair, and counter-productive as the present system of income, capital gains, and estate tax.

The real cost of a tax system is the effort it induces persons to devote to arranging their affairs in order to avoid tax liabilities. On this count, Britain has one of the worst tax systems in the world. It would be far more efficient to eliminate the inequities of the present system, and especially the futile attempt to discriminate between `earned' and 'unearned' income, and to make sure that what the average man or the extraordinary economists would regard as tax- able capacity is the base of the taxation system, than to keep on with the old tradition of add- ing new tax bases to a system which is already grossly inefficient, in the sense that its adminis- trative costs—when the costs to the citizen are added to the costs of an overstrained Inland Revenue Department– are far in excess of what can be justified by considerations of equality and social purpose.