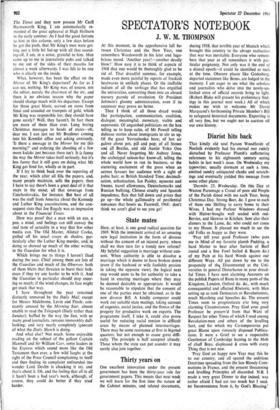 At this moment, in the apprehensive lull be- tween Christmas and the New Year, one remembers Wordsworth in his later and lugu- brious mood. 'Another year!—another deadly blow!' How easy it is to think of aspects of 1968 that one would be thoroughly glad to be rid of. That dreadful summer, for example, made even more painful by reports of freakish heatwaves in unlikely places. Or the ineffable tedium of all the verbiage that has engulfed the universities, converting them into an absurd nursery parody of revolution. Or President Johnson's gloomy administration, even if its successor may prove no better.

Then I think of all those dread words like participation, communication, coalition, dialogue, meaningful, monetary, viable and supersonic. Of anguished politicians on the box telling us to keep calm, of Mr Powell telling dubious stories about immigrants to stir us up. Of the great Yevtushenko bore; of hot air galore about pot, pill and pop; of all Stones and all Beatles, and old Auntie Yoko Ono and all. Never forgetting Mr Aubrey Jones, the archetypal saloon-bar know-all, telling the whole world how to run its business; or the stuttering excitement •of the press when an actress favours her audience with a sight of pubic hair; or British Standard Time, decimali- sation, urbanisation, Ian Paisley, squeezes and freezes, travel allowances, Deutschemarks and Russian bullying, Chinese cruelty and Spanish impudence, flats that fall down and prices that go up—the whole gallimaufry of pestilential nuisances that besets us. Farewell, 1968: don't think we aren't glad to see you go!

Here, at least, is one good radical question for 1969. With the imminent arrival of an amusing new legal institution in the form of divorce without the consent of an injured party, where shall we then turn for a trendy new reform? My helpful suggestion is marriage without con- sent. When authority is able to dissolve a marriage which it deems to have broken down (even if the husband or wife foolishly persists in taking the opposite view), the logical next step would seem to be for authority to take a hand in creating marriages where they may be deemed desirable or appropriate. It would be reasonable to stipulate that the consent of one of the parties must be obtained, as in the new divorce Bill. A kindly computer could work out suitable state matings, taking account of eugenics, social justice, and the fitness of the progeny for productive work on exports. The programme itself, I take it, could also prove useful for reducing racial tension in difficult areas by means of planned intermarriages. There may be some resistance at first in bigoted quarters, but not enough to cause great diffi- culty. The principle is half accepted already. Those whom the state can put asunder it may surely also join together.

One excellent innovation under the present government has been the thirty-year rule for government papers. This means that next week we will learn for the first time the nature of the Cabinet minutes, and related documents, during 1938, that terrible year of Munich which brought this country to the abrupt realisation that war was inevitable, Everyone who remem- bers that year at all remembers it with par- ticular poignancy. Not only was it the end of a -dismal epoch—it could be identified as such at the time. Obscure places like Godesberg, departed statesmen like Benes, are lodged in the memory. I am eager to see what the scholars and journalists who delve into the newly-un- locked store of official records bring to light. (Robert Blake will present his preliminary find- ings in this journal next week.) All of which makes me wish to welcome Mr David Marquand's forthcoming Private Member's Bill to safeguard historical documents. Exporting is all very fine, but we ought not to auction off our own history.-

That kindly old soul Parson Woodforde of Norfolk evidently had his eternal rest rudely disturbed by Professor Plumb's unflattering references to his eighteenth century eating habits in last week's issue. On Wednesday my typewriter, usually dormant at such a time, emitted sundry antiquated clanks and scratch- ings and eventually yielded this message from some other plane: Decmbr. 25, Wednesday. On this Day at Weston Parsonage a Croud of poor old People of the Parish dined with me each Year, being Christmas Day. Strong Beer, &c. I gave to each of them one Shilling to carry home to their Wives. I had my Parlour Windows dressed with Hulver-boughs well seeded with red- Berries, and likewise in Kitchen. Sent also their dinners to the Lame, &c. who could not come to my House. It pleased me much to see the old Folks so happy as they were.

'Pray tell your good Professor (who puts me in Mind of my favorite plumb Pudding, a hard Matter to beat after Surloin of Beef rosted and a fine Fowl boiled & Bacon &c.) of my Pain at his hard Words against our different Ways. All put down by me to the propensity of the Discontented at the Uni- versities to general Disturbance M your dread- ful Times. I have seen alarming Accounts on the publick Papers of Riots in many parts of the Kingdom, London, Oxford &c. &c., with much consequential and affected Rhetoric, with Men setting up as rank Democrats or Revolutionists, much Marching and Speeches &c. The present Times seem to prognosticate e'er long very alarming Circumstances. Pray God your good Professor be preserv'd from that Want of Respect for other Times of which I read among Revolution-men and others of the levelling Sort, and for which my Co-temporaries put great Blame upon riotously disposed Publica- tions. It were a Grief to see a respectable Gentleman of Cambridge leaning to the Mob of chuff Boys, displeased & cross with every Thing that is not new.

'Pray God an happy new Year may this be to our country, and all spared the seditious Doctrines spreading from the late Bloody Com- motions in France, and the present threatening and levelling Principles all discarded. N.B. I made a very great Dinner to day indeed, was rather afraid I had eat too much but I recd. no Inconvenience from it, by God's .Blessing.'