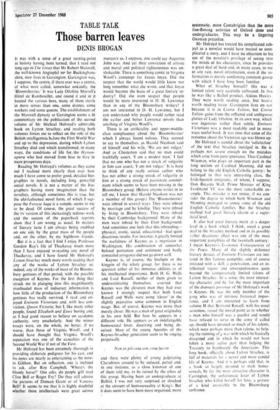 It was with a sense of a great turning-point in history having been turned, that I read not

tong ago in The Times that Mr Robert Maxwell, the well-known Anglophil MP for Buckingham- shire, now lives in Garsington. Garsington was,

I suppose, the centre, if there ever was a centre, of what were called, somewhat unkindly, the `Bloomsberries.' It was Lady Ottoline Morrell's Hotel de Rambouillet, and round it and in it.

buzzed the various bees, many of them sterile in more senses than one, some drones, some workers and some queens. The establishment of the Maxwell dynasty at Garsington 'seems a fit commentary on the publication: of the second volume of Mr Michael Holroyd's admirable book on Lytton Strachey; and reading both volumes forces me to reflect on the role of the British intelligentsia bdore the First World War and up to the depression, during which Lytton Strachey died and which transformed, in many

ways, the conditions of life for, the Hymen- optera who had moved from hive to hive in more prosperous days.

much I have come to prefer good, detailed bio- graphies to novels, including long, powerful social novels. It is not a matter of the bio- graphers having more imagination than the novelists, although sometimes this is true, but the old-fashioned novel form, of which I sup- pose the Forsyte Saga is a sample, seems to me to be dead. Of course, the great success of the TV version of this increasingly tedious work and the success of the paperback reprints show that I am wrong as usual. In matters of literary taste I am always being' snubbed on one side by the great mass of the people and, on the other, by my highbrow friends.

But it is a fact that I find 1 enjoy ProfesSor Gordon Ray's life of Thackeray much more than I have enjoyed re-reading any novel of Thackeray, and I have found Mr Holroyd's Lytton Strachey much more worth reading than any of the works of Lytton Strachey or, indeed, any of the works of most of the Blooms- bury geniuses of that period, with the possible exception of Keynes. For the first thing that struck me in plunging into this magnificently overloaded mass of indiscreet information is how little of the production of the Bloomsbury geniuses has really survived. I read and en- joyed Eminent Victorians and, with less con- viction, Queen Victoria; but I, like many other people, found Elizabeth and Essex boring and, as I had good reason to believe on academic authority, very unscholarly. And the minor essays were, on the whole, no better, if no worse, than those of Virginia Woolf, and I should have thought that Virginia Woolf's reputation was one of the casualties of the Second World War if not of the First.

Mr Holroyd has been extremely thorough in providing elaborate pedigrees for, his cast, and his notes are nearly as entertaining as the notes in Gibbon. But on reflection, one is inclined to ask, after Roy Campbell, 'Where's the bloody horse?' One asks, do people Still read Clive Bell or-Roger Fry? Do they still admire the pictures of Duncan Grant or of Vanessa Bell? It seems to me that it is highly doubtful whether these intellectuals were great talents manques as, 1 suppose, one could say Augustus John was. And yet their conviction of artistic and moral and political righteousness was un- shakeable. There is something comic in Virginia Woolf's contempt for James Joyce. Did she suspect that the world would little know nor long remember what she wrote, and that Joyce would become the basis of a great literary in- dustry? Did she even suspect that people would be more interested in D. H. Lawrence than in any of the Bloomsbury writers? I am not interested in D. H. Lawrence, but I can understand why people would rather read the earlier and better Lawrence novels than anything of Virginia Woolf's.

There is an artificiality and upper-middle- class complacency about the 'Bloomsberries' which I always found tedious. They seemed to say to themselves, as Harold Nicolson said of himself and his wife, 'We are not vulgar.' And as Chesterton said that no man could truthfully assert, 'I am a modest man,' I feel that no one who has not a streak of vulgarity in him can assert, 'I am not vulgar.' It is hard to think of any really serious author who has not either a strong streak of vulgarity in him or a strong streak of passionate commit- ment which seems to have been missing in the Bloomsbury group. (Before anyone writes in to tell me, I know that Harold Nicolson was not a member of this group.) The `Bloomsberries' were inbred in several ways. They were inbred by marriage and by kinship. They were inbred by - living in Bloomsbury. They were inbred by their Cambridge background. Many of the men were inbred by their Eton background. And sometimes one feels that this inbreeding — physical, erotic, social, educational—had quite disastrous results. For instance, it greatly limited the usefulness of Keynes as a negotiator in Washington. His combination of somewhat belated patriotism and sentiment and badly concealed arrogance did not go down well.

Keynes is, of course, the linchpin or the kingpin of the whole group, for there is no question either of his immense abilities or of his intellectual importance. Both H. G. Wells and Lord Russell, neither of them given to underestimating themselves, asserted that Keynes was the cleverest man they had ever known. I strongly suspect that both Lord Russell and Wells were using 'clever' in the slightly pejorative sense common in English usage. But, of course, Keynes was more than merely clever. He was a man of great originality in his own field. But here he appears in a different role. He appears as an indefatigable homosexual lover, deceiving and being de- ceived. Most of the young Apostles of the Keynes-Strachey generation seem to be singing perpetually

Non so pia cosa son, cosa faccio and there were plenty of young palpitating Cherubinos around to be seduced, petted and, in one instance, as a close kinsman of one of them told me, to be ruined by the ethos of this group. Having been an undergraduate at Balliol, I was not very surprised or shocked at the amount of homosexuality at King's. But it does seem to have been more organised, more systematic, more Cantabrigian than the more free-flowing activities of Oxford dons and undergraduates. This may be a lingering Oxonian prejudice.

Mr Holroyd has treated his complicated sub- ject as a novelist would have treated so com- plicated a story, and I have no objection to his

use of the novelist's privilege of seeing into the minds of his characters, since he provides a great deal of hard and, in many cases, to me at any rate, novel information, even if the In- formation is merely confirming common gossip with which I have long been familiar.

What of Strachey himself? His was a limited talent very carefully cultivated. In this he was like a Balliol product, Aldous Huxley.

because it is in Crome Yellow, but Crome Yellow gains from the reflected and ambiguous glories of Lady Ottoline. In its own way, which was ingenious rather than subtle, Eminent Victorians was a most readable and in many ways useful book. It was time that some of the

nonsense about the Victorian age was blown up.

Mr Holroyd is candid about the 'solicitation' of the text that Strachey indulged in. He is perhaps not severe enough on the mistakes

which arise from pure ignorance. Thus Cardinal Wiseman, who plays an important part in the long section on Cardinal Manning, did not belong to the old English Catholic gentry: he belonged to that very interesting class, the Irish-Spanish emigrants, of whom, I suppose, Dcin Ricardo Wall, Prime Minister of King Ferdinand VI. was the most remarkable ek- ample. This mistake is not minor, if we con- sider the degree to which both Wiseman and Manning managed to annoy some of the old English Catholic families. But the Strachey method had great literary charm at a super- ficial level.

It also had great literary merit at a deeper level in a book which. I think, owed a good deal to the Strachey method and in its possibly rather disastrous effect was one of the most important pamphlets of the twentieth century: I mean Keynes's Economic Consequences of the Peace. Many of the slightly dishonest literary devices of Eminent Victorians are imi- tated in this famous pamphlet, and of course imitated with a skill, a penetration, and an in- tellectual vigour and unscrupulousness quite beyond the comparatively limited talents of Lytton Strachey. In a sense, the most interest- ing character and by far the most important of the dramatis personae of Mr Holroyd's work is Keynes. He was the only member of the gang who was of intrinsic historical impor- tance, and I am interested to learn from volume H that Bertrand Russell, with his usual acuteness, raised the moral point as to whether a man who himself was a pacifist and would have refused to serve in the army if called up, should have devoted so much of his talents, which were perhaps more than talents, to help- ing the running of it war with which he basically disagreed and in which he would not have taken a more active part than helping the Treasury to bamboozle the Americans. This long book, officially about Lytton Strachey, is ' full of materials for a newer and more candid life of Keynes. And it is perhaps odd that, in a book so largely devoted to male homo- sexuals, by far the most attractive character is Carrington, the unfortunate lover of Lytton Strachey who killed herself for love, a gesture of a kind unsuitable to the Bloomsbury ambience.