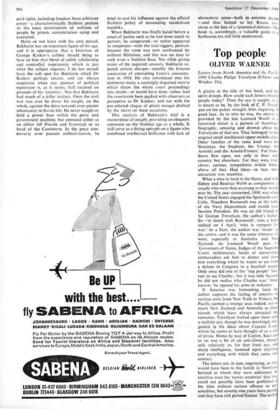 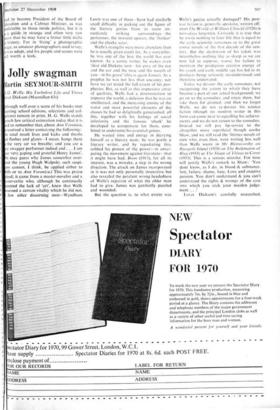 A glance at the title of this book, and the spirit droops. How could such letters interest people today? Then the eye is caught, as it is meant to be, by the look of C. P. Trevel- yan on the jacket: straight, firm, inquiring. A good face. As to who he was, the answer is provided by the late Leonard Woolf in a foreword which is a pattern of thumbnail biography, amusing and shrewd about the Trevelyans of that era. They belonged `to the original small intellectual upper-middle class. Other families of the same kind were the Stracheys, the Stephens, the Youngs, the Arnolds and the Arnold-Fosters,' For them, doors flew open, not only in their own country but elsewhere. For they were vital. clever, curious, sympathetic within limits, above all they Had Ideas—in fact, their attraction was manifest.

What a time to land in the States, and with Sidney and Beatrice Webb as companions, a couple who were then as young as they would ever be. The year concerned, 1898, was when the United States engaged the Spaniards over Cuba. Theodore Roosevelt was at the helm of the Navy Department and would soon become President. He was an old friend of Sir George Trevelyan, the author's father. So—`to lunch with Roosevelt', runs a letter indited on 4 April, 'who is rampant for war.' In a flash, the author was 'inside', at the centre, and it was the same wherever he went, especially in Australia and New Zealand. As Leonard Woolf puts it: 'Governors of States, Judges of the Supreme Court, millionaires, heads of universities, ambassadors ask him to dinner and show him everything which he wants to see from a debate in Congress to a baseball match. Only once did one of the "top people" hesi- tate to see Charles ; but it was only because he did not realise who Charles was.' Once known, 'he opened his arms in welcome'.

If America was fermenting (and the author captures the feeling of tensions of various sorts from New York to 'Frisco), the Pacific seemed a strange area indeed, not so much New Zealand and. Australia as those islands which have always attracted the romantic. Trevelyan looked upon them with a realistic eye, though he was shockingly mis- guided in his ideas about Captain Cook. whom he seems to have thought of as a sort

of pirate. Home by way of Ceylon, Suez and so on was a bit of an anti-climax, though

only relatively so, for that fresh eye, and sharp intelligence, fastened upon anything and everything with which they came into contact.

The letters are, in sum, engrossing, as they would have been to the family in Northum-

berland to whom they were addressed. So

sensitive were the 'newer countries' that they could not possibly have been published a the time without serious offence to per sonalities, but seventy-one years have passe' and they have rich period flavour. The autho

led to become President of the Board of ucation and a Cabinet Minister, as was ctable to those inside politics, but it is a guide in strange and often very raw ices that he may have a firmer little niche history. For in 'fixing' a photographic age, as amateur photographers used to say, was adept, and his people and scenes were ell worth a look.