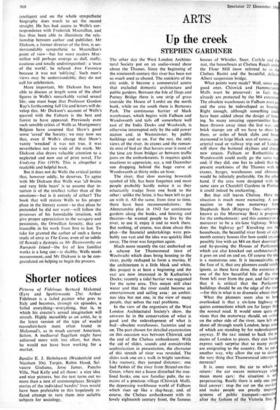 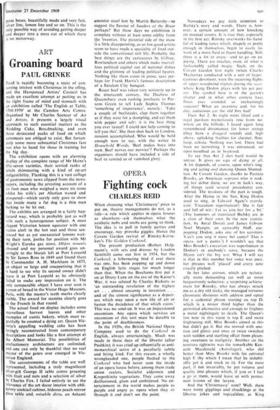 ARTS Up the creek

The other day the West London Architec- tural Society put on an audio-visual show about the Thames. Since the beginning of the nineteenth century this river has been not so much used as abused. The outskirts of the city aside, it became a commercial centre that excluded domestic architecture and public gardens. Between the Isle of Dogs and Putney Bridge there is one strip of grass (outside the House of Lords) on the north bank, while on the south there is Battersea Park. The continuous barrier of black warehouses, which begins with Fulham and Wandsworth and tails off somewhere well east of the India Docks and Woolwich, is otherwise interrupted only by the odd power station and, in Westminster, by public buildings and so on. For the rest, the only views of the river, its cranes and the roman- tic mist of bad air that hovers over it most of the time are from bridges or between traffic jams on the embankments. It requires quick reactions to appreciate, say, a red December sun dropping behind the huge curve at Wandsworth at thirty miles an hour.

The river, that slow moving brownish symbol of life, has been forgotten and most people probably hardly notice it as they reluctantly trudge from one bank to the other: unlike the Seine, it has been left to get on with it. All the same, from time to time, there have been recommendations: the Abercrombie plan in 1943 for continuous gardens along the banks, and housing and theatres—he wanted people to live by the river, to use it, enjoy it and to work there. But nothing, of course, was done about this plan—the financial undertakings were pro- bably too vast and the idea was quickly filed away. The river was forgotten again.

Much more recently the Gt.c embarked on a scheme for Thamesmead (east of Woolwich) which does bring housing to the river, partly reshaped to form a marina. If the architecture is a little bleak and white, this project is at least a beginning and the GLC are now interested in St Katharine's Docks; recently a tidal barrier was suggested for the same area. This meant still clear water and that the river could become an entertainment and sailing area: an ambiti- ous idea but not one, in the view of many people, that solves the real problems.

In the view of the organisers of the West London Architectural Society's show, the answers lie in the conservation of what is good and the redevelopment of what is bad—obsolete warehouses, factories and so on. The part chosen for detailed examination on this occasion was between Chiswick and the end of the Chelsea embankment. With the aid of slides, sounds and considerable sophistication in presentation, the character of this stretch of river was revealed. The slides took one on a walk in bright sunshine. Like memory, they jumped distances: one had flashes of the river from Strand-on-the- Green. where not a house disturbed the tree- lined banks, one saw familiar pubs, the re- mains of a precious village (Chiswick Mall), the depressing workhouse world of Fulham which rises up like a slag-heap; and, of course, the Chelsea embankment with its lovely eighteenth century front, the famous

What points were made? Well, some ver good ones. Chiswick and Hammersmi Malls must be preserved : in fact, the already are protected by the M4 extension The obsolete warehouses in Fulham must go and the area be redeveloped as housing Right enough, although something coul have been added about the design of hou\ ing. So many amazing opportunities hal been thrown away since the last war, an brick stumps are all we have to show fo them, or miles of brick slabs and bow marooned in large black seas of tarmac: an arterial road or railway trip out of Londu will show the battered skylines and drear new estates. Fulham or Rotherhithe o Wandsworth could easily go the same %%a and, if they did, one has to admit that th present murkiness of the Thames with it cranes, barges, warehouses and chimnel would be infinitely preferable. On the tithe: hand, if the area were designed with th same care as Churchill Gardens in Pimlic' it could indeed be enchanting.

But that still leaves Chelsea. Here th situation is much more menacing. A con nection to the new motorway (N. Shepherds Bush (Ringway One—otherwu. known as the Motorway Box) is propose for the embankment: and this connection moreover to be a six-lane highway. Wher• does the highway go? Knocking out th• houseboats, the beautiful river front of eigh teenth century houses (for how could anon possibly live with an M4 on their doorstep? and by-passing the Houses of Parliamen which are also knocked out architecturally it goes on and on and on. Of course the id is a monstrous one. It is inconceivable, o the face of it, that any planners could totall ignore, as these have done. the existence o one of the few beautiful bits of the rive front left over from the past, and fail to that it is critical that the Parliamen buildings should be on the edge of the rive —for this is what is so dramatic about the What the planners seem also to has overlooked is that a six-lane highway quires connections which are far larger tha the normal road. It would seem quite o vious that the motorway should, on arri%• on the other side of the river, turn left an shoot off through south London, large art of which are standing by for redevelopmen anyway. If the ct.c intend to hack the mains of London to pieces. they can hard) express such surprise that so many peep are emigrating to the country. Or, to put i another way, why allow the car to destr the very thing that Thamesmead attempts recreate?

It is, once more, the car to which ",• return : the car means motorways vdli mean more cars: the situation is self perpetuating. Really there is only one Pra tical answer: stop the car on the outcla, and make people use greatly impro systems of public transport—someth after the fashion of the Victoria line, press buses, beautifully made and very fast, silver line, lemon line and so on. This is the only possible way of avoiding getting deeper and deeper into a mess out of which there is no motorway.