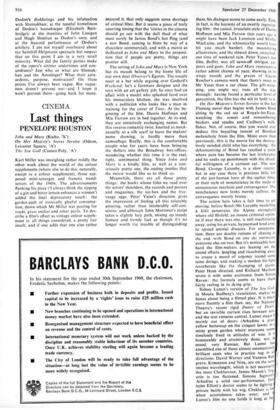 John and Mary (Riako, 'X') On Her Majesty's Secret Service (Odeon, Leicester Square, 'A') The Sea Gull (Cameo-Poly, 'A')

Karl Miller was inveighing rather mildly the other week about the world of the colour supplements (where else to do this, naturally, except in a colour supplement), those sup- posed mini-scourges and frenetic trend- setters of the 1960s. The advertisements flanking his piece CI always think the sipping of a gin and bitter lemon enhances a woman') added the final deprecatory touch: the garden-path of ironically gleeful consump- tion, down which Mr Miller was peering for toads, grass snakes and other perils. To des- cribe a film's effect as vintage colour supple- ment is, all things considered, a pretty fair insult; and if one adds that one also rather enjoyed it, that only suggests some shortage of critical fibre. But it seems a piece of truly unerring timing that the 'sixties in the cinema should go out with the dull thud of what must surely be James Bond's last fling (and

a new Bond, coming to films by way of a chocolate commercial), and with a movie as dedicated as John and Mary to the proposi- tion that if people are pretty, things are prettier still.

The setting of John and Mary is New York but its moods belong to the home life of our own dear Observer's Egoists. The couple meet in a bar while arguing over Godard's Weekend; he's a furniture designer and she toys with an art gallery job; he once had an affair with a model who splashed food over his immaculate kitchen; she was involved with a politician who looks like a man in training for the cover of Time. At the be- ginning of the film, Dustin Hoffman and Mia Farrow are in bed together. At its end, they are tentatively exchanging names. But this reverse romantic twist, knotted as mock- casually as a silk scarf to leave the makers' name showing, is hardly more than camouflage. Really, this is the comfortable couple who for years have been bringing the dollars into the Broadway box-offices, wondering whether this time it is the real, right, sentimental thing. Since John and Mary is a kindly film, as well as a con- sciously pretty one, the ending implies that the movie would like us to think so.

Meanwhile, there are all those pretty things: the books whose titles we read over the actors' shoulders, the records and posters and magazines, the ice-box and the free- range eggs. Peter Yates's direction gives the impression of finding all this tolerably amusing, rather than intolerably self-con- scious; and although John Mortimer's script takes a slightly lazy path, mixing up trendy fantasy and trendy fact as though it's no longer worth the trouble of distinguishing

them,-his dialogue seems to come easily. Ease, in fact, is the keynote of an overtly ingratiat- ing film : the casual, irresolute style of Dustin Hoffman and Mia Farrow (ten years ago it might have been Jack Lemmon and Shirley MacLaine, and the whimsicality would have hit you much harder), the meandering allusiveness, and the slowed down, stretched- out time of weekend rain. Peter Yates's last film, Sutliff, was all sawn-off intrigue, air- ports and guns. John and Mary represents a rather adroit change of pace, showing in its wispy moods and the graces of Gayne Rescher's camera-work that there's more to Mr Yates than a car chase. The gift-wrap- ping, you might say, runs all the way through: having found a particular level of perception, the film has the wit to hold to it.

On Her Majesty's Secret Service is the Ian Fleming novel that begins with James Bond sitting by the sad sea at Royale-les-Eaux, watching the sunset and remembering buckets and spades and Cadbury's milk- flakes. Not, of course, that you would ever deduce this beguiling instant of Bondian melancholy from the film. More even than previously, this is the movie for the destruc- tively minded child who has everything : the dehumanising of Bond has reached a point where pain has become the last irrelevance and he soaks up punishment with the dread- ful willingness of a cartoon cat. The new Bond, George Lazenby, is a slow reacter; but in any case there is precious little left of the just-human hero of the earlier films. or their style of nonchalance in the midst of conspicuous mayhem and extravagance. The nonchalance now looks merely callous, the extravagance merely brassy.

The action here takes a fair time to get moving, before Bond (Mr Lazenby modelling a kilt) penetrates the Alpine stronghold where old Blofeld, an insane criminal optim- ist if ever there was one, is still machinating away, using his private, hypnotised land army to spread animal diseases. For compensa- tion, there are double rations of chasing at the end, with Bond on one ski outoacine everyone else on two. But it's noticeable how hard the film-makers are leaning on the sound effects, jangling and ricocheting away to create a mood of urgency round some tame doings, and making a modest fist-fight reverberate like the thumping of giants. Peter Hunt directed, and Richard Maibum wrote it with some assistance from Simon Raven: the formula seems to have them fairly reeling in its dying grip. Sidney Lumet's version of The Sea Gull. in Moura Budberg's translation, makes no bones about being a filmed play. It is much more fluently a film than, say, the National Theatre's recent rigid Dance of Death. but an invisible curtain rises between acts. and the text remains central. Lumet stages it mainly out of doors (Arkadina a great yellow buttercup on the croquet lawn), in a misty green garden where everyone seems timelessly fixed in attitudes of woe. It it honourably and attentively done; not, in mood, very Russian. But Lumet has assembled one of those almost ostentatiously brilliant casts who in practice tug in all directions. David Warner and Vanessa Red- grave, Konstanin and Nina, are on the sam intense wavelength, which is not necessari the most Chekhovian; James Mason's Trig orin is too flattened, Simone Signoret Arkadina a solid star-performance, Den holm Elliott's doctor seems to be fighting private battle with his wig. Chekhov is l' when actorishness takes over; and Lumet's film no one holds it long at NY