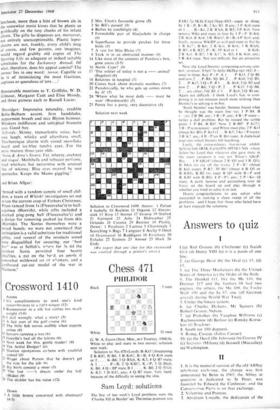 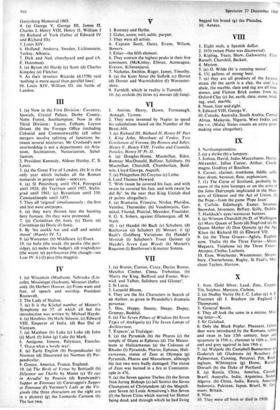 3. (a) The Three Musketeers (b) the United. States of America (c) the Order of the Bath.

5. Under the binary system.

1. It is the numeral version of the old Mirky telenhone exchnnge, the change was first announced by Benn in 1965. the Abbey in question is dedicated to St Peter. was founded by Edward the Confessor. and the Conserv:oive Party is on that exchange.

3. Abraham Lincoln. the dedication of the

9. As their inventor Ricardo (d.1558) said 'nothing is more equal than parallel lines'.

3. (a) the Great Fire of London. (b) It is the only year which includes all the Roman numerals in proper order-t►tnet.xvt.

5. They all 'reigned' simultaneously: the first and last were antipopes.

6. (a) they were thrown into the burning fiery furnace. (b) they were promoted.

3. (a) It is the Kochel number of Mozart's Symphony no 37, of which all but the introduction was written by Michael Haydn.

10. (a) The Birth of Venus by Botticelli (b) Dejeuner sur l'herbe by Manet (c) 'Et ego in Arcadia' by Poussin (d) Rembrandt's Supper at Emmaus (e) Caravaggio's Supper at Emmaus (f) Vermeer's Lady at the Vir- ginals (the three characters on the right are in a picture) (g) the Leonardo Cartoon (h) The last two,

3. They were all artists.

9. Turnhill, which in reality is Tunstall.

2. They were invented by Napier to speed his calculations based on the Number of the Beast, 666.

4. They are the Six Characters in Search of an Author, as given in Pirandello's dramatis personae.

6. (a) The Seven Pillars of Wisdom (b) Seven Types of Ambiguity (c) The Seven Lamps of Architecture.

8. (a) the Pyramids (b) the Pharos (c) the temple of Diana at Ephesus (d) The Mauso- leum at Halicarnassus (e) the Colossus of Rhodes (f) Pyramids, Pharos, Ephesus, Hali- carnassus, statue of Zeus at Olympia (g) Pyramids, Pharos and Mausoleum, although the last two were badly damaged. The statue of Zeus was burned in a fire at Constantin- ople in 476.

9. (a) the Seven against Thebes (b) the Seven Non-Juring Bishops (c) (all Saints) the Seven Champions of Christendom (d) the Magnifi- cent Seven (e) Louis Armstrong's Hot Seven (f) the Seven Cities which warred for Homer being dead, and through which he had living begged his bread (g) the Pleiades.

7. (a) they are all products of the Jurassic strata (b) the earth is a clay, the coal is a shale, the marble, slate and rag are all lime- stones, and Fletton Brick comes from the Oxford Clay (c) Jet, earth, slate, stone, brick, rag, coal, marble.

5. (1) The Curse of Scotland, probably be- cause of the nine lozenges or on the arms of the John Dalrymple implicated in the Mass- acre of Glencoe and the Act of Union. (2) the Pope-from the game 'Pope Joan'.

4. They all look the same in a mirror. Miss- ing letter-X.