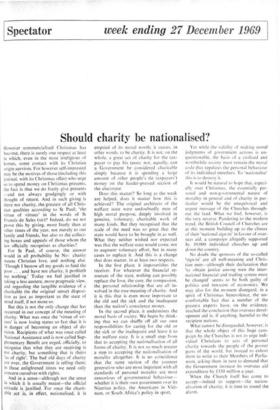 Should charity be nationalised?

However commercialised Christmas has become, there is surely one respect at least in which, even in the most irreligious of homes, some contact with its Christian origin survives. For however self-interested may be the motives of those (including this journal, with its Christmas offer) who urge us to spend money on Christmas presents, the fact is that we do freely give presents —and not always grudgingly or with thought of return. And in such giving is there not charity, the greatest of all Chris- tian qualities according to St Paul; 'the virtue of virtues' in the words of St Francis de Sales (sic)? Indeed, do we not prove this by giving, more freely than at other times of the year, not merely to our family and friends, but also to the collect- ing boxes and appeals of those whom the law officially recognises as charities?

For St Paul, of course, the answer would in all probability be No: charity means Christian love, and nothing else. `Though I bestow all my goods to feed the poor .. . and have not charity, it profiteth me nothing.' Today we feel justified in taking a less austere, more pragmatic view, and regarding the tangible evidence of a charitable (in. the original sense) disposi- tion as just as important as the state of mind itself, if not more so.

But this is not the only change that has occurred in our concept of the meaning of charity. What was once the 'virtue of vir- tues' is now losing status so fast that it is in danger of becoming an object of de- rision. Recipients of what was once called National Assistance and is now called Sup- plementary Benefit are urged, officially, to recognise that what they are receiving is not charity, but something that is theirs 'as of right'. The bad old days of charity are over, the Government is telling them; in these enlightened times we need only concern ourselves with rights.

And in a sense—although not the sense in which it is usually meant—the official attitude is justified. For once the charit- able act is, in effect, nationalised, it is emptied of its moral worth; it ceases, in other words, to be charity. It is not, on the whole, a great act of charity for the tax- payer to pay his taxes; nor, equally, can a Government be considered charitable simply because it is spending a large amount of other people's (ie taxpayers') money on the harder-pressed section of the electorate.

Does this matter? So long as the weak are helped. does it matter how this is achieved? The original architects of the welfare state were undoubtedly men of high moral purpose, deeply involved in genuine, voluntary, charitable work of many kinds. But they recognised that the scale of the need was so great that the state would have to be brought in as well. What they neither wished nor expected was that the welfare state would come, not to augment voluntary effort, but in many cases to replace it. And this is a change that does matter, in at least two respects.

In the first place, it impoverishes the receiver. For whatever the financial re- sources of the state, nothing can possibly replace the love, the care, the compassion, the personal relationship that are all in- volved in the true meaning of charity. And it is this that is even more important to the old and the sick and the inadequate than the nation's conscience money.

In the second place, it undermines the moral basis of society. We begin by think- ing that we can shuffle off all our own responsibilities for caring for the old or the sick or the inadequate and leave it to the welfare state. It is a small step from that to accepting the nationalisation of all forms of charity. It is not so much greater a step to accepting the nationalisation of morality altogether. It is no coincidence that the same section of the younger generation who are most impatient with all standards of personal morality are most censorious of governmental behaviour— whether it is their own government over its Nigerian policy, the Americans in Viet- nam, or South Africa's policy in sport. Yet while the validity of making moral judgments of government actions is un- questionable, the basis of a civilised and worthwhile society must remain the moral code that regulates the personal behaviour of its individual members. To 'nationalise' this is to destroy it.

It would be natural to hope that, especi- ally over Christmas. the essentially per- sonal and non-governmental nature of morality in general and of charity in par- ticular would be the unequivocal and urgent message of the Churches through- out the land. What we find, however, is the very reverse. Pandering to the modern trend. the British Council of Churches arc at this moment building up to the climax of their 'national sign-in' in favour of over- seas aid, a campaign allegedly supported by 10.000 individual churches up and down the country.

No doubt the sponsors of the so-called `sign-in' are all well-meaning and Chris- tian men—although their declaration that `to obtain justice among men the inter- national financial and trading system must be changed' seems to be both guilty of politics and innocent of economics. We may also for the moment disregard. in a spirit of Christmas benevolence, the un- comfortable fact that a number of the greatest experts have, on the evidence, reached the conclusion that overseas devel- opment aid is. if anything. harmful to the recipient nations.

What cannot be disregarded. however, is that the whole object of this huge cam- paign by the Churches is not to urge indi- vidual Christians to acts of personal charity towards the people of the poorer parts of the world. but instead to exhort them to write to their Members of Parlia- ment. asking them in turn to demand that the Government increase its overseas aid expenditure by £150 million a year.

When the Church itself has come to accept—indeed to support—the nation- alisation of charity, it is time to sound the alarm.