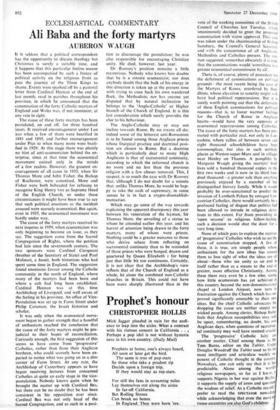 Mick Jagger pleaded in vain for the audi- ence to leap into the aisles. What a contrast with his riotous concert in California . . a Perhaps a pop idol is not without hysteria save in his own country. (Daily Mail)

Prophets at home, one's always heard, All soon or later get the bird.

The same is true of pop-stars So those who take a prudent tip Decide upon a foreign trip, If they would stay as top-stars.

For still the fans in screaming miles Lay themselves out along the aisles In far-off California.

But Rolling Stones Can break no bones.

In England. They were born 'ere.