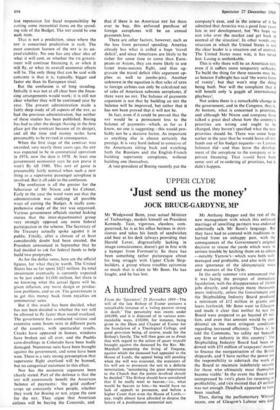 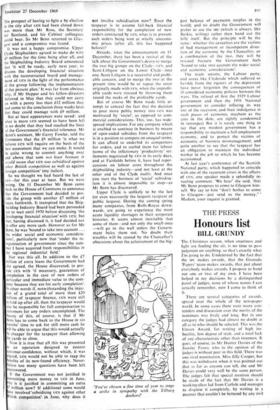 `Just send. us the money'

Mr Wedgwood Benn, your actual Minister of Technology, models himself on President Kennedy. Taut, vigorous, classless, corn- puterised, he is at his office betimes in shirt- sleeves and takes his lunch of sandwiches and beer at his desk (always providing that Harold Lever, disgracefully lacking in image-consciousness, doesn't get in first with a hamper from Fortnum's). So there has been something rather picturesque about his long struggle with Upper Clyde Ship- builders, a group whose troubles epitomise so much that is alien to Mr Benn. He has fought, and he has lost.

Mr Anthony Hepper and the rest of the new management with which this enforced marriage of unwilling partners was endowed admittedly talk Mr Benn's language. But they have had to contend with traditions in- herited from an -unhappy past, with the consequences of the Government's original decision to rescue the yards which were in serious trouble by latching them on to others —notably Yarrow's—which were both well- managed and profitable, and also with their own ignorance of the idiosyncratic ways and manners of the Clyde.

In the early summer tics announced that it was facing the prospect of immediate liquidation, with the disappearance of 14,000 jobs directly, and perhaps many thousands more indirectly, unless the Government and the Shipbuilding Industry Board produced a minimum of £12 million in grants and loans forthwith. Mr Benn went to Glasgow and made it clear that neither he nor the Board were prepared to go beyond £9 mil- lion, and even that amount would be con- ditional on the most stringent conditions regarding increased efficiency. 'There is', he told the Commons, `no safety net beneath any firm or industry in this country'. The Shipbuilding Industry Board had been en- dowed with £53 million of taxpayers' money to finance the reorganisation of the British shipyards, and 'I have neither the power nor the responsibility, to sidetrack the work of the Board to maintain indefinitely security for those who ultimately must themselvo become viable.' In the event the Board was unimpressed by ucs's plans for returning to profitability, and ucs insisted that £9 million was not enough. Deadlock appeared to have been reached.

Then, during the parliamentary Whitsut recess, one of Glasgow's Labour MPS died-

The prospect of having to fight a by-election in the city after ucs had been closed down was more than Mr Ross, the Secretary for Scotland, and his Cabinet colleagues could bear. So Mr Benn returned to Glas- gow and a compromise was found.

It was not a happy compromise. Upper Clyde Shipbuilders agreed to make do with £9 million for the time being after all, and the Shipbuilding Industry Board announced that 'it will be ready, early next year, to discuss the developing financial situation with the reconstructed board and manage- ment of ucs in the light of the performance of the group following the implementation of the present plan.' It was far from obvious why, if Mr Hepper and his fellow-directors believed in May that they could not carry on with a penny less than f12 million they had come to the conclusion three weeks later that they could manage with £9 million. But at least appearances were saved: and what is more ucs seemed to have been left in no doubt that they had reached the limit of the Government's financial tolerance. Mr Benn's assistant, Mr Gerry Fowler, told the Commons that the £9 million 'is what we believe tics will require on the basis of the best assessment that we can make. It would he quite wrong to commit anything over and above that sum not least because it would mean that Tics was subsidised against other British competition as well as against foreign competition' (my italics).

So we thought we had heard the last of ccs—for this year at least. But we were wrong. On 11 December Mr Benn came back to the House of Commons to announce that the Government had decided to pro- hide the group with another £7 million of loans forthwith. It transpired that the Ship- building Industry Board had been persuaded not to wait until 1970 before discussing 'the Jeveloping financial situation' with tics; but that, having discussed it, it had decided not to offer any more cash. However as for Mr Berm, he was 'bound to take into account ... the wider social and economic considera- tions', particularly now that 'under the re- organisation of government since the sum- mer I have acquired fresh responsibilities in the regional industrial field.'

Nor was this all. In addition to the £7 million of extra loans the Government had also agreed, the House discovered, to pro- vide ucs with 'if necessary, guarantees of completion in the case of new orders of particular and immediate value to the com- pany because they are for early completion'. In other words if, notwithstanding the injec- tion of a grand total of more than £20 million of taxpayer finance, ucs were still to fold up after all, then the taxpayer would also be responsible for full compensation to customers for any orders uncompleted. The beauty of this, of course, is that if Mr Berm has to come back to the House in six months' time to ask for still more cash he will be able to argue that this would actually be cheaper for the taxpayer than allowing he yards to close.

Now it is true that all this was presented an operation designed to restore ustomer-confidence, without which, it was rgued, ucs would not be able to reap the nefits of its new-found efficiency. Never- heless too many questions have been left nanswered.

If the Government was not justified in ommitting more money to tics in June, hY is it justified in committing an extra 7 million now? If additional sums would ye involved 'subsidising ucs against other flush competition' in June, why does it

not involve subsidisation now? Since the taxpayer is to assume fall-back financial responsibility for the completion of new orders contracted by tics, what is to prevent such orders being won at wholly unecono- mic prices (after all, this has happened before)?

Already, since the announcement on 11 December, there has been a revival of the talk about the Government's desire to merge the two big groups on the Clyde—tics, and Scott-Lithgow on the Lower Clyde—into one. Scott-Lithgow is a successful and profit- able concern, and to merge the two at the present time would be to repeat the error originally made with tics, when the unprofit- able yards were rescued by throwing them round the necks of the profitable yards.

But of course Mr Benn made little at- tempt to conceal the fact that the decision to pour more public money into tics was motivated by 'social', as opposed to com- mercial considerations. This, too, has wide- spread implications. For any company which is enabled to continue in business by means of open-ended subsidies from the taxpayer is in a position to compete on unequal terms. It can afford to underbid its competitors for orders, and to outbid them for labour (some of the inflationary 'productivity' set- tlements negotiated by tics in its early days, and at Fairfields before it, have had reper- cussions on labour costs throughout the shipbuilding industry—and not least at the other end of the Clyde itself). And once you start the business of 'social' subsidisa- tion it is almost impossible to stop—as Mr Benn has discovered.

Upper Clyde is unlikely to be the last (or even necessarily the largest) recipient of public largesse. During the coming spring many companies, from Rolls-Royce down- wards, are going to experience the most acute liquidity shortages in their corporate histories. It seems almost inevitable that some of them—and not only the small ones —will go to the wall unless the Govern. ment bales them out. No doubt their troubles will be caused by the Chancellor's obsessions about the achievement of the big-

gest balance of payments surplus in the world; and no doubt the Government will prefer to use the IRC (which is always, like Barkis, willing) rather than hand out the lolly itself. But the principle will be the same: whether the casualties are the victims of bad management or incompetent direc- tion of the economy by the Chancellor. or a combination of the two, they will be rescued because the Government feels 'bound to take into account the wider social and economic considerations'.

The trade unions, the Labour party, and areas like Clydeside which suffered so harshly from the rigours of the depression have never forgotten the consequences of ill-considered economic policies between the wars. The refusal of first the 1929 Labour government and then the 1931 National government to consider inflating its way out of the recession, and their indulgence in such pieces of economic mayhem as the cuts in the dole, are rightly condemned in retrospect But it is surely one thing to say that any modern government has a responsibility to maintain a full-employment economy, and to protect the victims of economic or business mismanagement, and quite another to say that the taxpayer has an obligation to maintain the individual worker in the job to which he has become accustomed.

At last year's conference of the Scottish National party, which happened to coincide with one of the recurrent crises in the affairs of tics, one speaker made a splendidly re- vealing comment. 'We hear' she said, 'that Mr Benn proposes to come to Glasgow him- self. We say to him "don't bother to come to Glasgow—just send us the money." ' Madam, your request is granted.