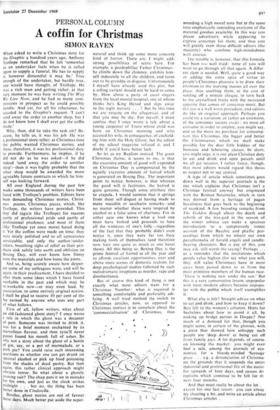 A coffin for Christmas

SIMON RAVEN When asked to write a Christmas story for the Graphic a hundred years ago, Anthony Trollope remarked that he felt 'somewhat as an undertaker feels when he is called upon to supply a funeral. He has to supply it, however distasteful it may be' True enough of the undertaker, but hardly true, one would have thought, of Trollope. He was a rich man and getting richer, at that very moment he was busy writing The Way We Live Now, and he had as many com- missions in prospect as he could possibly handle. And yet, for all his reluctance, he acceded to the Graphic's request. 'I can't send away the order to another shop, but I do not know how I shall ever get the coffin made.'

Why, then, did he take the task on? Be- cause, he tells us, it was his job. He was a professional story-teller; at Christmas time the public wanted Christmas stories; and these, therefore, it was his professional duty to provide. Furthermore, he implies, if he did not do as he was asked—if he did indeed 'send away the order to another shop'—then it was highly probable that the other shop would be awarded the more agreeable future contracts to which he him- self was looking forward.

All over England during the past few weeks some thousands of writers have been faced with Trollope's problem. Editors have been demanding Christmas stories, Christ- mas poems, Christmas pieces, which, like Trollope, the writers have provided. This they did (again like Trollope) for reasons partly of professional pride and partly of professional prudence; and most of them (like Trollope yet once more) hated doing it. Yet the coffins were made on time; they were nicely polished and to all appearance serviceable; and only the author/under- takers, breathing sighs of relief as their pro- ducts sink safely into earth and oblivion on Boxing Day, will ever know how flimsy were the materials and how loose the joints.

And so, being acutely aware how desper- ate some of my colleagues were, and will be again, in their predicament, I have decided to offer them some ideas which I have found workable in the past and which may be re-workable now—or may even lead, by association, to some entirely original notion. I shall be glad to receive 10 per cent of the fee earned by anyone who uses any part of what follows.

First of all, fellow writers, what about an old-fashioned ghost story? I once wrote a tale in which the ghost was a decanter of port. Someone was invited to drink it, was for a brief moment enchanted by its marvellous flavour, and then (you'll never guess) found his mouth full of ashes. So why not a story about the ghost of a bottle of gin, say, or a pot of marmalade, or a pork pie? You could raise such interesting questions as whether one can get drunk on spectral alcohol or pick up food poisoning from the shades of dead pastry. But then again, this rather clinical approach might obviate terror. So what about a ghostly evening suit? The chap puts it on in mistake for his own, and just as the clock strikes midnight . . . but no, the thing has been better done in Cinderella.

Besides, ghost stories are out of favour these days. Much better put aside the super-

natural and think up some more concrete kind of horror. There are, I might add, strong possibilities of satire here. For example, a paedophiliac Father Christmas: he climbs down the chimney, exhibits him- self indecently to all the children, and turns out to be grandpa in disguise. Unfortunately I myself have already used this plot, but a telling variant should not be hard to come by. How about a party of carol singers from the local mental hospital, one of whom thinks he's King Herod and slips away to the night nursery . ? But by this time we are verging on the allegorical, and of that you may be shy. For myself, I must confess that I once wrote a tale about a young carpenter of Truro whose child was born on Christmas morning and who accused his wife, in consequence, of cuckold. ing him with the Holy Ghost; but the editor of my school magazine refused it, and I doubt if you'd have better luck.

So let us try Realism instead. The great Christmas theme, it seems to me, is that the excessive amount of good will expended on Christmas Day is compensated by the equally excessive amount of hatred which is generated on Boxing Day. The important point to notice, however, is that whereas the good will is factitious, the hatred is quite genuine. Though some attribute this to crapula, I would surmise that it springs from sheer self-disgust at having made so many maudlin or saccharin remarks—and no matter whether these were inspired by alcohol or a false sense of charisma. For in either case one knows what a fool one must have looked and proceeds to hate all the witnesses of one's folly—regardless of the fact that they probably didn't even notice it, since they were far too busy making fools of themselves (and therefore now hate one quite as much as one hates them). All this being so, Boxing Day is the prime festival of hatred in all the year and so affords excellent opportunities, over and above mere scenes of domestic realism, for deep psychological studies followed by such melodramatic irruptions as murder, rape and disinheritance.

But of course this kind of thing is not exactly what most editors want for a Christmas Number: what is required is something comfortable and preferably edi- fying. A well tried method (to switch to Christmas articles, now, as opposed to Christmas stories) is to complain about the 'commercialisation' of Christmas, thus sounding a high moral note but at the same time emphatically reminding everyone of the material goodies available. In this way you please advertisers while appearing to express contempt for them, and thus you will gratify even those difficult editors (the majority) who combine high-mindedness with avarice.

The trouble is, however, that this formula has been too well tried: none of you will want to go through all that again. A differ- em slant is needed. Well, quite a good way of adding the extra spice of virtue to people's Christmas pleasure is to draw their attention to the starving masses all over the place, thus enabling them, at the cost of sending off a minute cheque, to turn back to the crystallised fruits with the increased appetite that comes of conscious merit. But this too is a well worn procedure, and editors do like an original approach. Perhaps you could try a variation, or rather an extension, of the consumer society credo: we must all consume in order to employ, you might say, and so the more we purchase for consump- tion this Christmas, the bigger and better the Christmasses which we shall make possible for the dear little kiddies of the banausic and labouring classes. In short. you might urge, it is our plain Christian duty to eat and drink and open parcels until we all get seizures. I rather fancy, though, that most editors would regard this thesis as suspect not to say cynical.

A type of article which sometimes goes down well in the superior journals is the one which explains that Christmas isn't a Christian festival anyway but originated with the Roman Saturnalia, which in turn was derived from a heritage of pagan beastliness that goes back to the beginning of mankind. A few brooding remarks from The Golden Bough about the death and rebirth of the tree-god in the season of the winter solstice can make a specious introduction to a sumptuously ironic account of the Bacchic and phallic pro- ceedings from which we inherit our own paraphernalia of herald angels and candle- bearing choristers. But is any of this, you may ask, still worth the saying? Perhaps ... as a reminder that the institutions which people value highest (for say what you will, they still value Christmas) have in most cases been passed down to us from the most primitive members of the human race. 'There is nothing new under the sun.' But this is a very conservative lesson, unpopular with most modern editors because unpopu- lar with the public which itself exemplifies it.

What else is left? Straight advice on what to eat and drink, and how to keep it down? Best left to the women's columns. Hints for bachelors about how to avoid it all, by making up bridge parties in Dieppe? Not much of a demand for that, though you might score, in certain of the glossies. with a piece that showed how unhappy such people are 'deep down' at being cut off from family joys. A lot depends, of course. on knowing the market: you might even find a sale, among the journals of eco- nomics, for a bloody-minded 'Scrooge piece . . . e.g. a denunciation of Christma' on the grounds that it suspends the entire industrial and professional life of the natioi for upwards of four days, and causes dis ruptions which continue to be felt for th next four months.

And that must really be about the lot . except for one last resort: you can alway try cheating a bit, and write an article about Christmas articles .