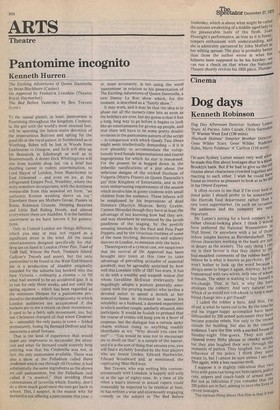 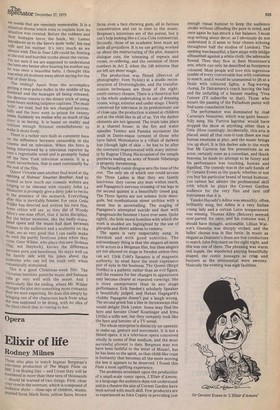 — Dog Day Afternoon Director: Sydney Lumet Stars: Al Pacino, John Cazale, Chris Sarandon 'X' Warner West End (130 mins). Sherlock Holmes' Smarter Brother Director Gene Wilder Stars; Gene Wilder, Nadeline Kahn, Marty Feldman 'A' Carlton (110 mins). I'm sure Sydney Lumet meant very well he made this film about hostages shut in a We", Brooklyn bank. But if he had to give us the OIL.: routine about characters crowded together any reacting to each other, I wish he could nal found an interior as pleasant to look at as he di in his Orient Express. It often occurs to me that if I'm ever held at pistol point I should prefer to be somel,vhete like Harrods food department rather than 3 new town supermarket. On such an occasion the ambience and the company are verY important.

Mr. Lumet's setting for a bank robbery is a

e rather clinical-looking place. I think I would have preferred the National Westminster in Wall -Street. Or anywhere with a lot of those indoor jungles known as Burolandschaft. The eleven characters working in the bank are just as dreary as the scenery. The only thing I ca say in their favour is that they object to thn foul-mouthed comments of the robber-hero. believe he is what is known as psychotic, tritt Won't bother to look up the word because always seem to forget it again. Anyway, he is 3 homosexual with two wives, only one of whom is female. The ether is waiting to buy herself a sex-change. That, in fact, is why the hero attempts the robbery. And very natural ton, Which of us would not rob a bank to help a man friend change into a girl friend? I called the robber a hero. And that, I'm afraid, is what he turns out to be. By the time he and his trigger-happy accomplice have been surrounded by 250 armed policemen they have become popular rebels. Not only to the crowd outside the building, but also in the cinema audience. I saw the film with a packed house of Sunday-night film-goers, They not onlY cheered every filthy phrase or cheeky action, but they also laughed their way through the moments of pathos. They laughed, too, at the behaviour of the police. I think they were meant to, but I cannot be sure unless I see the film again, with a less raucous mob. I suppose it is slightly ridiculous that two boys with guns can bring out helicopters, police cars, snipers and coach-loads of armed men' But not so ridiculous if you consider that the e25Ovpeonlihcoesataregeins.fact, aiming to save the lives o

no words that are remotely memorable. It is a situation drama which tries to explain how its situation was created. Before the robbers and their hostages leave the bank, Mr. Lumet introduces us to the hero's male 'wife', his real Wife and his mother. It's very much as we always wish This Is Your Life could be, hinting at the real and horrible truths about the victim. Pm not sure if we are supposed to understand the hero any better after hearing his mother say he was once a beautiful baby. I thought this was what all mothers went about saying for the rest of their lives.

The ending? Apart from the accomplice getting a neat police bullet in the middle of his forehead and the hostages all being released, the director resorts to the dreary trick of using some heart-sinking tailpiece captions. ,The male 'wife', we read, had his sex changed successfully and the hero went to prison for twenty Years. Suddenly we realise why so much of the story is so boring. It is based on reality and Without enough fictional embellishment to make it more lively.

There is a rather nice built-in comment here on the difference between censorship in the cinema and on television. When the hero is being interviewed by a television reporter he uses a regrettable word and is promptly faded off the New York television screens. It is a word, nevertheless, that is used continually for the rest of the film.

Queen Victoria uses another foul word at the opening of Holmes' Smarter Brother. And to remind us how much our comedy writers are longing to be obscene with royalty John Le Messurier is promptly give a dirty joke to recite in the presence of the monarch. Everything after this is inevitably funnier. For once Gene Wilder has directed and written his own film. Some critics will say, as they did of Woody Allen's one-man effort, that it lacks discipline. But the better moments, like the badly-translated opera and the music-hall duet between Holmes in the audience and a soubrette on the stage, are so very good that I can easily make do with the purely facetious jokes when they come. Gene Wilder, who plays this new Holmes (Sigi, not Sherlock), knows the difference between porn and bawdiness. He stays well on the bawdy side with his jokes about the soubrette who can tell the truth only when romantically stimulated.

This is a good Christmas-week film. The Victorian interiors, pastiche music and hansom cabs go very well with the seaon. And I Particularly like the ending, where Mr. Wilder Changes the plot into something more romantic than we were expecting. He does this simply by bringing one of the characters back from what She was supposed to be doing, with no idea of the final clinch that is coming to her.