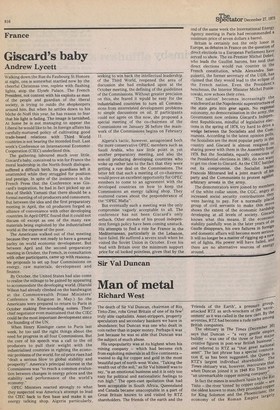 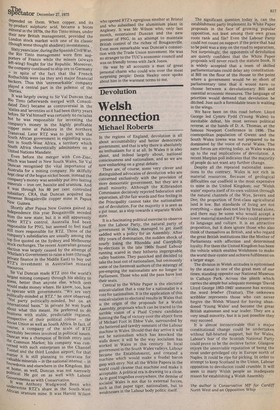 The death of Sir Val Duncan, chairman of Rio Tinto-Zinc, robs Great Britain of one of its few' truly able capitalists. Asset-strippers, property speculators and secondary bankers we have in abundance; but Duncan was one who dealt in coin rather than in paper money. Perhaps it was just because he was so able that Duncan was the subject of much abuse.

His unpopularity was at its highest when his mining company — which had become rich from exploiting minerals in all five continents — wanted to dig for copper and gold in the most beautiful part of north-west Wales. "Taking the wealth out of the soil," as Sir Val himself was to say, "is an emotional business and it is only too easy for political and nationalistic feelings to run high." The open-cast spoliation that had been acceptable in South Africa, Queensland and Canada became unacceptable in a part of Great Britain known to and visited by RTZ shareholders. The friends of the earth and the

'Friends of the Earth', a pressure gr°1113' attacked RTZ as arch-wreckers of the 'environment' as it was called in the new cant. BY the seventies, RTZ had become a rude name among British companies. The obituary in The Times (December 20) , says that Duncan — "a very gentle empire, builder — was one of the three or four major creative figures in post-war British business , and referred to RTZ as "that great national asset". The last phrase has a special connotation if, as has been suggested, the Queen is RTZ's largest individual shareholder. The Times obituary was, however, inaccurate that when Duncan joined it in 1948 Rio Tinto was "an unremarkable copper mining companY_I' In fact the mines in southern Spain by the Rio Tinto — the river 'tinted' by copper oxide — arer the oldest known to man; they provided coPne_ for King Solomon and the Phoenicians; trl, e economy of the Roman Empire largelY depended on -them. When copper, and its by-product sulphuric acid, became a boom mineral in the 1870s, the Rio Tinto mines, under their new British management, Provided the London stock market with one of its classic (though some thought shadiest) investments. , Sixty years later, during the Spanish Civil War, the Rio Tinto management were firm supPorters of Franco while the miners (always left-wing) fought for the Republic. Moreover, the company continued to ship ore to Germany — in spite of the fact that the French Rothschilds were (as they are) major financial backers. Thus this 'unremarkable' company Played a central part in the polemic of the 'thirties.

It was largely owing to Sir Val Duncan that Rio Tinto (afterwards merged with Consolidated Zinc) became as controversial in the sixties and 'seventies as it had been thirty years before. Sir Val himself was certainly no racialist but he was responsible for investing the company's money in the highly profitable Copper mine at Palabora in the northern Transvaal. Later RTZ was to join with the South African government in exploiting uranium in South-West Africa, a territory which South Africa theoretically administers on a United Nations Mandate.

Even before the merger with Con-Zinc, Which was based in New South Wales, Sir Val Duncan recognised the vital importance of Australia for a mining company. He skilfully

kept clear of the bogus nickel boom; instead the company's money was sensibly put into lasting Minerals — iron ore, bauxite and uranium. And it was through his 80 per cent controlled subsidiary, CRA, that Duncan acquired the immense Bougainville copper mine in Papua New Guinea.

Shortly after Papua New Guinea gained its independence this year Bougainville seceded from the new state; but it is still apparently ander RTZ's control. Australia had been responsible for PNG, but seemed to feel itself still more responsible for RTZ. Three of the coMpany's subsidiaries are usually among the top five quoted on the Sydney and Melbourne stock exchanges. The recent Australian general election was largely caused by the attempt of Whitiam's Government to raise a loan (through Private finance in the Middle East) to buy out RTZ's investment in Australian mineral resources.

Sir Val Duncan made RTZ into the world's largest mining company through his ability to gaess, better than anyone else, which ores Would make money where. He knew, too, how to operate with governments. "We are very Politically-minded at RTZ," he once observed. Not party politically-minded, but on an International basis." In private he was frank ,about what this meant. He preferred to do "Jasiness with stable, predictable regimes, `rrespective of their political colour — the ,, riviet Union as well as South Africa. In fact, of course, a company of the scale of RTZ Laevitably becomes involved in political issues. uuncan was a champion of British entry into the Common Market; his company was concerned with such enterprises as the Channel runnel and the third London airport; for that Matter it is still planning to excavate for ,valuable minerals — in the national interest — in :tnovvdonia and elsewhere in the Kingdom. But

home, as well, Duncan was not narrowly GPolitical. He got on as well with Labour

Lt Was Anthony Wedgwood Benn who u,h,sderwrote RTZ's share in the South-west 'Atrican uranium mine. It was Harold Wilson who opened RTZ's egregious smelter at Bristol and who subsidised the aluminium plant in Anglesey. It was Mr Wilson who, only last month, entertained Duncan and the new premier of PNG, in an attempt to maintain British control of the riches of Bougainville. Even more remarkable was Duncan's connection with the Trade Union movement. He was no stranger to the TUC's economic council and was on friendly terms with Jack Jones. He was by all accounts a man of great personal charm who could win over the most surprising people: Denis Healey once spoke about him in the warmest terms to me.