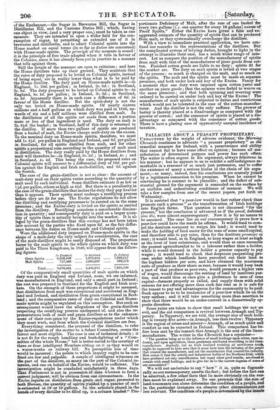 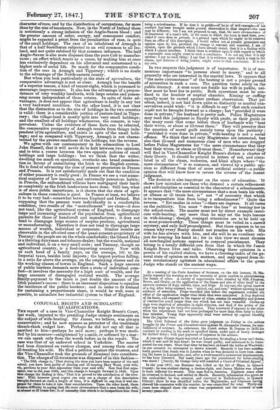 It is asserted that "a poor-law would in fact -rather

check than such a process" as the transformation of Irish holdings into English farms. That question is not discussed "'for the present,' but the conclusion is advanced as if the proof, deferred sine die, were almost supererogatory. Now it is by no means -to be assumed. The onus lies on our contemporary to prove how-a poor-law could have the result he affirms. It would tend to com- pel the destitute occupant to resign his land ; it would tend to make the holding of land easier for the man of some small capital, and therefore able to pay rates, than for the destitute promisor or rent ; it would tend, as in England, to keep wages at least as high as the level of bare subsistence, and would thus at once reconcile the poorest agriculturalist to be a labourer rather than a holder; while it would demand in the holder a greater capacity to pay: wages ; it would tend to check that desperate pauperizing pro- cess- under which landlords have parcelled out their land to the highest bidders per acre, and have obtained the maximum ratio of produce as their share as rent, because it would keep back a part of that produce as poor-rate, would promote a higher rate of wages, would discourage the renting of land by insolvent par- ties, and would thus at once give a preference to men of some capital—farmers properly so called, and supply them with. solid reasons for not offering more than such fair rent as it is safe for the tenant to pay and advantageous for the community to be paid. Such appear to us to be tendencies of a poor-law which lie on the very surface ; and it will take something more than assertion to show that there would be an under-current in a diametrically op- posite direction. Some pains are taken to show that small holdings tae not an evil, and the old comparison is revived between.Armagh and Tip- perary. In Tipperary, we are told, the average size of each hold- ing is twenty-five acres—in Armagh, less than twelve': Tipperary is the region of crime and misery—Armagh, of as much quiet and comfort as can be expected in Ireland. This comparison has be- fore been met by the remark that Armagh is the seat of the linen.. manufacture. The writer in the Chronicle has a rejoinder— "The question being as to the influence of small holdings apes crime, upon in- dustry, and upon agriculture, these gentlemen attributed everything to the linen, manufacture. Anybody, but an Irish landlord resisting an unwelcome truth, might be expected to have seen that it must have been the industry of the people that created the manufacture, and not the manufacture that created the industry. How comes it that the orderly, and industrious habits of the NorthenrIrish, which have produced not only manufactures but many other good results, are found to coexist with small holdings, and to give the lie to the narrow dogmas of some of our economists ? "

We will not undertake to say " how " it is, quite so dogmati- cally as our contemporary asserts the fact ; but before the fact can be admitted, a few other facts that lie more obviously on the sur- face must be explained away. No one pretends that the size -.of land-tenements can alone determine the condition of a people, and in the particular instances we observe other circumstances not less relevant. The condition of a people is determined by the innate

character of race, and by the distribution of occupations, far more than by the size of tenements. Now, in the North of Ireland there is notoriously a strong- infusion of the Anglo-Saxon blood ; and the greater amount of order, energy, and consequent comfort, might be expected it priori from the peculiarities of race, in spite of the small holdings. The case of an inhabitant of Armagh that of a half Scotchman subjected to an evil common to all Ire- land, and not quite subdued by that common influence. The half Anglo-Saxon is also more disposed than the pure Celt to manufac- tures; an effect which reacts as a cause, by making him at once less exclusively, dependent on his allotment and accustomed to a higher scale of social life. So much for the comparative condi- tion of the man in Armagh and Tipperary; which is no doubt to the advantage of the North-eastern county. But when you look particularly at the state of agriculture the comparative advantage is not so clear. Armagh has the benefit of a superior tenure, a kind of tenant-right, which is presumed to encourage improvements. It also has the advantage of a prepon- derance of very wealthy landlords, with large estates and posses- sing means independent of those estates. In spite of those ad- vantages, it does not appear that agriculture is really: in any but a very backward condition. On the other hand, it is not clear that the distinction as to the size of holdings in the two counties is valid : there is a considerable portion of pasture-land in Tippe- rary; the tillage-land is mostly split into very small holdings ; and the smallest of an holdings whatsoever, the conacre, is very prevalent. Unless the evidence of these facts can be rebutted, the comparative prosperity of Armagh. results from things inde- pendent of its agriculture, and exists in spite of the small hold- ings; and as compared with Tipperary, Armagh is not charac- terized by the greater smallness of the holdings, but the reverse.

We agree with our contemporary in his admonition to Lord John Russell, that it will never do to halt between two opinions,. and to trim a course between the two opposite policies of small holdings and large holdings : but we think that the writer, dwelling too much on specialties, overlooks one broad considera- tion in favour of assimilating the Irish to the English system. He is fond of advancing the case of peasant proprietors in France and Prussia. It is not satisfactorily made out that the condition of either peasantry is really good : in France we see a Nast nume- rical majority of low incomes, and universally penurious habits; in Prussia, the enfranchised villeins have mortgaged their lands as completely as the Irish landowners have done. Still less what is of more public importance, is it shown that the state of? agri- culture in those countries is good. In France at least, we believe it to be very bad—somewhat between England and Ireland. But supposing that the peasant were individually in a comfortable condition, two results of the " morcellement " are clear—it does not tend, like the agricultural system of England, to disengage large and increasing masses of the population from agricultural pursuits for those of handicraft and manufactures ; it does not tend to disengage large masses of surplus produce, agricultural or manufacturing. Therefore it does not tend to disengage large masses of wealth, individual or corporate. Similar results are observable in the oft-cited case of the quasi-peasant-proprietary of Tuscany: the people are on the whole comfortable; the Grand Duke is a thriving dairyman and tobacco-dealer; but the wealth, national and individual, is on a very small scale ; and Tuscany, though an agricultural country, is a food-importing country. Now with us each head of a family pays, on the average 10/. to the

Imperial taxes, besides local imposts; the largest portion falling, in a ratio far above the average, on the employing classes and on the-working classes of towns in England. Such a huge amount of public burdens demands more than a state of individual com- fort—it involves the necessity for a high sco.le of wealth, and for large amounts of disengaged realized wealth. The average family-payment to the taxes is just double the amount of the Irish peasant's income : there is an incessant disposition to equalize the incidence of the public burdens ; and in order to fit Ireland for sustaining a proportionate share, it would be well, were it possible, to assimilate her industrial system to that of England.