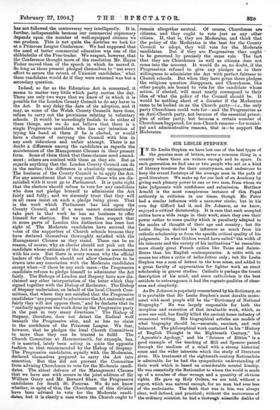 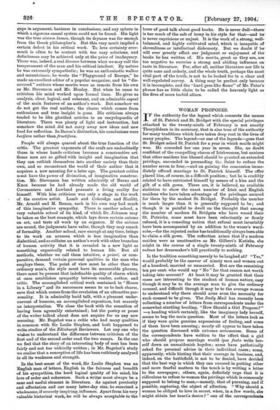 I N Sir Leslie Stephen we have lost one of the

best types of the genuine man of letters, never a common thing in a country where there are writers enough and to spare. In each generation we find one or two people who act as a kind of literary trustees for their countrymen, and endeavour to keep the errant footsteps of the average man in the path of good literature. We make up for our lack of an Academy by giving such plenary power to one or two men, from whom we take judgments with confidence and submission. Matthew Arnold is the most conspicuous instance of this Papal authority in criticism in our times, though Mr. Pater had a similar influence with a narrower circle; but in his own day Gifford had it, and Dr. Johnson, as we know, enjoyed a critical dictatorship. It is rare that such accepted critics have a wide range in their work, since they owe their power rather to some quality which is peculiarly adapted to the modes of thought of their age and country ; but Sir Leslie Stephen derived his influence as much from his catholic scholarship as from the specific critical quality of his judgments. In what Gibbon would have called" the width of his interests and the variety of his inclinations" he resembles more closely great French critics like Paine and Sainte- Beuve than his English contemporaries. A critic with us means too often a critic of belles-lettres only ; but Sir Leslie Stephen was a man of letters in the true sense, and added to a great faculty of appreciation for lighter work an exact scholarship in graver studies. Catholic is perhaps the truest description of his mind, and since catholicism is the best antidote to extravagance, it had the cognate qualities of clear- ness and simplicity.

As Dr. Johnson is popularly remembered by his dictionary, so it is probable that Sir Leslie Stephen's most durable monu- ment with most people will be the "Dictionary of National Biography." He was largely responsible for both the inception and execution of that invaluable work, which, as some one said, has finally killed the ancient home industry of occasional writing. His biographical articles are models of what biography should be,—accurate, succinct, and well balanced. The philosophical work contained in his "History of English Thought in the Eighteenth Century," his "Agnostic's Apology," and his "Science of Ethics" is a good example of the teaching of Mill and Spencer passed through the medium of a mind with a strong historical sense and the wider interests which the study of literature gives. His treatment of the eighteenth-century Rationalists is admirable, for he had the sympathetic understanding of their work which is based on considerable mental kinship. He was essentially the Rationalist to whom the world is made up of a number of clear wrongs and a quantity of obvious rights. He gave up Holy Orders, we are told, without a regret, which was natural enough, for no man had ever less of the ecclesiastic. The faith that was in him was always clear, well defined, and practical ; without the narrowness of the ordinary scientist, he had a thorough scientific dislike of

gaps in argument, haziness in conclusions, and any sphere in which a rigorous causal system could not be found. His light was the true siccum lumen, though its dryness was far enough from the Greek philosopher's. But this very merit implied a certain defect in his critical work. To love certainty over- much is often to be content with too easy solutions, and definiteness may be achieved only at the price of inadequacy. There was, indeed, a real divorce between what we may call the temperament of the man and his critical intellect. By nature be was extremely sympathetic ; he was an enthusiastic walker and mountaineer, he wrote the "Playground of Europe," he made an excellent editor of a popular magazine, and he " dis- covered " authors whose merits were as remote from his own as Mr. Stevenson and Mr. Henley. But when he came to criticism his mind worked upon formal lines. He gives us analysis, clear, logical, and coherent, and an admirable ezpos4 of the main features of an author's work. But somehow we do not get the real author; the charm which comes from enthusiasm and true insight is gone. His criticism always tended to be like glorified articles in an encyclopaedia of literature. There was plenty of light and instruction, but somehow the mind did not carry away new ideas and new food for reflection. In Bacon's distinction, his conclusions were lualera rather than fructifera.

People will always quarrel about the true function of the critic. The greatest exponents of the craft are undoubtedly those in whose hands criticism becomes a constructive art. Some men are so gifted with insight and imagination that they can rethink themselves into another society than their own, and so reconstruct the world of their author that it acquires a new meaning for a later age. The greatest critics must have the power of divination, of imaginative construc- tion. Mr. Stevenson has written admirably of Burns and Knox because he had already made the old world of Covenanters and Lowland peasants a living reality for himself. With him criticism was only a stage in the work of the creative artist. Lamb and Coleridge and Hazlitt, Mr. Arnold and M. Renan, each in his own way had much of this imaginative sympathy. There is another school, a very valuable school of its kind, of which Dr. Johnson may be taken as the best example, which lays down certain axioms on art, and tests all work by an organon. If the axioms are sound, the judgments have value, though they may smack of formality. Another school, rare enough at any time, brings to its work an acumen which is less imaginative than dialectical, and so collates an author's work with other branches of human activity that it is revealed in a new light as something organically related to human life. But all methods, whether we call them intuitive, a priori, or com- parative, demand certain personal qualities in the man who employs them. The point of view must be other than the ordinary man's, the style must have its memorable phrases, there must be present that indefinable quality of charm which at once establishes sympathy between reader, author, and critic. The accomplished critical work contained in "Hours in a Library" and its successors seems to us to lack charm, save that which comes from the revelation of an attractive per- sonality. It is admirably lucid talk, with a pleasant under- current of humour, an accomplished exposition, but scarcely an interpretation. We close the book with the sensation of having been agreeably entertained; but the poetry or prose of the writer talked about does not acquire for us any new meaning. Mr. Bagehot was a critic who had many qualities in common with Sir Leslie Stephen, and both happened to write studies of the Edinburgh Reviewers. Let any one who wishes to understand the difference between criticism of the first and of the second order read the two essays. In the one we feel that the story of an interesting body of men has been fairly and not too unkindly written ; in Mr. Bagehot's study we realise that a conception of life has been ruthlessly analysed in all its weakness and strength.

In the best sense of the word, Sir Leslie Stephen was an English man of letters, English in the fairness and breadth of his sympathies, the hard logical quality of his mind, his love of order and coherence. Such a writer must always be a sane and useful element in literature. As against preciosity and affectation and our many latter-day sins, he exercised a wholesome, if scarcely inspiring, influence. Apart from his very valuable historical work, he will be always acceptable to the lover of good talk about good books. He is never dull—there is too much of the salt of irony in his style for that—and he is never capricious or unjust. It is the work of a strong, well- balanced, and highly caltivated mind, which is incapable of slovenliness or intellectual dishonesty. But we doubt if he will ever greatly affect our judgment or enjoyment of the books he has written of. His merits, great as they are, are too negative to exercise a strong and abiding influence on taste in literature. For, after all, neither literature nor life is quite sane and orderly, and the whole truth, perhaps the most vital part of the truth, is not to be looked for in a clear and well-regulated survey. A thing may be perfect only because it is incomplete, and the "hard gem-like flame" of Mr. Pater's phrase has as little claim to be called the heavenly light as the fires of more turbid altars.