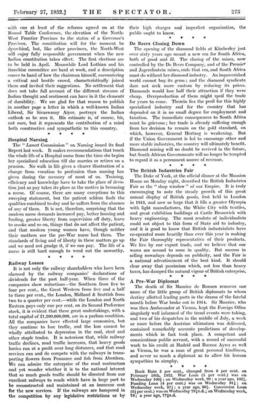 Page 3, 27 February 1932 — De Beers Closing Down The opening of the diamond fields
Close

De Beers Closing Down The opening of the diamond fields

at Kimberley just over sixty years ago meant a new era for South Africa, both of good and ill. The closing of the mines, now controlled by the Dc Beers Company, and of the Premier and Jagersfontein mines, ends that era, and South Africa must do without her diamond industry. An impoverished world cannot buy its gems ; and the diamond syndicate dare not seek more custom by reducing its prices. Diamonds would lose half their attraction if they were cheap. Overproduction of them might spoil the trade for years to come. Therein lies the peril for this highly specialized industry and for the country that has depended on it in no small degree for employment and taxation. The immediate consequences to South Africa must be grievous ; her trade is already suffering enough from her decision to remain on the gold standard, on which, however, General Hertzog is weakening. But if the Union Government is led to encourage other and more stable industries, the country will ultimately benefit. Diamond mining will no doubt be revived in the future, but South African Governments will no longer be tempted to regard it as a permanent source of revenue.