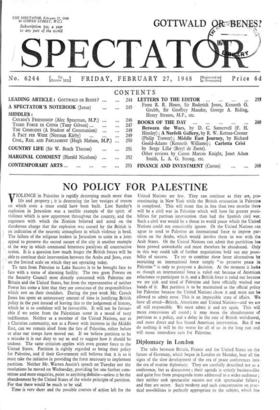 VIOLENCE in Palestine is rapidly destroying much more than life and property ; it is destroying the last vestiges of reason on which even a truce could have been built. Last Sunday's explosion in Jerusalem was a terrible example of the spirit of violence which is now uppermost throughout the country, and the eagerness with which the Zionists believed and acted on the slanderous charge that the explosion was caused by the British is an indication of the neurotic atmosphere in which violence is bred. The failure of the religious leaders in Jerusalem to unite in a joint appeal to preserve the sacred nature of the city is another example of the way in which communal bitterness paralyses all constructive action. It is a question how much longer the British forces will be able to continue their intervention between the Arabs and Jews, even on the limited scale on which they are operating today.

To turn from Palestine to Lake Success is to be brought face to face with a scene of alarming futility. The two great Powers on the Security Council most directly concerned with Palestine are Britain and the United States, but from the representative of neither Power has come a hint that they are conscious of the responsibilities which rest on their shoulders. During the past week Mr. Creech Jones has spent an unnecessary amount of time in justifying British policy in the past instead of leaving this to the judgement of history, which he is so confident will be favourable. It will not be favour- able if we retire from the Palestinian scene in a mood of testy indifference. Neither as a member of the United Nations, nor as a Christian community, nor as a Power with interests in the Middle East, can we remain aloof from the fate of Palestine, either before or after our troops have moved out. If we believe partition to be a mistake it is our duty to say so and to suggest how it should be undone. The same criticism applies with even greater force to the United States. Partition is rightly regarded as being their policy for Palestine, and if their Government still believes that it is so it must take the initiative in providing the force necessary to implement partition. Neither Mr. Warren Austin's speech on Tuesday nor the resolutions he moved on Wednesday, providing for one further com- mittee and more enquiries, point to anything definite—unless it be the abandonment by the United States of the whole principle of partition. For that there would be much to be said.

Time is very short and the possible courses of .action left for the United Nations are few. They can continue as they are, pro- crastinating in New York while the British evacuation in Palestine is completed. This will mean that in less than two months there will be a civil war in Palestine which will have far greater possi- bilities for partisan intervention than had the Spanish civil war. Such a civil war would be a threat to world peace which the United Nations could not conceivably ignore. Or the United Nations can agree to send to Palestine an international force to impose par- tition on the Arabs, which would involve them in war with the Arab States. Or the United Nations can admit that partitition has been proved unworkable and must therefore be abandoned. Only in this way could talk of further negotiations hold out any possi- bility of success. To try to combine these latter alternatives by recruiting an international force simply " to preserve peace in Palestine " is only to postpone a decision. At the moment it looks as though an international force is ruled out because of American reluctance to participate in it, and a British force is ruled out because we are sick and tired of Palestine and have officially washed our hands of it. But partition is to be maintained as the official policy for Palestine because the United Nations chose it and must not be allowed to admit error. This is an impossible state of affairs. We have all erred—British, Americans and United Nations—and we are all still responsible. We must admit it and try again. This will mean concessions all round ; it may mean the abandonment of partition as a policy, and a delay in the rate of British withdrawal, and more direct and less biased American intervention. But if we do nothing it will be the worse for all of us in the long run and will mean immediate ruin for Palestine.