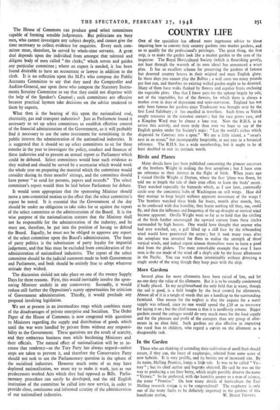 Page 11, 27 February 1948 — Many details have just been published concerning the pioneer successes
Close

Many details have just been published concerning the pioneer successes

of the brothers Wright in making the first aeroplane ; but I have seen no reference to their interest in the flight of birds. When years ago I visited Orville Wright at Dayton, where the first 'plane was flown, he told me at length the tale of their joint effort to learn the birds' secret! They watched especially the buzzards which, as I saw later, continually circle over the concentric hubs of Washington on still wings. How did they manage to keep height without apparent movement of the wings ?; The brothers watched these birds for hours, month after month, but, as he confessed with due humility, they learnt nothing till they, too, could fly, and then the influence and frequency of the up-draught or vertical wind became apparent. Orville Wright went so far as to hold that the circling. of. the birds further encouraged the upward current from these circles, surrounded by high houses. One would have thought that anyone who had ever watched, say, a gull lifted up a cliff face by the rebounding, wind would have penetrated the secret ; but it took many years afteri the aeroplane was invented for fliers to realise the strength of these vertical winds, and indeed expert airmen themselves were to learn a good deal from the gliders. The most remarkable example that ever I have seen is the use made of the wind off a ship's side by the lesser albatrosses in the Pacific. You can watch them interminably without detecting a. single stroke of the wing though they keep pace with the ship.