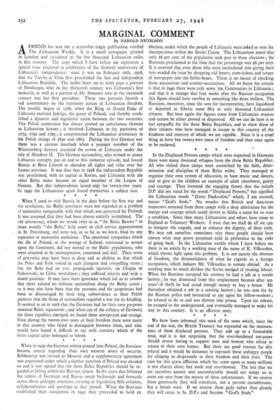 AFRIEND has sent me a somewhat tragic publication entitled The Lithuanian Weekly. It is a small newspaper printed in London and circulated to the five thousand Lithuanian exiles in this country. The copy which I have before me represents a special issue prepared in celebration of the thirtieth anniversary of Lithuania's independence: since it was on February 16th, 1918, that the Taryba at Vilna first proclaimed the free and independent Lithuanian Republic. The leaflet bears on its front page a portrait of Mindaugas, who in the thirteenth century was Lithuania's first monarch, as well as a portrait of Mr. Smetona who in the twentieth century was her first president. These two portraits furnish a sad commentary on the transitory nature of Lithuanian freedom. The trouble began in 1386, when the King or Grand Duke of Lithuania married Jadviga, the queen of Poland, and thereby estab- lished a dynastic and legislative union between the two countries. The Polish connection has always proved an unfortunate element in Lithuanian history ; it involved Lithuania in the partitions of 1772, 1792 and 1795 ; it compromised the Lithuanian aristocracy in the Polish risings of 183o and 1863. During the first German war there was a curious interlude when a younger member of the Wurttemberg dynasty accepted the crown of Lithuania under the title of Mindove II. The German nationalists, who wished to annex Lithuania outright, put an end to this romantic episode, and forced Russia at Brest Litovsk to abandon all rights and titles over her former province. It was thus that in 1918 the independent Republic was proclaimed, with its capital at Kovno, and Lithuania with the other Baltic states became an equal member of the League of Nations. But this independence lasted only for twenty-two years. In 1940 the Lithuanians again found themselves a subject race.

When I used to visit Russia in the days before the first war and the revolution, the Baltic provinces were not regarded as a problem of nationality comparable with that which was presented by Finland. It was assumed that they had been almost entirely assimilated. The old aristocracy, whom we would refer to as " the Baltic Barons " or more usually " the Balls," held court or civil service appointments in St. Petersburg, and were not, in so far as we knew, fired by any separatist or nationalist ambitions. The emotional sympathies which the ills of Poland, or the wrongs of Ireland, continued to arouse upon the Continent, did not extend to the Baltic populations, who were assumed to be unimaginative, contented and dull. Their sense of grievance may have been as deep and as abiding as that which the Poles and Irish voiced in such plangent and compelling terms ; but the Baits had no vast propaganda agencies, no Chopin or Paderewski, no Celtic wistfulness ; they suffered silently and with a dumb patience. It may have been ignorance which led us to assume that there existed no militant nationalism along the Baltic coasts ; or it may also have been that the peasants and the proprietors had been so discouraged by their long subservience to their Polish partners that the flame of nationalism required a war for its kindling. It seemed to us in 1916 that the Germans had for their own purposes invented Baltic separatism ; and when out of the collapse of Germany the three republics emerged, we found them unexpected and strange. Even during the twenty-two years of their freedom there were many in this country who failed to distinguish between them, and who would have found it difficult to say with certainty which of the three capital cities belonged to whom.

* * * * When in 1939 the German armies poured into Poland, the Russians became uneasy regarding their own western zones of security. Ribbentrop was invited to Moscow and a supplementary agreement was negotiated under which a further partition of Poland was decided on and it was agreed that the three Baltic Republics should be re- garded as falling within the Russian sphere. In the years that followed the armies of Germany and Russia swept backwards and forwards across those unhappy countries, creating or liquidating fifth columns, collaborationists and quislings as they passed. When the Russians established their occupation in 1940 they proceeded to hold an election, under which the people of Lithuania were asked to vote for incorporation within the Soviet Union. The Lithuanians assert that only 16 per cent. of the population took part in these elections ; the Russians proclaimed at the time that the percentage was 96 per cent. It is asserted that even those who were intimidated into giving their vote evaded the issue by dropping old letters, tram-tickets and scraps of newspaper into the ballot-boxes. There is no means of checking these accusations and counter-accusations. All we know for certain is that in 1940 there were only some 700 Communists in Lithuania ; and that it is strange that four weeks after the Russian occupation this figure should have swollen to something like three million. The Russians, moreover, since the vote for incorporation, have liquidated or deported to Siberia some fifty to sixty thousand Lithuanian citizens. But here again the figures come from Lithuanian sources and cannot be either proved or disproved. All we can do here is to feel sympaffiy for the three Baltic Republics, and to show those of their citizens who have managed to escape to this country all the kindness and courtesy of which we are capable. Since it is a cruel thing to have but twenty-two years of freedom and then once again to be enslaved.

In the, Displaced Persons camps which were organised in Germany there were many thousand refugees from the three Baltic Republics. All who visited these camps were astonished by the faith, deter- mination and discipline of these Baltic exiles. They managed to organise their own system of education, to have music and dances, and to give to the children an example of adult cleanliness, gaiety and courage. They invented the engaging theory that the initials D.P. did not stand for the words "Displaced Persons," but signified the Lithuanian words " Dievo Paukstelini," which, I am assured, means "God's birds." No wonder that British and American inspectors returned from these camps with a deep admiration for the energy and courage which could invent so blithe a name for so sour a condition. Since then many Lithuanians and others have come to England as Voluntary Workers. I trust that we shall do all we can to mitigate the tragedy, and to enhance the dignity, of their exile. We may ask ourselves sometimes why these people should have chosen what may prove perpetual exile in preference to the risks of going back. In the Lithuanian weekly which I have before me there is an article by a working man of the name of K. Vilkauskas, which throws light upon this problem. It is not merely the absence of freedom, the distastefulness of what he regards as a foreign occupation, which induces Mr. Vilkauskas to remain abroad. As a working man he much dislikes the Soviet method of treating labour. When the Russians occupied his country he had a job in a textile factory ; he was dismissed from this employment because after ten years of thrift he had saved enough money to buy a house. He thereafter obtained a job in a canning factory ; he was sent for by the Russian police and instructed to spy upon his fellow-workers ; he refused to do so and was thrown into prison. Upon his release, he escaped to the underground, and eventually managed to make his way to this country. It is an effective story.

We have been informed this week of the sums which, since the end of the war, the British Treasury has expended on the mainten- ance of these displaced persons. They add up to a' formidable total, and it is not surprising that the over-burdened tax-payer should resent having to support men and women who refuse to return to their own homes. But there are good reasons for this refusal and it would be inhuman to reproach these unhappy people for clinging so desperately to their freedom and their lives. The cure for this grave affliction which has come upon so many millions is not charity alone, but work, and resettlement. The fact that we are ourselves uneasy and uncomfortable should not tempt us to avert our eyes from the misery of these unfortunates. If we receive them generously they will constitute, not a present encumbrance, but a future asset. If we receive them gaily rather than glumly they will cease to be D.P.s and become "God's birds."