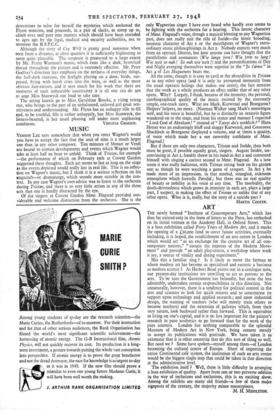 THE newly formed " Institute of Contemporary Arts," which has- thus far existed only in the form of letters to the Press, has embarked on its initial venture at the Academy Hall, in Oxford Street. This is a loan exhibition called Forty Years of Modern Art, and it marks the opening of a £50,000 fund to cover future activities, eventually including, it is hoped, the establishment of an arts centre in London which would act " as an exchange for the creative art of all con- temporary nations," " sustain the impetus of the Modein Move- ment " and provide " an adult play-centre, a workshop where work is joy, a source of vitality and daring experiment."

Has this a familiar ring ? Is it likely to move the layman to whom modern art has become as specialised and esoteric a business as modern science ? As Herbert Read points out in a catalogue note, our present-day institutions are unwilling to act as patrons to the arts. To be sure the Government has belatedly, but none the less admirably, undertaken certain responsibilities in this direction. Not unnaturally, however, there is a tendency for political control in -the- arts and sciences to look for quick returns and to concentrate its support upon technology and applied research ; and upon industrial

design, the training of teachers (who will merely train others to become teachers) and the extension of galleries which, from their very nature, look backward rather than forward. This is equivalent to living on one's capital, and it is no less important for the painter's research in pure aesthetics to go forward than for the work of the pure scientist. London has nothing comparable to the splendid Museum of Modern Art in New York, being content merely" to accept its publications with gratitude. We have taken it as axiomatic that it is other countrie that do this sort of thing so well. But need we ? Some have spoken—myself among them—of LondOn becoming the cultural centre of Europe. Short of importing the entire Continental café system, the institution -of such an arts centre would be the biggest single Step that could be taken in that direction at the administrative level.

The exhibition itself ? Well, there is little difficulty in arranging a loan exhibition of quality. Apart from one or two perverse oddities in the way of inclusions and exclusions, this is an exciting show. Among the exhibits are many old friends- few of them major signposts of the century, the majority minor masterpieces.