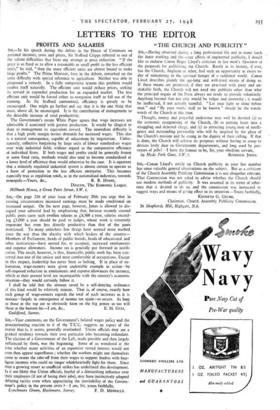 Page 15, 27 February 1948 — Sm,—Your comments on the Government's belated wages policy and the
Close

Sm,—Your comments on the Government's belated wages policy and the

procrastinating reaction to it of the T.U.C. suggests an aspect of the matter that is, it seems, generally overlooked. Union officials may see a gradual tendency towards their own particular jobs becoming redundant. The election of a Government of the Left, made possible and then largely influenced. by them, was the beginning. Some of us wondered at the time whether many activities of an expensive vested interest would not even then appear superfluous ; whether the workers might not themselves come to resent the rake-off from their wages to support leaders with four- figure incomes who could no longer wholeheartedly fight for them. Since then a growing resort to unofficial strikes has underlined this development. Is it not likely that Union officials, fearful of a diminishing influence over their employers (if not of losing their jobs), may have instinctively adopted delaying tactics even when appreciating the inevitability of the Govern- ment's policy in the present crisis ?—I am, Sir, yours faithfully, Lynchmere Green, Haslernere. Surrey. F. D. MERRALLS.