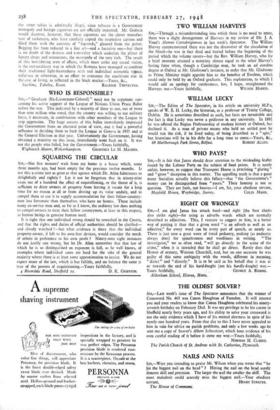 Sta,—The Editor of The Spectator, in his article on university M.P.s, speaks of W. E. H. Lecky, the historian, as a professor of Trinity College, Dublin. He is sometimes described as such, but facts are inexorable and the fact is that Lecky was never a professor in any university. In 1892 he was offered the Regius Professorship of modern history at Oxford, but declined it. As a man of private means who held no settled post he would run the risk, if he lived today, of being described as a " spiv," but historians will be in his debt for a long time to come.—Yours, &c., 69 Marlborough Park Street, Belfast. ROBERT ALLEN.