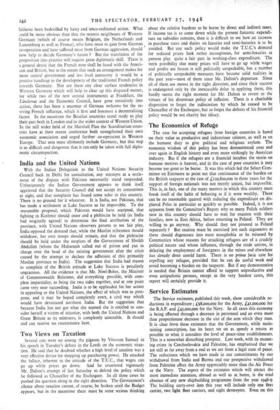 Several cats were set among the pigeons by Viscount Samuel in his speech in Tuesday's debate in the Lords on the economic situa- tion. He said that he doubted whether a high level of taxation was a very effective device for mopping up purchasing power. He attacked the fallacy, inherent in the attitude of the T.U.C., that wages can go up while prices go down. And he countered vigorously Mr. Dalton's attempt of last Saturday to defend the policy which he followed as Chancellor of the Exchequer. In all three cases he pushed the question along in the right direction. The Government's silence about taxation cannot, of course, be broken until the Budget appears, but in the meantime there must be some serious thinking about the relative burdens to be borne by direct and indirect taxes. If income tax is to come down while the present fantastic expendi- ture on subsidies remains, then it is difficult to see how an increase in purchase taxes and duties on luxuries and semi-luxuries is to be avoided. But any such policy would make the T.U.C.'s demand for reduced prices look rather incongruous, for semi-luxuries at present play quite a fair part in working-class expenditure. The stern possibility that many prices will have to go up while wages and profits are frozen is still politically unspeakable, but a number of politically unspeakable measures have become solid realities in the past year—most of them since Mr. Dalton's departure. Since all of them are moves in the right direction, and since their success is endangered only by the inexcusable delay in applying them, this hardly seems the right moment for Mr. Dalton to revert to the virtues of his disastrous policy of inflation. There is a charitable disposition to forget the indiscretion by which he ceased to be Chancellor of the Exchequer, but to forget the defects of his financial policy would be not charity but idiocy.