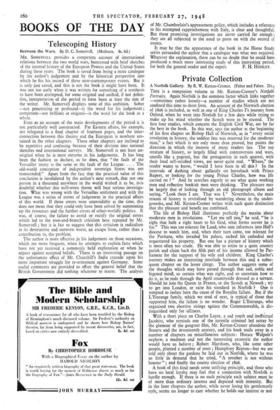 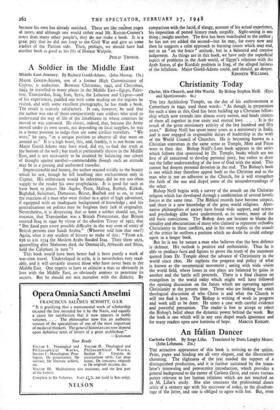 A Norfolk Gallery. By R. W. Ketton-Cremer. (Faber and Faber. 21s.) THIS is a companion volume to Mr. Ketton-Cremer's Norfolk Portraits. Again Norfolk is the common factor which links together —sometimes rather loosely—a number of studies which are not confined this time to short lives. An account of the Norwich election of 1806 is included, as well as one of King Charles I's journey from Oxford, when he went into Norfolk for a few days while trying to make up his mind whether the Scotch were to be trusted. The first four studies, which concern the English Civil War, are by far the best in the book. In this war, says the author at the beginning of his first chapter on Bishop Hall of Norwich, as in " every social revolution in history, the saddest fate was reserved for the moderate man," a fact which is not only more than proved, but points the direction in which the interest of many readers lies. The •top stratum of history, so largely filled with controversies and wars, unrolls like a pageant, but the protagonists in each quarrel, with their loud self-satisfied views, are never quite real. " Where," the reader wants to know, " would I have been in all this ? In the intervals of dashing about gallantly on horseback with Prince . Rupert, or looking for the yoUng Prince Charles, how was life carried on ? " And he searches eagerly to see what quiet working men and reflective bookish men were thinking. The pleasure may be largely that of looking through an old photograph album and saying, "Look there I am. That was I." Nevertheless, the main stream of history is revitalised by wandering about in the under- growths, and 1&. Ketton-Cremer writes with such quiet distinction that the pleasure and benefit are combined.

The life of Bishop Hall illustrates perfectly •the maxim about moderate men in revolutions. "Let me tell you," he said, "he is right that bath a right heart to his God, what forms soever he is for." This was too tolerant for Laud, who sent informers into Hall's diocese to watch him, and, when their turn came, too tolerant for the Puritans, who invaded his palace, sacked his cathedral and sequestered his property. But one has a picture of history which is most often too crude. He was able to retire to a quiet country parish and claim back the fifth part of his income allowed by Par- liament for the support of his wife and children. King Charles's journey makes an interesting interlude between this and a subse- quent chapter on the lesser clergy. The author suggests some of the thoughts which may have passed through that sad, noble and bigoted mini!, so certain what was right, and so uncertain how to do it, as he rode through the April countryside dressed as a servant. Should he join the Queen in France, or the Scotch at Newark ; try to get into London, or raise his standard in Norfolk ? One is tempted to isolate here the cause of the Royalist failure. But if the L'Estrange family, which we read of next, is typical of those that supported him, the failure is no wonder. Roger L'Estrange, who organised two abortive risings against the Commonwealth, is dis- tinguished only for silliness.

With a short piece on Charles Layer, a sad youth and ineffectual Jacobite, who reminds one of the juvenile criminal led astray by the glamour of the gangster film, Mr: Ketton-Cremer abandons the Stuarts and the Seventeenth century, and his book trails away in a number of chapters on miscellaneous subjects : Horace Walpole's nephew, a madman and not the interesting eccentric the author

would have us believe; Marsham, who, like some other people, planted a numbr of trees ; Humphrey Repton—but we are told only about the gardens he laid out in Norfolk, where he was so little in demand that he cried, " A prophet is not without honor= " ; and finally the county election of 1806.

A book of this kind needs some unifying principle, and those who have no local loyalty may feel that a connection with Norfolk is hardly enough. If there is no such principle each subject must be of more than ordinary interest and depicted with intensity. But in the later chapters the author, while never losing his gentlemanly style, seems no longer to care whether he holds our interest or not because his own has already vanished. These are like random pages of notes, and although one would rather read Mr. Ketton-Cremer's notes than many other people's, they do not make a book. It is a great pity that he did not keep to the Civil War and give us some studies of the Puritan side. Then, perhaps, we should have had another book as good as his life of Horace Walpole.