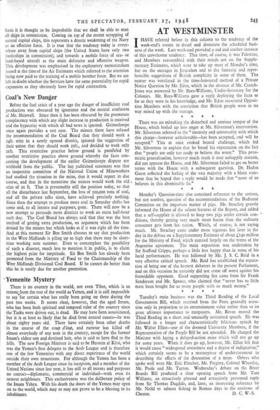 Before the fuel crisis of a year ago the danger of insufficient coal production was obscured by ignorance and the mental confusion of Mr. Shinwell. Since then it has been obscured by the premature complacency with which any slight increase in production is received and the hypocrisy with which all bad news is ignored. Grimethorpe once again provides a test case. The miners there have refused the recommendation of the Coal Board that they should work a 24ft. stint in a newly opened district, ignored the suggestion of their union that they should work 22ft., and decided to work only zift. This restrictive practice below ground is paralleled by another restrictive practice above ground whereby the facts con- cerning the development of the earlier Grimethorpe dispute are withheld from the public. The last published statement was that an inspection committee of the National Union of Mineworkers had studied the situation in the mine, that it would report in due course, and that in the meantime the miners would work the old • stint of 21 ft. That is presumably still the position today, so that all the disturbance last September, the loss of 500,000 tons of coal, and all the private talks since, have achieved precisely nothing. Since then the attempt to produce more coal in Saturday shifts has come and, to all intents and purposes, gone. There will now be a new attempt to persuade more districts to work an extra half-hour each day. The Coal Board has always said that that was the best method of getting extra production, an argument which has been denied by the miners but which looks as if it was right all the time. And at this moment Sir Ben Smith chooses to say that production in the West Midlands is piling up so high that there may be short- time working next summer. Even to contemplate the possibility of such a disaster, much less to mention it in public, is to claim the highest prize for ineptitude. Sir Ben Smith has already been promoted from the Ministry of Food to the Chairmanship of the West Midlands Divisional Coal Board. If he cannot do better than this he is surely due for another promotion.