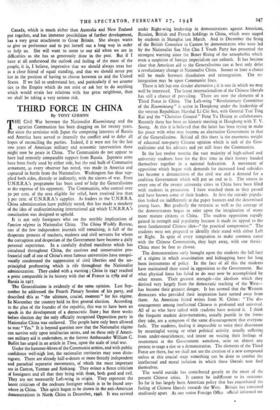 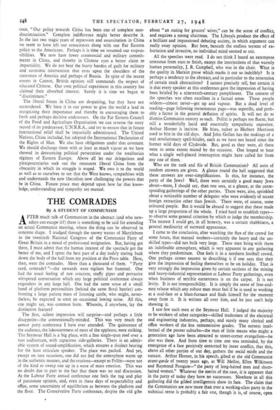 THE Civil War between the Nationalist Kuomintang and the agrarian Communists has been dragging on for twenty years. But since the armistice with Japan the competing interests of Russia and America have served to intensify the conflict and to defer all hopes of reconciling the parties. Indeed, if it were not for the last two years of American military and economic intervention there might now be peace in China. The Communists do not appear to have had remotely comparable support from Russia. Japanese arms have been freely used by either side, but the real bulk of Communist armament, as every observer has noted, was made in America and captured in battle from the Nationalists. Washington has thus sup- plied both sides, directly or indirectly, with the sinews of war. Even U.N.R.R.A.'s programme has been used to help the Generalissimo at the expense of his opponent. The Communists, who control over 5o per cent. of the area eligible for relief, have received less than 3 per cent. of U.N.R.R.A.'s supplies. As leaders in the U.N.R.R.A. China administration have publicly stated, this has made a mockery of the idea of undiscriminating international aid which U.N.R.R.A.'s constitution was designed to uphold.

It is not only foreigners who see the terrible implications of l'ancien regime in Nationalist China. The China Weekly Review, one of the few independent journals still remaining, is full of the desperate protests of teachers, students and civil servants for whom the corruption and despotism of the Government have become a daily personal experience. In a carefully drafted manifesto which has circulated throughout China, the cautious and conservative pro- fessorial staff of one of China's most famous universities have unequi- vocally condemned the suppression of civil liberties and the un- principled profiteering which is rife throughout the Nationalist administration. They ended with a warning ; China in 2947 reached a point comparable in its history with that of France in 1789 and of Russia in 1917.

The Generalissimo is evidently of the same opinion. Last Sep- tember he addressed the Fourth Plenary Session of his party, and described this as "the ultimate, crucial, moment" for his regime. In November the country held its first general election. According to the plan of the founder of the republic, this was to have been an epoch in the development of a democratic State ; but three weeks before election day the only officially recognised Opposition party in Nationalist China was outlawed. The people have only been allowed to vote " Yes." It is beyond question now that the Nationalist regime can survive only upon totalitarian terms, and on these only if Ameri- can military aid is undertaken, as the former Ambassador William C. Bullitt has urged in an article in Time, upon the scale of total war.

Under the hammer-blows of the Communist armies, and with public confidence well-nigh lost, the nationalist territories may soon disin- tegrate. There are already half-a-dozen or more fiercely independent and parochial separatist movements, of which the most important are in Canton, Yunnan and Sinkiang. They evince a fierce criticism of foreigners and all that they bring with them, both good and evil. They are not necessarily Left-wing in origin. They represent the latent criticism of the cocksure foreigner which is to be found any- where in China. This spirit began to be shown in the anti-American demonstrations in North China in December, 1946. It was revived under Right-wing leadership in demonstrations against American, Russian, British and French holdings in China, which were staged by students in Shanghai last March. And in December the firing of the British Consulate in Canton by demonstrators who were led by the Nationalist San Min Chu I Youth Party has presented the strongest warning since the Boxer Rising of the xenophobia which even a suspicion of foreign imperialism can unleash. It has become clear that American aid to the Generalissimo can at best only defer a revolutionary change in Nationalist China. Sooner or later a choice will be made between dissolution and reintegration. The re- integration may be upon Communist lines.

There is left but one slender alternative ; it is one in which we may well be interested. The latent internationalism of the Chinese liberals has still a chance of prevailing. There are now the elements of a Third Force in China. The Left-wing " Revolutionary Committee of the Kuomintang" is active in Hongkong under the leadership of the veteran Republican Marshal Li Chi Sen, with General Tsai Ting Kai and the "Christian General " Feng Yu Hsiang as collaborators. Recently there has been an historic meeting in Hongkong with T. V. Soong. At this it is believed that the latter has been trying to make his peace with what may become an alternative Government to that of the Generalissimo. Behind all this there is the enormous weight of educated non-party Chinese opinion which is sick of the Gen- eralissimo and his advisers and yet still fears the Communists.

In the last twelve months the vast majority of high-school and university students have for the first time in their history banded themselves together in a national federation. A movement of opposition which began with demands for increased food subsidies has become a denunciation of the civil war and a demand for a coalition Government which will put an end to it. The streets in every one of the twenty university cities in China have been filled with students in procession. I have watched them as they passed and have known some of their leaders. At first the outside popula- tion looked on indifferently at the paper banners and the determined young faces. But gradually the restraint as well as the courage of the demonstrators began to seize upon the imagination of many more mature citizens in China. The student opposition rapidly gained in strength and popularity because it made its appeal to the most fundamental Chinese ided—" the practical compromise." The students were not prepared to identify their stand with either Left or Right. In spite of every temptation to make common cause with the Chinese Communists, they kept away, with one thesis: China must be free to choose.

The demonstrations early brought upon the students the full fury of a regime in which assassination and kidnapping have for long been instruments of policy. In the face of all this the students have maintained their stand in opposition to the Government. But what physical force has failed to do may now be accomplished by other means. Their greatest strength—the idealism which they derived very largely from the democratic teaching of the West— has become their greatest danger. It has seemed that the Western democrats who provided their inspiration have turned away from them. An American friend writes from N. China : " The dis- couragement among intellectual Chinese is profound and universal. All of us who have talked with students have noticed it. I think the frequent student demonstrations, usually puerile in the forms they take, are a symptom of the same discouragement that everyone feels. The students, finding it impossible to voice their discontent by meaningful voting or other political activity, usually suffering from under-nourishment, and intent on voicing their feelings of resentment at the Government somehow, seize on almost any pretext to stage a riot or a demonstration. The elements of the Third Force are there, but we shall not see the creation of a new compound unless at this crucial stage something can be done to combat the intellectual and moral isolation in which these liberals now find themselves.

The world outside has contributed greatly to the onset of the present Chinese crisis. It cannot be indifferent to its outcome. So far it has largely been American policy that has exacerbated the feeling of Chinese liberals towards the West. Britain has remained studiously apart. As one senior Foreign Office official informed me once, " Our policy towards China has been one of complete non- discrimination." Complete indifference might better describe it. In the last two tragic years of repression and assassination in China we seem to have left our consciences along with our Far Eastern policy to the Americans. Perhaps it is time we resumed our respon- sibilities. We now have fewer commercial and military commit- ments in China, and thereby in Chinese eyes a better claim to impartiality. We do not bear the heavy burden of guilt for military and economic intervention that rests upon the shoulders of the statesmen of America and perhaps of Russia. In spite of the recent events in Canton, British opinion still commands the respect of educated Chinese. Our own political experiment in this country has claimed their absorbed interest. Surely it is time we began to " discriminate."

The liberal forces in China are despairing, but they have not surrendered. We have it in our power to give the world a lead in recognising their importance and thereby in encouraging them to fresh and perhaps decisive endeavours. On the Far Eastern Council of the Food and Agriculture Organisation we can reverse the story record of its predecessor, U.N.R.R.A., and try to ensure that in future international relief shall be impartially administered. The United Nations, China included, has adopted the International Declaration of the Rights of Man. We also have obligations under that covenant. We should discharge them with at least as much vigour as we have showed in denouncing political persecution under the totalitarian regimes of Eastern Europe. Above all let our delegations and plenipotentiaries seek out the renascent liberal China from the obscurity in which its struggle is waged. We owe it to the world as well as to ourselves to see that the West knows, sympathises with and understands the new liberalism now challenging the powers that be in China. Future peace may depend upon how far that know- ledge, understanding and sympathy are mutual.