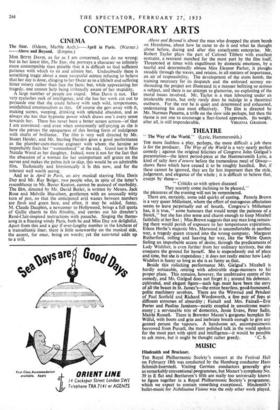 " The Way of the World." (Lyric, Hammersmith.) THE more faultless a play, perhaps, the more difficult a job there is for the producer. The Way of the World is a very nearly perfect comedy ; against the original felicities of Congreve John Gielgud's presentation—the latest period-piece at the Hammersmith Lyric, a kind of salty hors d'oeuvre before the tremendous meal of Otway- shows flaws which have caused it to be roughly handled. But, if these cannot be ignored, they are far lets important than the style, judgement, and elegance of the whole ; it is difficult to believe that, except by those- " Criticks so with spleen diseased They scarcely come inclining to be pleased," the pleasures of the evening will not be remembered.

There are, certainly, some odd quirks of casting. Pamela Brown is a very queer Millamant, whom the effort of outrageous affectation seems to leave perpetually out of breath. Congreve's Millamant has, it is true, " some humours that would tempt the patience of a Stoicic," but she has also sense and charm enough to keep Mirabell faithfully at her feet ; Miss Brown suggests that any man long remain- ing there would perish of exposure to her tempestuous expirations. Eileen Herlie's majestic Mrs. Marwood is uncomfortable in another way, a tragedy queen strayed into the wrong company. Margaret Rutherford, rolling and heaving her way, like the White Queen feeling an improbable access of desire, through the predicaments of Lady Wishfort, is even further from her ordinary territory, but she conquers the ground for. herself. She is stupendously out of place and time, but she is stupendous ; it does not really matter how Lady Wishfort is funny so long as she is as funny as that.

Beside this rollicking performance Mr. Gielgud's Mirabell is hardly noticeable, retiring with admirable stage-manners to his proper place. This remains, however, the unobtrusive centre of the comedy, and Mr. Gielgud does not forget it ; around his debonair, cuhivated, and elegant figure—such legs must have been the envy of all the beaux in St. James's—the entire heartless, good-humoured, polite machinery revolves. There are the Witwoud and Petulant of Paul Scofield and Richard Wordsworth, a fine pair of fops at different extremes of absurdity ; Fainall and Mrs. Fainall—Erie Porter and Pauline Jameson—neatly coupled in unwelcome matri- mony ; a serviceable trio of domestics, Jessie Evans, Peter Sallis, Mairhi Russell. There is Brewster Mason's gorgeous bumpkin Sir Wilful, with boots and grin and inebriate breath enough to give any genteel person the vapours. A handsome set, accompaniments borrowed from Purcell, the most polished talk in the world spoken for the most part with spirit and intelligence—it would be possible to ask more, but it might be thought, rather greedy. ' C. S.