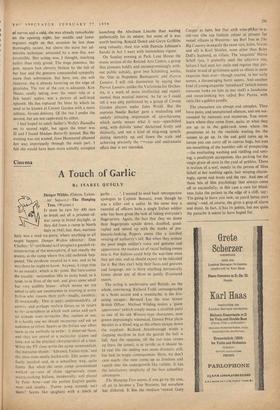 A Touch of Garlic

Danger Within. (Odeon, Leices- ter Square.)—The Hanging Tree. (Warner.) IT must be rare for 400 men to break out of a prisoner-of- war camp in broad daylight, as they did from a camp in North Italy in 1943; but, then, wartime Italy was a mad tea-party, where anything at all might happen. Danger Within (director : Don Chatfey; 'U' certificate) is (I imagine) a goodish re- construction of the atmosphere, if not exactly the events, in the camp where this odd outbreak hap- pened. The producer assured us it was. and as he was there he ought to know. Anyway, it rings true to an outsider, which is the point. But here cornes the trouble: nationalism lifts its nasty head, as it tends to in films of the sort. and gives some small but very audible hisses : which means we are asked to join our countrymen in sneering at every It iliin who crosses their path—loudly, unsubtly, ill.menneredly. This is quite understandable, of cours:. and .perhaps realism forces us to return to th- atmosphere in which such antics and such an Attitude were in.witable. But, realism or not. it is hardly one we should encouraee and ask an audience to relive. Sneers at the Italian war effort seem to me perfectly in order: it deserved them, and they are aimed at a particular system and time. not at the physical characteristic§ of a race. When the PT class meets the camp commandant. the instructor shouts: 'Advance. Italian style,' and the class trots neatly backwards. This seems per- fectly jUstified and, in a• schoolboy. way, quite funny. But when the same camp commandant walked up—one of those aggressively clean. ascetic-looking Italians, incidentally, well played by Peter Arne—and the perfect English gentle- man said loudly : 'Funny pang around, isn't there? Seems like spaghetti with a touch of garlic . . . I wanted to send back retrospective apologies to Captain Benucci. even though he was a killer and a sadist. In the same way a roomful of officers baits a single Italian soldier who has. been given the task of taking everyone's fingerprints. Again, the fact that they set down their fingerprints upside down, doubled, quad- rupled and mixed up with the marks of pre- historic-looking flippers seems like a justified twisting of authority's tail. But when they imitate the poor single soldier's voice and gestures and appearance, the nastiest air of racial baiting comes into it. For Italians could help the war-time mess they got into, and so should expect to be ridiculed for it. But they can't help their faces and gestures and language, nor is there anything intrinsically funny about any of them to justify ill-natured sneers.

The acting is unobtrusive and British; on the whole, convincing. Richard Todd, unrecognisable in a Scots accent and a moustache, is the fire- eating escaper; Bernard Lee the wise Senior British Officer. Michael Wilding makes a 'guest appearance' (which simply means a smallish part) as one of his old Wimsey-type characters, now grown depressingly whimsical. Dennis Price plays Hamlet in a blond wig as the others escape down the trapdoor. Richard Attenborough winds a clapping machine to fool the guards the hall is full. And the suspense, till the last man conies up from the tunnel, is as terrific as it should be. In real life the ending was more dramatic still, but had its -tragic consequences. Here, we don't care much—the men come up to freedom and vanish into the undergrowth like rabbits. It has the satisfactory simplicity of the best schoolboy adventures.

The Hanging Tree seems, if you go by the cast, all set to become a Top Western; but somehow has slithered. It has the medium I Towed Gary Cooper as hero, but that arch nose-picker-in-a- red-vest (the top fashion colour at present for vested villains in Westerns: see Burl Ives in The Big Country in exactly the same vest, holes, braces and all) is Karl Malden, none other than Baby Doll's husband, as villain. The 'exquisite' Maria Schell (yes, I probably used the adjective too, before I had seen her smile and register that par- ticular brand of girlishness quite so often) is more exquisite than ever—though roasted, in her early scenes, a discouraging burnt sienna. And another kind of young exquisite 'introduced' (which means someone looks on him as star stuff) a handsome and mean-looking boy called Ben Piazza, with curls like a golden poodle.

The characters are abrupt and complex. They have pasts, and unexplained silences, and are sur- rounded by rumours and mysteries. You never learn where they come from, quite, or what they are up to in the gold-rush town where the prostitutes sit by the roadside waiting for the saloon to go up. In the end gold turns up in lumps you can carry off in canvas bags, but you see something of the humbler side of prospecting —the everlasting washing and riddling and sort- ing, a poultryish occupation, like pecking for the single grain of corn in the yard of pebbles. There is realism of a sort, mostly in the person of Miss Schell at her washing again, hair wisping charm- ingly, apron and boots and the rest. And one of those bits of film psychology that always come off so successfully; in this case a cure for blind- ness (take the patient to the edge of a cliff; say: `I'm going to leave you now, so you'd better start seeing'—and, of course, she gives a gasp of alarm and does). In fact, it has its points, but not quite the panache it seems 'to have hoped for.