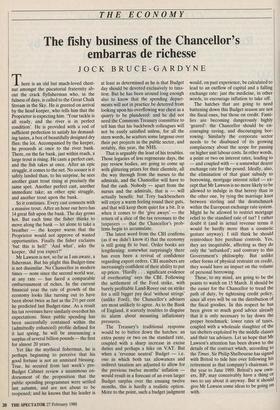 The fishy business of the Chancellor's embarras de richesse

There is an old but much-loved chest- nut amongst the piscatorial fraternity ab- out the crack flyfisherman who, in the fulness of days, is called to the Great Chalk Stream in the Sky. He is greeted on arrival by the head keeper, who tells him that the Proprietor is expecting him. 'Your tackle is all ready, and the river is in perfect condition'. He is provided with a rod of sufficient perfection to satisfy his demand- ing tastes, a box of beautifully designed dry flies: the lot. Accompanied by the keeper, he proceeds at once to the river bank. There, on the far bank, just within reach, a large trout is rising. He casts a perfect cast, and the fish takes at once. After an epic struggle, it comes to the net. No sooner is it safely landed than, to his surprise, he sees another giant trout rising at precisely the same spot. Another perfect cast, another immediate take; an other epic struggle, and another trout upon the bank.

So it continues. Every cast connects with a massive trout. After an hour our hero has 14 great fish upon the bank. The day grows hot. But each time the fisher thinks to move along the bank — let alone to take a breather — the keeper warns that the Proprietor would not approve of wasted opportunities. Finally the fisher exclaims `but this is hell!' And what', asks the keeper, 'did you expect?'

Mr Lawson is not, so far as I am aware, a fisherman. But his plight this Budget-time is not dissimilar. No Chancellor in modern times — none since the second world war, at any rate — has faced a comparable embarrassment of riches. In the current financial year the rate of growth of the economy looks like turning out to have been about twice as fast as the 21/2 per cent he predicted last Budget-time. As a result his tax revenues have similarly overshot his expectations. Since public spending has been successfully contained within the (admittedly enhanced) profile defined for it last spring, he will be announcing a surplus of several billion pounds — the first for almost 20 years.

Yet like the mythical fisherman, he is perhaps beginning to perceive that his good fortune is not an unmixed blessing. True, he secured from last week's pre- Budget Cabinet review a unanimous en- dorsement of the proposition that the public spending programmes were settled last autumn, and are not about to be reopened; and he knows that his leader is at least as determined as he is that Budget day should be devoted exclusively to taxa- tion. But he has been around long enough also to know that the spending depart- ments will not in practice be deterred from looking upon his overflowing war chest as a quarry to be plundered: and he did not need the Commons Treasury committee to tell him that his backbench colleagues will not be easily satisfied unless, for all the stern words, he scatters some largesse over their pet projects in the public sector, and notably, this year, the NHS.

That is arguably the least of his troubles. Those legacies of less regenerate days, the pay review bodies, are going to come up with glittering prizes for their clientele, all the way through from the nurses to the admirals, and the Chancellor will have to find the cash. Nobody — apart from the nurses and the admirals, that is — will actually benefit: but Tory backbenchers will enjoy a warm feeling round their guts, and that will keep them quiet for a bit. It is when it comes to the 'give aways' — the return of a slice of the tax revenues to the taxpayers — that the Chancellor's prob- lems begin to accumulate.

The latest word from the CBI confirms (as if we didn't know it) that the economy is still going fit to bust. Order books are lengthening: somewhat surprisingly there has even been a revival of confidence regarding export orders. CBI members are increasingly confident of their ability to put up prices. 'Hardly . . . significant evidence of overheating' says the CBI. Following the settlement of the Ford strike, with barely profitable Land-Rover out on strike for a still bigger pay deal 'without strings' (unlike Ford), the Chancellor's advisers are most unlikely to agree. As to the Bank of England, it scarcely troubles to disguise its alarm about mounting inflationary pressures.

The Treasury's traditional response would be to batten down the hatches: an extra penny or two on the standard rate, coupled with a sharp increase in excise duties and perhaps a hike on VAT. But when a 'revenue neutral' Budget — i.e. one in which both tax allowances and indirect taxation are adjusted to allow for the previous twelve months' inflation would result in a forecast of an even larger Budget surplus over the ensuing twelve months, this is hardly a realistic option. Mire to the point, such a budget judgment would, on past experience, be calculated to lead to an outflow of capital and a falling exchange rate: just the medicine, in other words, to encourage inflation to take off.

The hatches that are going to need battening down this Budget season are not the fiscal ones, but those on credit. Fami- lies are becoming dangerously highly `geared': the Chancellor should be en- couraging saving, and discouraging bor- rowing. Similarly the corporate sector needs to be disabused of its growing complacency about the scope for passing on higher unit labour costs. In other words, a point or two on interest rates, leading to — and coupled with — a somewhat dearer exchange rate for the pound. Ideally, also, the elimination of that giant subsidy to borrowing, mortgage interest relief — ex- cept that Mr Lawson is no more likely to be allowed to indulge in that heresy than in the other one, by tying the marriage knot between sterling and the deutschmark within the European exchange rate system. Might he be allowed to restrict mortgage relief to the standard rate of tax? I rather doubt it (and in actual revenue terms it would be hardly more than a cosmetic gesture anyway). I still think he should reintroduce hire purchase controls. Yes, they are inequitable, affecting as they do only the `unbanked'; and contrary to this Government's philosophy. But unlike other forms of physical restraint on credit, they would have an impact on the volume of personal borrowing.

These, to my mind, are going to be the points to watch on 15 March. It should be the easier for the Chancellor to tread the path of duty, by tightening credit policy, since all eyes will be on the distribution of the fiscal goodies. In this respect he has been given so much good advice already that it is only necessary to lay down the proper benchmark: lower rates of taxes, coupled with a wholesale slaughter of the tax shelters exploited by the middle classes and their tax advisers. Let us hope that Mr Lawson's attention has been drawn to the details of the contract which, according to the Times, Sir Philip Shelboume has signed with Britoil to tide him over following his retirement as that company's chairman, in the year to June 1989. Britoil's new own- ers, BP, may conceivably have a thing or two to say about it anyway. But it should give Mr Lawson some ideas to be going on with.