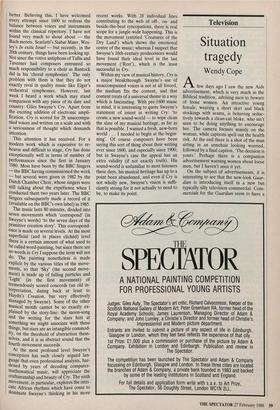 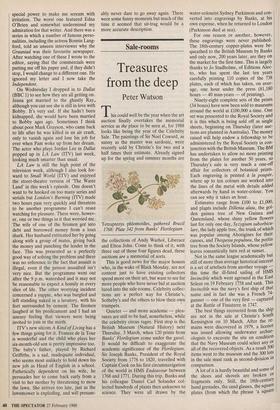 Afew days ago I saw the new Aids advertisement, which is very much in the Biblical tradition, advising men to beware of loose women. An attractive young female, wearing a short skirt and black stockings with seams, is behaving seduc- tively towards a clean-cut bloke, who isn't seen to be doing anything to encourage her. The camera focuses mainly on the woman, while captions spell out the health risk. At the end there is a shot of the man sitting in an armchair looking worried, followed by a final caption, 'The decision is yours.' Perhaps there is a companion advertisement warning women about loose men, but I haven't seen it yet.

On the subject of advertisements, it is interesting to see that the new-look Guar- dian is introducing itself in a new but typically silly television commercial. Com- mercials for the Guardian seem to have a special power to make me scream with irritation. The worst one featured Edna O'Brien and somewhat undermined my admiration for that writer. And there was a series in which a number of famous perso- nalities, including the actress Bonnie Lang- ford, told an unseen interviewer why the Grauniad was their favourite newspaper. After watching one of these I wrote to the editor, saying that the commercials were putting me off his paper and, if they didn't stop, I would change to a different one. He ignored my letter and I now take the Independent.

On Wednesday I dropped in to Dallas (BBC 1) to see how they are all getting on. Jenna got married to the ghastly Ray„ although you can see she is still in love with Bobby. It's very sad. If she hadn't been kidnapped, she would have been married to Bobby ages ago. Sometimes I think about poor Mark Grayson, who came back to life after he was killed in an air crash, only to vanish again and lose his job for ever when Pam woke up from her dream. The actor who plays Jordan Lee in Dallas popped up in LA Law (ITV) last week, looking much smarter than usual.

LA Law is still the high point of the television week, although I also look for- ward to Small World (ITV) and enjoyed the street-theatre version of 'The Waste Land' in this week's episode. One doesn't want to be hooked on too many series and serials but London's Burning (ITV) made two hours pass very quickly and threatens to be another programme I can't resist watching for pleasure. There were, howev- er, one or two things in it that worried me. The wife of one of the firemen got into debt and borrowed money from a loan shark. Her husband extricated her by going along with a group of mates, giving back the money and punching the lender in the face. This was presented as a perfectly good way of solving the problem and there was no reference to the fact that assault is illegal, even if the person assaulted isn't very nice. But the programme went out after the 9 p.m. watershed and it may not be reasonable to expect a homily in every slice of life. The other worrying incident concerned a yuppie, who was burgled and left standing naked in a lavatory, with his feet surrounded by cement. The firemen laughed at his predicament and I had an uneasy feeling that viewers were being invited to join in the mirth.

ITV's new sitcom A Kind of Living has a few things going for it. Frances de la Tour is wonderful and the child who plays her six-month-old son is pretty impressive too. The baby's father, played by Richard Griffiths, is a sad, inadequate individual, who seems most unlikely to hold down his new job as Head of English in a school. Pathetically dependent on his wife, he persuades her to come back early from a visit to her mother by threatening to mow the lawn. She arrives too late, just as the lawnmower is exploding, and will presum- ably never dare to go away again. There were some funny moments but much of the time it seemed that sit-trag would be a more accurate description.