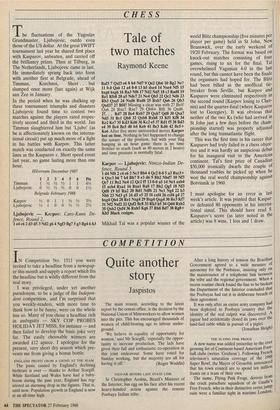 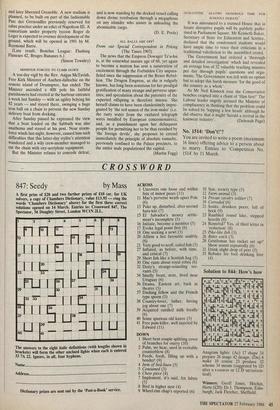 IN Competition No. 1511 you were invited to take a headline from a newspap- er this month and supply a report which fits the headline but is wildly different from the real story.

I was privileged, under yet another pseudonym, to be a judge of the Indepen- dent competition, and I'm surprised that you weekly-readers, with more time to think how to be funny, were on the whole less so. Many of you chose a headline rich in ambiguity — SKY COP PROBES HOLIDAY JET MISS, for instance — and then failed to develop the basic joke very far. The easily choosable winners are awarded £12 apiece. I apologise for the present, very short dry season which pre- vents me from giving a bonus bottle.

ENGLAND PROFIT FROM A GRIND AT THE SEAM

The panic caused by England's declining birthrate is over — thanks to Arthur Scargill. While Scotland and Wales have had a baby- boom during the past year, England has reg- istered an alarming drop in the figures. That is, until now. Population growth in England is now at an all-time high. The main reason, according to the latest report by the census office, is the decision by the National Union of Mineworkers to allow women into the pits. This has encouraged thousands of women of child-bearing age to labour under- ground.

'We believe in equality of opportunity for women,' said Mr Scargill, 'especially the oppor- tunity to increase production. The lads have given their full and enthusiastic co-operation in this joint endeavour. Some have voted for Sunday working, but the majority are all for having it off.' (Roger Woddis)

Sr Christopher Arobin, Brazil's Minister of the Interior, has egg on his face after his recent heavy-handed action against the remote Poobaya Indian tribe. After a long history of tension the Brazilian Government agreed to a wide measure of autonomy for the Poobayas, insisting only on the maintenance of a telephonic link between the tribe and the regional government. When a recent routine check found the line to be broken the Department of the Interior concluded that the Poobayas had cut it in deliberate breach of their agreement. It was only after an entire army company had been deployed to Poobaya country that the identity of the real culprit was discovered. A jaguar had accidentally closed its jaws over the land-laid cable while in pursuit of a piglet. (Jonathan Sleigh)

A new name was added yesterday to the ever growing list of Continent-based American Foot- ball clubs (writes 'Gridiron). Following French television's saturation coverage of the 1988 Super Bowl, the Mayor of Grenoble announced that his town council are to spend ten million francs on a team of their own.

The name, Flying Pink Frogs, derives from the crack parachute squadron of de Gaulle 's Free French, who in their distinctive cerise jump suits were a familiar sight in wartime London,

and later liberated Grenoble. A new stadium is planned, to be built on part of the fashionable Parc des Grenouilles previously reserved for sabre practice under an edict of Napoleon HI. A consortium under property tycoon Roger de Loger is expected to oversee development of the ground, which will be opened in 1991 by M. Raymond Barre.

MINISTER FORCED TO CLIMB DOWN

A ten-day vigil by the Rev. Angus McTavish, Free Kirk Minister of Auchen-dallochie on the remote island of Drumspree, has ended. The Minister ascended a 40ft pole his faithful parishioners had erected at the harbour entrance a week last Sunday — with an agility belying his 82 years — and stayed there, swinging a huge iron ball on a chain to prevent the new Sunday delivery boat from docking.

After Sunday passed he expressed the view that a boat loaded on the Sabbath was also anathema and stayed at his post. Near storm- force winds last night, however, caused him such difficulties that this latter-day stylite's attention wandered and a wily crew-member managed to cut the chain with oxy-acetylene equipment. But the Minister refuses to concede defeat, and is now standing by the docked vessel calling down divine retribution through a megaphone on any islander who assists in unloading the abominable cargo.

ALL BALLS ARE OFF!

From our Special Correspondent in Peking (The Times 1903) The news that the Empress Dowager Tz'u-hsi is, at the somewhat mature age of 68, yet again to become a matron has sent a susurration of excitement through the Forbidden City unpara- lleled since the suppression of the Boxer Rebel- lion. The Dragon Empress, as she is vulgarly known, has long been notorious for her prodigal gratification of many strange and perverse appe- tites; and speculatibn about the paternity of the expected offspring is therefore intense. She herself claims to have been clandestintly impre- gnated by 'the red semen of the iron snake' (i.e. the rusty water from the oxidated telegraph wires installed by European concessionaires); and, as a punishment upon her delinquent people for permitting her to be thus ravished by 'the foreign devils', she proposes to extend immediately the principle of absolute eunuchy, previously confined to the Palace precincts, to the entire male populationof the capital.. .

It was announced to a stunned House that in future disruptive pupils will be publicly guillo- tined in Parliament Square. Mr Kenneth Baker, Secretary of State for Education and Science, declared that the condemned students would have ample time to voice their criticisms in a traditional valediction to the assembled crowd.

The Government had ordered a 'thorough and detailed investigation' which had revealed an average loss of 32 valuable teaching minutes per day through pupils' questions and argu- ments. The Government was left with no option but to adopt this harsh measure 'for the good of the country as a whole'.

As Mr Neil Kinnock rose the Conservative benches erupted into a chant of 'Him first!' The Labour leader angrily accused the Minister of complacency in thinking that the problem could be solved by 'lopping a few heads' although he did observe that it might 'herald a revival in the