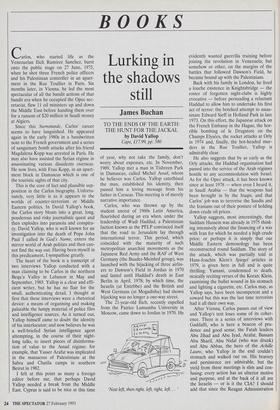 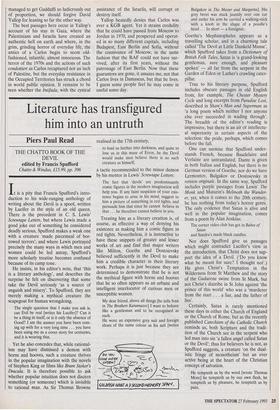 Lurking in the shadows still

TO THE ENDS OF THE EARTH: THE HUNT FOR THE JACKAL by David Yallop Cape, f17.99, pp. 580 Carlos, who started life as the Venezuelan Ilich Ramirez Sanchez, burst onto the public stage on 27 June, 1975, when he shot three French police officers and his Palestinian controller in an apart- ment in the Rue Toullier in Paris. Six months later, in Vienna, he led the most spectacular of all the bandit actions of that bandit era when he occupied the Opec sec- retariat, flew 11 oil ministers up and down the Middle East before handing them over for a ransom of $20 million in Saudi money at Algiers.

Since this Stemstunde, Carlos' career seems to have languished. He appeared again in the early 1980s in a handwritten note to the French government and a series of sanguinary bomb attacks after his friend Magdalena Kopp was arrested in Paris. He may also have assisted the Syrian regime in assassinating various dissidents overseas. He now lives, with Frau Kopp, in an apart- ment block in Damascus which is one of the touristic sights of that city.

This is the core of fact and plausible sup- position in the Carlos biography. Unfortu- nately, very little is as it appears in the worlds of counter-terrorism or Middle Eastern politics. In David Yallop's book, the Carlos story bloats into a great, long, ponderous and risky journalistic quest and then explodes into paranoia and conspira- cy. David Yallop, who is well known for an investigation into the death of Pope John Paul I called In God's Name, enters the mirror world of Arab politics and then can- not find the way out. Having been myself in this predicament, I sympathise greatly.

The heart of the book is a transcript of two interviews Yallop conducted with a man claiming to be Carlos in the northern Beqa'a Valley in Lebanon in May and September, 1985. Yallop is a clear and effi- cient writer, but he has no flair for the small, authenticating detail. I thought at first that these interviews were a rhetorical device: a means of organising and making palatable the lumpy material of police files and intelligence sources. As it turned out, Yallop himself came to doubt the identity of his interlocutor; and now believes he was a well-briefed Syrian intelligence agent attempting, in the course of their night- long talks, to insert pieces of disinforma- tion of value to the Assad regime: for example, that Yasser Arafat was implicated in the massacres of Palestinians at the Sabra and Chatila camps in southern Beirut in 1982.

I felt at this point as many a foreign editor before me, that perhaps David Yallop needed a break from the Middle East. Cyprus is said to be nice at this time of year, why not take the family, don't worry about expenses, etc. In November, 1989, Yallop met a man in Tishreen Park in Damascus, called Michel Assaf, whom he believes was Carlos. Yallop cateChised the man, established his identity, then passed him a loving message from his father in Caracas. This meeting is of merely narrative importance.

Carlos, who was thrown up by the student unrest of 1960s Latin America, flourished during an era when, under the leadership of Wadi Haddad, a Palestinian faction known as the PFLP convinced itself that the road to Jerusalem lay through international terror. This period, which coincided with the maturity of such metropolitan anarchist movements as the Japanese Red Army and the RAF of West Germany (the Baader-Meinhof group), was launched with the hijacking of three airlin- ers to Dawson's Field in Jordan in 1970 and lasted until Haddad's death in East Berlin in April, 1978; by which time, the Israelis (at Entebbe) and the British and West Germans (at Mogadishu) had shown hijacking was no longer a one-way street.

The 21-year-old Ilich, recently expelled from the Patrice Lumumba University in Moscow, came down to Jordan in 1970. He Next left, then right, left, right, left. . . ' evidently wanted guerrilla training before joining the revolution in Venezuela; but somehow or other, on the margins of the battles that followed Dawson's Field, he became bound up with the Palestinians.

Back with his family in London, he lived a louche existence in Knightsbridge — the roster of forgotten night-clubs is highly evocative — before persuading a reluctant Haddad to allow him to undertake his first act of terror: the botched attempt to assas- sinate Edward Sieff in Holland Park in late 1973. On this effort, the Japanese attack on the French Embassy in the Hague, the hor- rible bombing of le Drugstore on the Champs Elysees, the rocket attacks at Orly in 1974 and, finally, the hot-headed mur- ders in the Rue Toullier, Yallop is admirably clear.

He also suggests that by as early as the Orly attacks, the Haddad organisation had passed into the service of the Arab regimes hostile to any accommodation with Israel. As for the Opec attack, it has been known since at least 1978 — when even I heard it, in Saudi Arabia — that the weapons had been brought in by the Iraqis; and that Carlos' job was to terrorise the Saudis and the Iranians out of their posture of holding down crude oil prices.

Yallop suggests, most interestingly, that Saddam Hussein was already in 1975 think- ing intensively about the financing of a war with Iran for which he needed a high crude price; or perhaps it is simply that our Middle Eastern demonology has been reconstructed round Saddam. The story of the attack, which was partially told in Hans-Joachin Klein's Spiegel articles in 1979, is given here in full and is quite thrilling: Yamani, condemned to death, stoically reciting verses of the Koran; Klein, examining the bullet wound in his stomach and lighting a cigarette, etc. Carlos may, as Yallop says, have been incompetent and a coward but this was the last time terrorists had it all their own way.

After Vienna, Carlos passes out of view and Yallop's text loses some of its coher- ence. There is a series of interviews with Gaddaffi, who is here a beacon of pru- dence and good sense; the Fatah leaders Abu Jihad and Abu lyad, Arafat, Bassam Abu Sharif, Abu Nidal (who was drunk) and Abu Abbas, the hero of the Achille Lauro, who Yallop in the end couldn't stomach and walked out on. His bravery 0 and persistence are admirable, but the

yield from these meetings is slim and con- fusing: every action has an ulterior motive and purpose, and at the back of it all are

the Israelis — or is it the CIA? I should

add that since the Reagan Administration managed to get Gaddaffi so ludicrously out of proportion, we should forgive David Yallop for leaning so far the other way.

The best passages here occur in Yallop's account of his stay in Gaza, where the Palestinians and Israelis have created an authentic hell on earth and where, in the grim, grinding horror of everyday life, the antics of a Carlos begin to seem old- fashioned, infantile, almost innocuous. The terror of the 1970s and the actions of such condottieri as Carlos recaptured not an inch of Palestine, but the everyday resistance in the Occupied Territories has struck a chord in world public opinion. It remains to be seen whether the Intifada, with the cynical

assistance of the Israelis, will corrupt or destroy itself.

Yallop heatedly denies that Carlos was ever a KGB agent. Yet it strains credulity that he could have passed from Moscow to Jordan in 1970, and prospered and operat- ed in so many different capitals, including Budapest, East Berlin and Sofia, without the connivance of Moscow; in the same fashion that the RAF could not have sur- vived, after its first years, without the patronage of East Berlin. Now that these guarantors are gone, it amazes me, not that Carlos lives in Damascus, but that he lives. I guess some people feel he may come in useful some day.