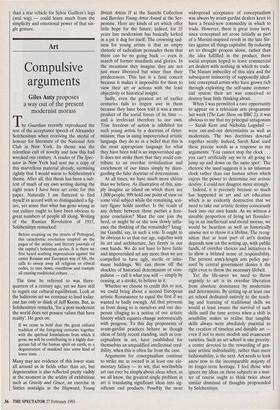 Giles Auty proposes a way out of the present modernist morass The Guardian recently reproduced the text of the acceptance speech of Alexander Solzhenitsyn when receiving the medal of honour for literature of the National Arts Club in New York. Its theme was the relentless cult of novelty and how this had wrecked our century. A reader of The Spec- tator in New York had sent me a copy of this marvellous material already, surmising rightly that I would warm to Solzhenitsyn's theme. After all, this thesis has been a sub- text of much of my own writing during the eight years I have been art critic for this paper. Naturally I am flattered to find myself in accord with so distinguished a fig- ure, yet sense that what has gone wrong in our culture ought to have been obvious to great numbers of people all along. Writing of the Russian Revolution of 1917, Solzhenitsyn remarked:

Before erupting on the streets of Petrograd, this cataclysmic revolution erupted on the pages of the artistic and literary journals of the capital's bohemian circles. It is there we first heard scathing imprecations against the entire Russian and European way of life, the calls to sweep away all religious or ethical codes, to tear down, overthrow and trample all existing traditional culture. .. .

The time he referred to was three- quarters of a century ago, yet we have still to regain our cultural equilibrium. Look at the ludicrous art we continue to laud today: one has only to think of Jeff Koons. But, as Solzhenitsyn remarks, 'for a post-modernist the world does not possess values that have reality'. He goes on:

If we cease to hold dear the great cultural tradition of the foregoing centuries together with the spiritual foundations from which it grew, we will be contributing to a highly dan- gerous fall of the human spirit on earth, to a degeneration of mankind into some kind of lower state....

Many may see evidence of this lower state all around us in fields other than art, but degeneration is also reflected pretty visibly at the moment in the aridity of exhibitions such as Gravity and Grace, an exercise in Sixties nostalgia at the Hayward, Young British Artists II at the Saatchi Collection and Barclays Young Artist Award at the Ser- pentine. Here are kinds of art which offer little hope for the future; indeed, for 25 years late modernism has basically lurked in a pit it dug for itself. The crowning sad- ness for young artists is that an empty rhetoric of radicalism persuades them that there can be no going back — even in search of former standards and glories. In the meantime they imagine they are not just more liberated but wiser than their predecessors. This last is a fatal conceit because it makes it impossible for them to view their art or actions with the least objectivity or historical insight.

Sadly, even the greatest art of earlier centuries fails to inspire awe in them because they have been told it was a mere product of the social forces of its time and is irrelevant therefore to our own. True freedom of action is inhibited for such young artists by a doctrine of deter- minism; thus in using impoverished artistic language they do so in a belief that this is the most appropriate language for what they have been told is an impoverished age. It does not strike them that they could con- tribute to an overdue revitalisation and enrichment of our times simply by disre- garding the false doctrine of determinism.

At all times, we have much more chbice than we believe. As illustration of this, sim- ply imagine an island on which there are 1,000 people; 999 hold one point of view on some vital subject while the remaining, soli- tary figure holds another. Is the result of any debate between these parties a fore- gone conclusion? Must the one join the herd, or might he or she now slowly influ- ence the thinking of the remainder? Imag- ine Gandhi, say, in such a role. It ought to be obvious to us that our age, together with its art and architecture, lies firmly in our own hands. We do not have to have futile and impoverished art any more than we are compelled to have ugly, sterile or inhu- mane buildings. We can throw off the shackles of historical determinism or com- pulsion — call it what you will — simply by ceasing, at a stroke, to believe in it.

Whether we choose to credit this or not, we could bring about a second European artistic Renaissance to equal the first if we wanted to badly enough. All that prevents us from doing so is ourselves and our des- perate clinging to a notion of our artistic history which equates change automatically with progress. To this day proponents of avant-gardist practices behave as though ideas of fairly recent standing, such as con- ceptualism in art, have established for themselves an unqualified intellectual cred- ibility, when this is often far from the case.

Arguments for conceptualism continue to strike me as rooted in at least one ele- mentary fallacy — to wit, that worthwhile art can ever be simply about ideas when, as we all know, the greatest single problem in art is translating significant ideas into sig- nificant end products. Possibly the most widespread acceptance of conceptualism was always by avant-gardist dealers keen to have a brand-new commodity in which to trade. However, there is great irony here, since conceptual art arose initially as part of a Marxist-inspired revolt in the late Six- ties against all things capitalist. By reducing art to thought process alone, rather than the idea fulfilled in the product, these social utopians hoped to leave commercial art dealers with nothing in which to trade. The blatant imbecility of this idea and the subsequent insincerity of supposedly ideal- istic conceptual artists who have grown rich through exploiting the self-same commer- cial system their art was conceived to destroy bear little thinking about.

When I was permitted a rare opportunity to appear on a television arts programme last week (The Late Show on BBC 2), it was obvious to me that my principal antagonists — Sarah Kent and Nicholas Logsdail were out-and-out determinists as well as modernists. The two doctrines dovetail together neatly. Indeed, Sarah Kent used these precise words as a response to my arguments: 'You cannot stop the clock . . . you can't artificially say we're all going to jump up and down on the same spot'. The rhetoric she used suggests it is an inhuman clock rather than our human selves which enjoys the power to determine our artistic destiny. I could not disagree more strongly.

Indeed, it is precisely because so much has happened in art and art education which is so evidently destructive that we need to take our artistic destiny consciously back into our own hands. As we witness a sizeable proportion of living art flounder- ing in an intellectual and moral morass, we would be heartless as well as historically unwise not to throw it a lifeline. The recog- nition that at least part of art's destiny depends now on the setting up, with public funds, of overdue choices and initiatives is to show a belated sense of responsibility. The present arm's-length arts policy pur- sued by central government denies it the right even to throw the necessary lifebelt.

Yet the life-saver we need to throw urgently to art is its overdue liberation from absolute dominance by modernists and determinists. By setting up at least one art school dedicated entirely to the teach- ing and learning of traditional skills we would at least ensure the survival of such skills until the time arrives when a shift in sensibility makes us realise that tangible skills always were absolutely essential to the creation of timeless and durable art even if not to more modish and evanescent varieties. Such an art school is one priority: a centre devoted to the rewarding of gen- uine artistic individuality, rather than mere fashionability, is the next. Art needs to look anew now to the incomparable majesty of its longer-term heritage. I feel those who ignore my ideas on these subjects as a mat- ter of course ought to think twice about similar dismissal of thoughts propounded by Solzhenitsyn.